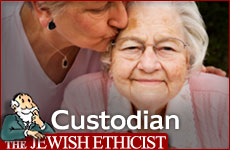 My mother is incapacitated. Should I be giving charity from her income?

Q. I am the custodian for my mother, who is no longer in full possession of her faculties. Should I be giving charity from her income?

A. The situation you describe is a sad but increasingly common one. Medical advances are prolonging life more quickly than they are prolonging our faculties, with the result that more and more people need help managing their affairs. It is sad, but fair, that children end up taking care of the people who did so much to take care of them.

The need for custodians for the elderly is more common than previously, but it is by no means new. The Talmud describes clearly the need for such a custodian:

One who has lost his faculties, the court takes control of his assets and provides for support of his wife and sons and daughters, and something else as well. (1)

The Talmud concludes that this "something else" is charity, so this would seem to be the answer to your question.

However, the question needs further study. This passage states only that the court can take charity from the assets – an exaction similar in some ways to a tax. It doesn't refer to the custodian doing so based on his or her own discretion. We have good reason to think that this case might be different. In several places, the Talmud tells us that the custodian for minor orphans should not give charity on their income.

We don't impose on them charity, or redemption of captives, or anything without a defined limit. (2)

A number of reasons are given for this in the commentators. One reason given is that it is inappropriate for the custodian to use his own judgment, given that eventually the children will grow up and be able to exercise their own. (3) This consideration would apply if your mother is expected to have occasional periods of clear judgment. In this case you should wait and see if it is possible to find a moment when she understands her condition and can express her wishes. Otherwise, this consideration would not apply.

But another consideration mentioned is that charity is an obligation with no set boundaries, as implied by the Talmudic passage we just cited. There are always needy people around and a person could liquidate all his wealth and still not satisfy all of them. The problem here is that there are no clear guidelines for the custodian to follow, and so the custodian's judgment is a poor substitute for that of the charge even if the charge will never be able to make his sentiments known.

For this reason, the custom is that if the extent of the charity obligation is well-defined, the custodian can give charity even from assets of orphans. The example given is where they orphans have poor relative who will be reduced to begging if their relatives don't help them, and the father used to give these relatives a fixed stipend each year. In this case there is a strong case to be made that this is the precise charity obligation that applies to the children as well. (4)

First, make sure that the law permits you to give charity from the assets under your control, and that giving charity is consistent with your responsibility as custodian to ensure that your mother is able to obtain her assets if she needs them. If these conditions are met, I think it is appropriate to give charity from your mother's income if there were certain fixed charities and amounts that she was accustomed to give. In this way you can provide her with the merit of giving charity without substituting your judgment for hers.

Many people are careful to write a "living will" clearly expressing their desires should they require other people to make decisions for them. It is a good idea to include charity donations in such a document, so that custodians have clear guidelines to fulfill your wishes.

The Jewish Ethicist: Job Hunt Disclosure
Near Death Experience Panel
The Western Wall: The Heart of the World
Ask the Right Question: Tisha B’Av
Comments
MOST POPULAR IN Current Issues
Our privacy policy
Aish.com Is Looking for Great Writers