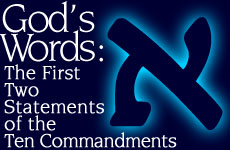 No day in history comes even close in the magnitude of its significance. It was a day when all the assumptions concerning life and its purpose were altered irrevocably.

The date was the 6th of Sivan 2448 according to Jewish dating or 1312 BCE. Over three thousand years have passed since that date -- the only widely acknowledged public experience with God in human history.

When I was growing up Charlton Heston was my Moses. The effect of seeing a cast of thousands, wind machines replicating the splitting of the sea, and Anne Baxter providing an interesting and distinctly non-biblical sub-plot had the effect of placing an opaque patina of mythology and kitsch over the entire event.

Only later in my life was I able to shake the movie off enough to realize that the (real) Ten Commandments are the most definitive statements of spiritual morality to ever be articulated.

In order to encounter God with this level of intimacy, the Jews had to open themselves to the point of being able to declare: "we will do and we will listen." They were willing to take on the actions that God commanded before they sought to grasp them intellectually. They had to submit their will to God's will, and worship Him, rather than worshiping their minds and hearts.

Each of the ten statements opens a door that moves a person beyond ego, desire, and subjectivity. The Maharal tells us that while these commandments are not "more "
important than any other -- by what scale could any human try to impose hierarchy of significance when talking about God's will anyway? -- they are nonetheless . This is because they provide us with the essence of the other 603 commandments.

They are the most important words we will ever hear. The first two commandments have special significance. They were given directly by God,without Moses acting as an intermediary. Let us examine them more carefully.

I am the Lord who took you out of Egypt, the house of bondage.

It seems at first glance to be a statement rather than a directive. The imperative that comes forth from this commandment is that we come to recognize that God's existence is not dependent on our willingness to serve Him. It doesn’t say "know Him" or "serve Him," because His essence is unchanged by our responses to His presence.

Once we let the truth of this statement sink in deeply our relationship to the entire Torah changes. God is not needy. We are. We all yearn for transcendence and meaning.

When we examine all that this commandment implies we can discover the means of achieving this end.

The Divine name pronounced as "Lord" is the Tetragrammaton. The Hebrew letters that comprise this name are the ones that also form the Hebrew time tenses. "He is, He was, and He will be." His unchanging compassion may take infinite forms, but His presence both transcends and permeates everything that we see, hear or touch. Once we know this we can search for Him in every possible experience.

The Hebrew word for God, Elokim, literally means "master of forces." God made His presence known to us through the medium of His creativity. Each creation in a certain sense has His signature engraved upon it. The vivid and forceful character of nature engages us so intensely that we allow it to distract us from its creator. When we see an awesomely arresting sunset we can let it open our hearts, or we can look at our watches and take note of the fact that the day is drawing to an end.

The word Elokim has the same gematria, or numerical value as the word ha-teva, "nature." God is present not only when He reveals His presence. He is there when He conceals His presence through nature, and challenges us to discover Him, and thereby discover our higher and most eternal selves.

God is not only present, He is involved. There are times that we question, "Where is God?" This question takes as many forms as tragedy has faces. The answer is always the same. He is and was right there. The word for Egypt is Mitzraim, which literally means "straits" or "limits." There are times when we feel as though we are choking. There is nowhere to turn and no place of refuge. It is at those moments that we can come closest to God as we rebuild our link to Him on the ruins of our shattered egos.

When we confront our fragility without blinking or hiding, we can transcend the limitations of our unceasing devotion of our desire to control events.

From the house of bondage ...

No slave had ever escaped the stratified society that was ancient Egypt. The plagues that forced the Egyptians into granting freedom to the Israelites demonstrated not only that God is aware of human suffering and willing to intervene, but also that He is both able and willing to break the laws of nature that He established.

Once we know this, the word "impossible" no longer has any meaning. While it is indisputably true that some outcomes are more likely to occur than others, the laws of nature are, in the final analysis, only creations. No matter how enslaved we are to external or internal "masters," there is always reason to hope.

When we recognize that God is the place in which the world exists, and that He is involved and unfettered by the laws of nature, never wavering in His compassion, then vast changes take place in us. Our fear of the world and of ourselves abates. We search for connection with a God who is present within every cell of our bodies.

The means by which we make this connection happen is through observing the positive commandments.

The Talmud tells us that when we heard the first of the Ten Commandments we were opened to accepting of all of the 248 positive commandments. This sum equals the number of limbs and organs. Each part of the body provides the soul with a means of tangible expression; none are at war with the soul. This idea is one of the most ideas of the Jewish religion. Rather than the body being a source of alienation from God, it is a means of taking our spiritual yearning for Him and giving it concrete physical means of articulation.

The number 248 also equals in numerical value the word Abraham. It was he who resolved the paradox that physical reality creates for so many spiritual seekers. Rather than escaping from the limitations imposed by living in the material world, he used it to act as a bridge to God.

It is for this reason that the Torah narrates the story of Abraham's hospitality to his guests with such detail. It is not to leave us with the feeling that we have just met the nicest fellow in all of Ur Kasdim. It is to give us a new definition of how to relate to God through using physical reality as a medium.

You shall have no other gods before Me.

This statement causes us to ask: Are there or are there not other gods. If there are, why should we not worship them? If they are not, why relate to them at all.

The answer lies in the wording -- elohim aherim, "other gods." The word Elokim truly should be used only for God Himself.

The sad truth is that rather than raising our own level of awareness to the point of livin moment-by-moment in God's presence, we tend to endeavor to bring God down to our level.

When we study the myths involving idols that played such a dominant role in history (and that have no lack of contemporary parallels), we cannot help but notice that they are representations of everything that we idealize in ourselves. In pantheistic systems of belief, what was worshipped is still what we can describe, observe and define.

The commandment of not worshipping idols thus confronts our tendency to escape God by deifying our desires and ourselves. We limit our sense of reality to that which we can see. There is no room for growth in idolatrous religion. There is only room for ego and desire.

When we truly hear this commandment we break through every possible barrier that the ego can erect -- at least, for the moment. We cannot serve any other force nor countenance any obstacle in our search for God.

This commandment is the source of the 365 negative commandments. Each negative mitzvah parallels a day in the solar year. Every day presents us with new challenges. We can escape them by redefining religious law, or we can define ourselves by our rejection of every possible temptation.

The two first commandments are compared to the kisses of a lover described in the King Solomon's "Song of Songs." The first is the kiss of connection, the second the kiss of exclusivity. May this Shavuot awaken our passion for God. May we accept Torah, as we never have before.

The Book of Ruth: A Mystery Unraveled