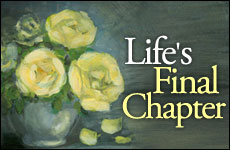 As I took care of my dying mother, a new bond was created.

I couldn't imagine saying goodbye to my mother. Bound together for a lifetime, we had passed through so many stages. Like many mothers and daughters we had first tried to make each other over in our own images and later had learned to accept and even enjoy our many differences -- at a comfortable distance. But now my mother was dying and I, her sole surviving daughter, was caring for her.

I had come from Jerusalem months earlier in response to some deep feeling within me that I needed to factor my mother into my plans. Though advanced in age, she was still enjoying a full and active life, even going on safari in Zimbabwe with me the year before. Yet, the inner call I heard to go be with her could not be ignored. So I went, though for the life of her she couldn't understand what had propelled me to come. She wasn't sick, she didn't need help. On what was I basing my decision?

Finally, having given up trying to understand me long ago, she happily accepted my visit of indefinite duration. Little did either of us know what was coming. Within weeks of my arrival my mother landed in intensive care with a life-threatening case of pneumonia. We couldn't believe it. It was as though God had sent me ahead of time to be there for her when she needed.

She had gone from the picture of perfect health to a death sentence overnight.

But that was only the beginning. After a total and spectacular recovery from the pneumonia she was suddenly diagnosed with end-stage esophageal cancer. By now we were reeling. Everything had changed so fast. She had gone from the picture of perfect health to a death sentence overnight. How could it be? We went over the sequence of events repeatedly, trying to digest the news. At the same time, we swung into gear to deal with the swallowing difficulties and pain that had suddenly overtaken her.

Life took on a new rhythm. We were thrown into working as a team almost instantly, and even took pleasure from our ability to deal with the many challenges the illness presented. For the first time since I was a child, my mother and I were together all day, every day. She had a sunny, eternally optimistic personality that never liked to delve into anything too dark or difficult. She had even taken in stride the news of her imminent death and begun to ready herself to leave.

I, while full of laughter and joy, was always probing the depths, looking for light in the darkness. I didn't shy away from my pain and distress at the news of her imminent death.

My mother's way of dealing had often appeared to me as denial. Yet now, I was beginning to see a certain strength and dignity in her way of navigating through difficulty. Likewise, my mother was beginning to appreciate my ability to go deeply into things and extract from them wisdom that opened new doors. She was taking me into her world at the same time I was taking her into mine.

It was all part of the miracle of this time. One day we would be dressing up in the long gloves and costume jewelry of bygone days as we tried in vain to clear through the decades of life still stuffed into the drawers and closets in my mother's room. My mother would regale me with stories that had us both laughing so much, it was hard to believe she was dying. Other days, she would hit the kinds of difficult feelings she had managed to stay on top of for a lifetime. And, with great courage and some trepidation, allow me to help her through them to new ground on the other side.

In the same rooms where she had tended to me, I was now tending to her.

I was also holding her more, letting her know through touch that she could finally relax and let go. She had been holding herself up valiantly for a lifetime, through losing her parents in the concentration camps of WWII, through the slow, agonizing death of her husband at a relatively young age, and through the devastating loss of my sister at an even younger age. Now it was her time to feel herself cared for and held as she had cared for and held others. The torch was being passed. Our lives had come full circle. In the same rooms where she had tended to me, I was now tending to her.

We were also talking more about matters of the soul. This had been an area I was more comfortable inhabiting than my mother. But now she was open to hearing and thinking about the spiritual dimension of existence in ways she hadn't been before. She would even venture off into her own forays into other worlds, sometimes when she appeared to be dozing and other times when she was talking but looking off into some distant place nobody else could see.

We marveled together at all that was happening. This time that each of us had dreaded was turning out to be an incredible journey. Buoyed by our experience, we decided to write a book to help those who would walk this road after us, to let people know that there is much life left to be lived and love left to be shared in the final chapter of life. But no sooner did we start to work on it than God intervened with a plan of His own. He let us know that the time had come for my mother to return her soul to her Maker, to take leave of her life in this world.

The last few days were even more awesome than the months that preceded them. I sat with her as she labored to leave, as she traveled between this world and the next, as she talked passionately with long deceased family members. And I readied myself, finally, to say goodbye.

In the months following her death, as I allowed myself to grieve and to absorb the enormity of the loss, I found a new bond with my mother and the other members of my family that transcended our lives together in this world. I felt them deeply with me as I slowly made my way back to Jerusalem and on to the life and family I am blessed with today. Endings transformed into beginnings. And the cycle of love continued, eventually allowing me to finish the book my mother and I started together years earlier and to share the blessings of this life's final journey. 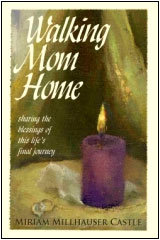 In her new book, Walking Mom Home, Miriam Millhauser Castle tells the story of her remarkable experience with her mother in her mother's last year of life. With warmth, wisdom and depth, she guides readers through the challenges of care-giving, the physical and spiritual realities of dying, and the unparalleled opportunity for parents and adult children to love, grow and come closer to God during this important chapter of life.
Like What You Read?  Give Jews around the world the chance to experience engaging Jewish wisdom with more articles and videos on Aish. It would make your mother so proud and as a nonprofit organization it's your support that keeps us going. Thanks a ton!

Miriam Millhauser Castle is a writer, teacher, conflict resolution specialist, and lawyer. She is the developer of the Inner Torah process and the author of Inner Torah: Where Consciousness and Kedushah Meet, and Practical Inner Torah: A Guide to Going Within. She lives in Jerusalem with her husband and can be reached through her website, www.innertorah.com

Truths my Father Taught me
Should I Break Up, Get Engaged or Keep Dating?
Time Is Your Precious Commodity
A Constant World in Flux
Comments
MOST POPULAR IN Family
Our privacy policy