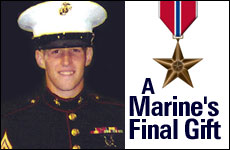 A few months ago, three American marines were profiled in the New York Times. A black rectangular box draws attention to their names: Amaru Aguilar, age 26. Kevin Balduf, 27. Benjamin J. Palmer, 43. All killed while fighting in Afghanistan. The Times’ reporter, Bruce Wallace, decided to seek out information on these unfamiliar names.

Kyle Balduf, Kevin's twin brother, relays how Kevin was in Afghanistan and out on patrol. He was not supposed to be there that day. A marine got sick and Kevin took his place. During that mission a gang of Taliban fighters opened fire on them. 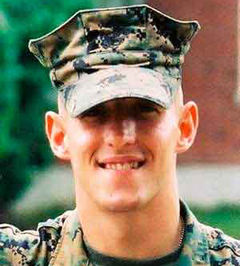 It was Kevin's job to call in an air strike. The problem was that Kevin had not yet received the level of training needed to do the job properly. But he did not give up. He picked up the map and tried as best he could. He managed to call in the coordinates. A few fighter jets were sent in to help rescue the men. Kyle says that quite a few lives were saved that day. Kevin received a Bronze Star.

But this act of heroism is not the part of Kevin Balduf's life that most inspires me.

It seems that when Kevin was a student in fourth grade, he was learning the concept of longitude and latitude. He told his teacher, Mrs. Burton, that the whole subject was stupid. He said that he'd never use it.

When he was in Afghanistan and had to call in the air strike while under Taliban fire, he used Mrs. Burton's lessons from way back.

"I was wrong,” he told his fourth grade teacher. “Latitude and longitude actually saved a lot of people's lives."

When returning home from battle, Kevin made a stop. He went back to his old elementary school and found Mrs. Burton. She was still teaching fourth grade. "I was wrong,” he told her. “Latitude and longitude actually saved a lot of people's lives." Kevin thanked his teacher for lessons learned so many years ago.

Kevin took the time to stand in front of the fourth grade class and told them his story. He thanked Mrs. Burton. He told them that they could do anything they set their hearts on, and that they had the power to change the world around them. This Bronze Star hero conveyed humility and gratitude, teaching the children in that fourth grade classroom the definition of genuine strength.

Kevin returned to Afghanistan and was killed in action.

What would happen if each one of us would take Kevin's final message – an attitude of gratitude – and make it a part of our lives?

Longitude and latitude are not just physical points on a map. Imagine if we would seek out those who have helped us find our emotional latitude and longitude; those who strengthened us as we found our direction in life. Remember the times we veered off course, or had trouble finding the right path?

Life is a journey and sometimes it becomes arduous and challenging. It can be difficult to find our way. The highway becomes long, choices confuse us, lines become blurred and without realizing it we are lost. We make poor decisions that may impact us forever.

Then we are blessed with that special person who illuminates our path. The one who does not allow us to be doomed to darkness.

Part of our human nature is to quickly forget and move on.

We are blessed to have individuals who inject us with fortitude, keep believing in us, wake us up, and prod us to think positively and to never give up. Those who gave us a life lesson – even way back in fourth grade – that has remained with us, enriched us, and maybe even helped us save some lives.

But part of our human nature is to quickly forget and move on.

Think about it. Who is that person or people in your life?

It may be a teacher, a friend from high school, cousin, neighbor, parent or sibling. It may be someone you haven't spoken to for years, but now a dim memory has been reawakened and you are drawn to find this person and express your gratitude. You have not forgotten.

Hakarat Hatov, recognizing and appreciating the good, is the foundation of Judaism. We begin each day by saying a prayer called Modeh Ani – thank You, God. Thank You for returning my soul to me and giving me another opportunity to make something of my time here.

When I become a person who lives with this understanding, I live with a grateful eye. I become a more positive person, cognizant of my blessings. I learn to recognize the good and not allow the negative to overwhelm me. I come to appreciate the gift of people in my life who I would otherwise take for granted.

Judaism imparts to us – from the moment we awake – that we must cherish life.

Kevin Balduf awakened within me a quest to spread this message. If you could, who would you call today and say: "Thank you for the latitude and longitude. I have not forgotten."

Stand Up Paddle Board and Facing Life’s Waves

The Prosecutor
Olivia Newton John’s Grandfather was a Nobel-Prize Winning Jewish Physicist
Don’t Believe in Other Gods Versus God is One
Seeing Without Eyes
Comments
MOST POPULAR IN Spirituality
Our privacy policy
Aish.com Is Looking for Great Writers