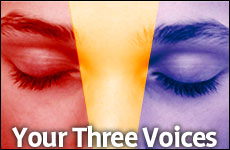 How to live an inspired life.

I'm hooked on spiritual adventuring. I love the feeling of adrenaline rushing through my veins. When Bethlehem was a hot spot, I found myself heading towards Rachel's tomb in the back of an army half-track, loving every second. And then there was the time that I felt a strong draw towards Yosef tomb in Shechem, before it became the charred shambles that is living testimony to the bottomless hatred of our neighbors.

On both occasions I was honest enough to know that there was a dual agenda. One was to move my spiritual muscles as far as my soul could reach by seeking inspiration, and the other was the drama of the trip itself through hostile territory that made me feel somehow more alive and aware.

My friend Aviva has a more conservative attitude towards spiritual escapades and views some of my hairier journeys through a somewhat jaundiced prism.

I tuned her out. The life that she spoke of resounded of the play-safe grayness of my childhood. It seemed to me then that most people's goal was to serve their time. Go to college and get that degree so that you can get that job and own that stuff. Retire and take Geritol, see the world as a tourist.

When I was introduced to the passionate and meaningful world of Torah, the grayness was replaced by deep shades of burgundy wine, black letters that fly off the pages, and the vitality of family life that is stunningly exhausting and brilliantly joyous with enough valleys and shadows to add self sacrifice and depth to the picture. What could be more in place that riding to Shechem in a bulletproof bus with nervous looking security guards and ending up in the quietude of a timeless spot in which something of Yosef can still be felt?

Well folks, I was wrong.

Life is about mindfulness, choice making, and caring for each minute for the treasure that it is.

God bless her, my friend Aviva had it right to begin with. The classic work, The Path of the Just, tells us that life is about mindfulness, choice making, and caring for each minute for the treasure that it is. Don't take the greatest gift of all and treat it with distain.

Treasuring life and being mindful doesn't mean relegating life to being an eternal bookkeeper. Quite the opposite, it imbues ordinary experience with that illusive something called depth. The problem is that hardcore inspiration comes and goes. Falling back into the old pattern of grasping at whatever brings immediate shallow but exhilarating gratification is no doubt the hardest obstacle of all. How do you stay inspired enough to keep on going day after day?

The Path of the Just tells us that there are three voices that we have to learn to hear in order to stay inspired without needing a continual fix of external stimulation.

The first one is our own voice, the one that we are most familiar with, the one that knows who we are, who we want to be, and what we want take with us in the end.

America in the 20's was a different world. When Yankel Greenberg arrived at Milwaukee, after a bone rattling train ride that brought him to the heartland of a country that was far more foreign than anything he could have imagined, his brother was on the platform to greet him. It took a heartbreaking two minutes until he realized that the clean-shaven bareheaded fellow waving at him was Chaimke. Yankel realized immediately that he was a stranger in a strange land, and that life here would never resemble the life he left back in Lithuania.

They embraced, wept and asked each other no questions. "How will Chana feel when she gets here? How will I let the kids know that they are still Jews?" Yankel heard his heart loud and clear, but all he allowed himself to say were words of gratitude for his only brother who had reached the land of opportunity six years earlier.

The next morning Chaimke took him to the store. "There is plenty of work for the both of us. We'll expand, split the profits. This is the only dry goods store for miles, and I have a knack for knowing what people want. All you have to do is learn a little English, and you have it all made! How soon can Chana and the kids come?"

His brother's caring and genuine joy at having the opportunity to help him moved Yankel.

"There's just one thing. In America we work on Shabbos. Saturday is what they call it here, and it is the most important day in retail."

Yankel managed to avoid working on Shabbos for several weeks. One week it was a headache, and the next week a stomachache. They both knew the truth, but it was only when Chana came that the unspoken words were finally said. "You have a family. If you can't work on Saturday, then you can't work at all."

The first week, Yankel knew would be the hardest. He got up in the morning, ready to do what he had to do to keep his family alive in planet America. Chana laid out his clothes. Clean underwear, socks, and his faded black Shabbos suit vest and the silk tie that had never seen a weekday. "Put them on, even if you have to go to the store. It's still Shabbos." He dressed slowly, entered the store and stood behind the counter waiting for the day's first customer. It was early and he began to tidy up the shop. He suddenly caught a glimpse of himself in the long mirror that fronted the dressing room. He saw the person that he wanted to be, and decided with absolute belief that that is the person that he somehow would remain.

He left the store slowly, went home, took the heat of his brother's guilt ridden rage, and eventually opened one of the first Shomer Shabbos stores in Milwaukee. He had managed to collect used items (some might have called it junk), specialized in used furniture and eventually branched out into new furniture. His great grandson-in-law is one of Jerusalem's senior Torah personalities.

The month of Elul is the time for listening to our own voice. Hear it tell you who you really are. Take the time to review your life and treasure the moments that reflect the choices that you made with integrity, the moments that tell you that you can be true to your highest self.

THE VOICE OF AMBITION

The second voice is the voice of ambition. We have to learn to ask not just "who am I," but "who do I want to be?" Role models that tell us what we have to own, who we have to look like, how much we have to earn, surround us. We can change gears and look at the people whose lives were or are worth living and let them become our new role models. The people who made the world a better place, who made themselves better people are the ones who should set our pace. Keep a picture of someone who you really admire. It can change things more than you realize as you find yourself walking the extra mile to prove to yourself that you can do it.

THE VOICE OF CONSEQUENCES

The third and final voice is the voice of consequences. Every choice we make has a consequence. We can either ignore thoseconsequence or make intelligent choices that empower us to write our own scripts. One example is committing ourselves to be more constructively involved in our kid's lives. Choose creative meaningful involvement, you have a lifetime friend. Choose to marginalize your kids, you will have at best a strained and superficial relationship with them as both you and they grow older. Have a vision of what you want your family to be like, and hold onto it with both hands. The vision can be your inspiration when things get tricky, and your comfort when you face temporary failure as every parent did since time immemorial.

Life is too valuable and too brief to live in the gray zone. Learn to hear new voices, and stay really alive.

After the Cancer Diagnosis