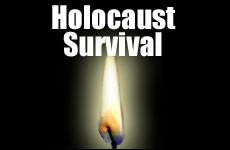 With the help of God, the Jewish people will outlive their cruel foes and emerge triumphant in the end.

The pious Jewish inmates in Bergen-Belsen were determined to kindle Chanukah lights and chant the appropriate Hebrew blessings. They were abject slaves, temporarily permitted to live and toil until their strength gave out. Death lurked on all sides. Even if they could manage to avoid detection by their taskmasters, they lacked the essential materials: Chanukah candles and a Menorah.

Yet, a seemingly impossible celebration came about on the first night of Chanukah 1943 in Bergen-Belsen. One of eleven fortunate survivors, Rabbi Israel Shapiro, better known among his Chasidim as the Bluzhever Rebbe, was the central figure of that macabre Chanukah celebration.

Living in the shadow of death, and not knowing when their own turn would come, the Jewish inmates were determined to celebrate Chanukah in the traditional manner and draw whatever spiritual strength they could from the story of the Maccabees.

• From their meager food portions, the men saved up some bits of fat.

• The women, for their part, pulled threads from their tattered garments and twisted them into a makeshift wick.

• For want of a real Menorah, a candle-holder was fashioned out of raw potato.

• Even Chanukah dreidels for the dozen children in the camp were carved out of wooden shoes that the inmates wore.

At great risk to their lives, many of the inmates made their way unnoticed to Barrack 10, where the Bluzhever Rebbe was to conduct the Chanukah ceremony.

He inserted the improvised candle into the improvised Menorah and in a soft voice began to chant the three blessings. On the third blessing, in which God is thanked for having "kept us in life and preserved us and enabled us to reach this time," the Rebbe's voice broke into sobs, for he had already lost his wife, his only daughter, his son-in-law, and his only grandchild.

The assembled inmates joined him in a chorus of weeping, for all of them had also lost their own families. In low voices, choked by irrepressible sobs – they struggled to chant the traditional hymn, Ma’oz Tzur, which proclaims steadfast faith in God, the Rock of their strength.

On regaining some composure, the Rebbe tried to comfort them and instill new courage and hope. Referring to the words of the second blessing ("that He wrought miracles for our fathers in days of old"), the Rebbe asked, "Is it not anomalous to thank God for miracles that he had wrought for our ancestors long ago, while He seemingly performs none for us in our tragic plight?"

In answer to his own question, the Rebbe said, "By kindling this Chanukah candle we are symbolically identifying ourselves with the Jewish people everywhere. Our long history records many bloody horrors our people have endured and survived. We may be certain that no matter what may befall us as individuals, the Jews as a people will – with the help of God – outlive their cruel foes and emerge triumphant in the end."

Hope in Hell
Blessing on Chewing Gum
Was Rahab a Prostitute?
Extras In Our Own Epic
Comments
MOST POPULAR IN Chanukah
Our privacy policy