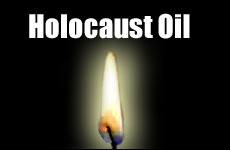 At the conclusion of every 16-hour work day in the hell called Bergen-Belsen, the block commander liked to have some fun with his Jews.

The meal at the end of the day consisted of old dry bread, filthy watery soup and a pat of something like margarine made from vegetable fat.

The margarine was scooped out of a large tub, and after the meal had been distributed and the tub was empty, the commander allowed the starving prisoners to jump into the empty tub and lick the remaining margarine from the walls of the tub. The sight of starving Jews licking up bits of margarine provided nightly entertainment for the commander and his guards.

One prisoner, however, refused to be a part of the commander's show. Though like all the rest he was a withered, starving shadow of a man aged far beyond his years, still, he would never allow himself to scavenge for a lick of margarine. The other prisoners called him Elijah. In some unspoken way, the others drew strength from Elijah's refusal to join the frenzy.

Then, one night, something happened that seemed to shatter whatever spirit remained in the prisoners. Elijah cracked. All at once he threw himself into the greasy vat and furiously rolled around like a crazed beast .

And how the commander howled. It was a deep belly laugh of satanic satisfaction. The last of the Jews had been broken.

Later, after the guards left and the Jews were in their barracks, Elijah took off his shirt and began to tear it to shreds.  The others looked on in silence. Had Elijah gone mad?

He would study the shirt for a moment, carefully looking it over, as if searching for some exact location, and then tear that area into a strip.  He looked up. His eyes were on fire.

"Do you know what tonight is?" he demanded. "Tonight is the first night of Chanukah."

Elijah studied the shirt again, finding another choice spot to tear. A spot he had purposely saturated with grease from his roll in the margarine tub.

That night Elijah led the others in the lighting of the Chanukah flames. The wicks came from the strips of his shirt, and the bits of margarine Elijah had furiously scavenged was the oil.

My Grandfather, the Walking Miracle