The Blessing of a Rented Room 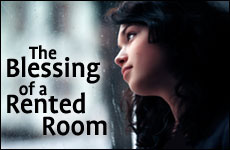 I was 36 years old and running out of options

With no tears left, I sat on my bed, numb. Two weeks before starting my new teaching job, my roommate told me that I had to move out by October first. Under normal circumstances, I would have given myself a pep talk, trusted it was for the best and found a better situation. But just six months earlier, I had left a beloved city and friends of 13 years to move closer to my family -- my mother's heart had stopped, leaving the vivacious and healthy woman she was in a coma. And several weeks before my roommate's news, my grandmother was diagnosed with cancer. My emotional reserves were gone.

The thought of being a boarder made me cringe.

Phone call after phone call unearthed no possible apartments. My new job started, and I began to panic. I knew of women in our town who boarded with a family, but the thought of being a boarder made me cringe -- I was 36 years old and had lived for six years in my own apartment. But I knew I was running out of options.

I called our landlady upstairs -- Mrs. Pemberg -- and asked if I could store my furniture in the basement until I found a boarding situation.

"We've been wanting a boarder," she replied.

"What?" was my dumbfounded response; no, it couldn't be that easy.

I went up with her right then and looked around -- the large room next to the guest bedroom and playroom, the long hallway, old kitchen turned laundry room complete with mini-fridge, sink and counters, and a beautiful bathroom just for me. It seemed that despite my 36 years and strong independent streak, or maybe because of them, the Almighty was turning me into a boarder.

It was erev Rosh Hashana when the yeshiva students maneuvered my old pressed board dresser and wood desk around the narrow staircases and corners. They got everything up the regal old stairway leading from the first floor entrance to the second floor where the family lived. A sharp turn brought it all next to the girls' room, past the crib and bunk beds, then up another flight of a steps to the third floor. Thick, plush carpeting led up to and into my room, padding the floor and blanketing me all around.

It was so peaceful up there. I would hear the muted goings-on of the Pemberg family -- a rowdy house of five young girls and their parents -- but in my cozy abode it was quiet. I drove back and forth to the nursing home where my mom lay, started my new job, sat shiva a little over a month later and battled the depression that followed. I hid from life in my calm room with the rumblings of happy family life beneath me.

Sitting on my bed tucked into the corner, looking out the long windows, I had the space to wander through the complexity of that time. As a single woman in a house of babies, preschoolers and school-agers, I managed to be safely distant from the busyness and bustle. When I wanted connection, though, they welcomed me. And somehow, they took care of me, too -- listening when I needed an ear, giving words of strength, allowing me my space. The girls would wander into my room -- rock on my rocking chair, read my preschool teacher's children's books, just say "hi" and chat. And as I re-entered the dating world, they watched in wonder as I chose outfits, blow-dried my hair and squinted in the mirror to apply eyeliner.

If even they said "no," would anyone ever really say "yes"?

Their mom, Miriam, greeted date after date, often sending one of the girls to let me know that the doorbell was indeed for me. She listened to the sagas as I said "yes" to second dates with men whose social etiquette was questionable, like the one who asked questions and kept talking without ever waiting for the response. And she commiserated when those same guys said "no" to me, leaving me wondering -- if even they said "no," would anyone ever really say "yes"?

One evening, I received a cryptic message on my voicemail from a matchmaker friend: "New baal teshuva, [returnee to Jewish observance] hot off the presses, really nice guy, give him a chance." Knowing it would be fine with me, she had given him my number already -- that's how my friend and I worked together. When the mystery man called, we were on the phone less than ten minutes, mostly setting up our date and giving directions. I had barely hung up when I ran down to the kitchen.

"Miriam, that was the perfect phone call, but I refuse to get my hopes up!"

"I hate when a guy says 'Let's have dinner', what if I don't want dinner? Or the ones who say 'So, what do you want to do?' and throw the whole thing in my lap without thinking. But he said, 'So what do people do for dates around there?' It was perfect!"

She smiled, waiting for more, knowing all too well more was coming.

"And I told him about Barnes and Noble, and he told me about this library that he had heard about that set up a coffee bar."

She grinned, laughing silently at my enthusiasm.

"But I'm not getting excited!"

"I'm going upstairs!!" Chuckling at myself along with her, I threw a mischievous grin over my shoulder and went up to my room to wait for Thursday.

Miriam answered the door, and called up to announce his arrival. As I passed Miriam on my way to get my coat, she gave me a thumbs-up sign -- a first for her. I threw a "Bye!" over my shoulder, stretching the word to two syllables. As I descended the stairs, I saw him waiting, and quickly agreed with her assessment. I followed him out onto the porch and to his car as we began to chat. Before even arriving at our destination, we discovered several people and places in common, most involving individuals and places several states away. When he asked me in the bookstore what book had had the biggest influence on me, I relaxed in my chair, relished answering thoughtfully and watched him as he listened.

We went on a second date, then a third, and then the seven-hour fourth date when I could no longer deny something was going on. The carpeting on the back stairs wore thin as I ran up and down, sharing tidbits of phone conversations, news of upcoming plans and details of the adventures of getting to know each other. Consulting on clothing and jewelry became the older girls' jobs.

I remember walking up the grand stairway at 11 P.M. that one special night, so excited I practically bounced, only to be shocked by quiet hallways and dark rooms. I heard noises from the Pembergs' bedroom, so I jiggled my keys loudly and waited. Miriam poked her head out, curious and hopeful, since I had left for the drive to meet his mother over 12 hours earlier. She smiled, I nodded, and they both came out in robes and listened for close to an hour. We all stood talking and grinning in the dim hallway in front of the older girls' room. Laura, then five years old, came out drowsily and her father shared the news of my engagement -- "Lisa's a kallah!" -- prompting a sweet, sleepy smile. When we finally finished, I headed upstairs, exuberant with the news, to the warmth of my quiet room.

Two and a half more months followed of talks at the dining room table and modeling the wedding dress and hairstyle. Finally, the time arrived to carry the boxes back down the stairs. It was just less than a year since the yeshiva boys had lugged the furniture up. Now it was carried down by Rabbi Pemberg and my chassan, my husband-to-be, winding its way through this home that had nurtured me for the past 12 months. Giving a last glance at my room, I walked slowly down the carpeted stairs and out onto the large wooden porch. I headed down the sidewalk toward my new apartment, just a few blocks away, the sturdiness of the concrete under my feet and the freshness of the breeze on my face.

Excerpted from the upcoming anthology Everyone's Got a Story -- 41 short stories from a new generation of Jewish writers, edited by Ruchama K. Feuerman (Judaica Press, May 2008). Click here to order.

Lisa Compart is a teacher and writer who lives with her husband and son in Passaic, NJ.