The Jewish Ethicist - Pay Up! 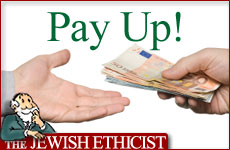 Q. A person owes me a large court judgment from damage he caused when he was well-off. Now he claims I should leave him alone since he has become destitute. Must I lay off?

A. In the time of the Torah, financial markets were not well developed and the main form of loan was an interest-free loan to a needy person to tide him over in a difficult time. Conversely, giving a loan was the preferred method of helping a needy person. We can see this from the following passage (Deuteronomy 15:7-8):

"When there will be among you a needy person from among your brethren, in one of your gates in your land which the Lord your God gave you, don't harden your heart and don't shut your hand to your needy brother. Surely open your hand to him and lend him on pledge according to his needs which he lacks" (Deut. 15:7-8).

The following verse warns us not to refrain from lending in anticipation of the release of the Sabbatical year, reinforcing the message that the primary form of help is a loan.

Given the Torah's constant concern for the welfare and dignity of the poor and needy, we are hardly surprised that we are commanded to be thoughtful towards the poor person not only when he takes the loan, but also when the loan is due. We see this from the following commandment:

"When you lend money to My people, to the poor among you, don't be to him like a creditor; don't impose interest on him"(Exodus 22:24).

This commandment forbids the creditor from gratuitously harassing the borrower, which could cause him shame. The Talmud adds that the lender should avoid even showing himself before the borrower. (1) Making himself seen more than he ordinarily would is a clear hint that payment is demanded. (2)

However, this prohibition is balanced by two additional provisions:

Your case does not fit the general mold of this prohibition. Most of all, you don't have certain knowledge that the tortfeasor is destitute, and you are not required to take his word for it. In addition, the debt did not originate with a voluntary agreement to help someone out, nor with an indigent individual. There is no reason you can't proceed with collection action given this state of uncertainty and blame, which correspond with the state of certainty and reciprocity described in Maimonides.

However, if you ever should become convinced that this person has no ability to pay, then it would seem gratuitous to keep on pursuing him. Irrespective of the prohibition on harassing and indigent borrower, pursuing a vain vendetta is bad not only for the victim, but for the pursuer as well. Do your best to collect your debt, but keep focused on the practical goal of getting your money.

The Jewish Ethicist: Leading by Example

Morality in the Workplace
Chukat 5782: Let’s Play the Blame Game!
The Sin of Moses: The Two Ways to Communicate
In Aftermath of Chicago’s July 4th Shooting, Local Moms Provide Countless Points of Light
Comments
MOST POPULAR IN Current Issues
Our privacy policy