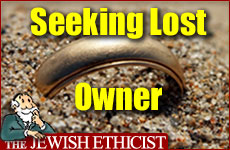 Q. Many unmarked articles of clothing were left in a local hall after an event. How much effort do I need to exert to find the owners?

A. Returning lost objects is an important commandment. It is mentioned twice in the Torah, and is also the topic of an entire chapter of the Talmud.

The Torah writes (Exodus 23:4): "When you encounter your enemy's ox or his ass wandering, surely return it to him."

What happens if the owner is not at hand? Later on we read (Deuteronomy 22:1-3):

These verses tell us a number of things:

But the plain sense of the verses also leaves much unanswered, including your question: how much effort?

This question is however dealt with by the Talmud.

Originally, anyone who found a lost object was required to announce it three [successive] holidays . . . Since the Temple was destroyed (may it be speedily rebuilt), they instituted that a person should announce in the synagogues and the study halls. (1)

The significance of synagogues and study halls is that they are public places where it is most likely that the original owner, or someone he knows, will hear of the find. In your case, you would have to judge what forum is likely to be familiar to the people who were at your event or are one "degree of separation" away. A good place to start is the forum where the event was originally announced. In this day and age, it is quite likely that this will be a virtual venue and not a physical one, for example the Facebook page of someone known to most people at the event.

The continuation of the above Talmudic passage explains that anyone announcing a lost object should give only a general description, and surrender the article only if the claimed owner provides identifying characteristics. The concern was that someone who is not really the owner could be merely pretending in order to obtain a valuable object. It then goes on to say that if the suspicion is great, the claimant should be carefully interrogated.

Nowadays the deviation from the "default" standard would be in the opposite direction. Today it is quite unusual for people to fake a claim for a lost piece of clothing; anyone who wants to steal a garment will find it quite easy. Furthermore, the people answering your ad will likely be trustworthy individuals. Therefore, in my opinion if someone responds to your announcement and asks what was lost, it is not improper to give them a fairly specific idea in order to help them along.