My Grandfather's Diary of Hate 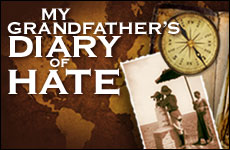 Little did I know that my grandfather, a British officer stationed in Palestine in 1943, was a Nazi sympathizer.

Three years ago my parents asked me to store a trunk for which there was no space in their new, smaller house. I was delighted because I recognized it from my childhood -- it was kept at the back of a cupboard, underneath heavy sets of encyclopedias and old records, and only on rare occasions was my father persuaded to lift everything off it, drag it out of the cupboard, find the key in among hundreds of others in an old shoe box, and open it up.

But when he did... what a treasure trove! Photographs of long-dead relatives in Victorian dress had me enthralled for hours, along with letters from people I never knew, but whose handwriting I came to recognize, about times and travels that to my 1960-born eyes seemed impossibly ancient and romantic.

Perhaps most intriguing was an envelope of small, black and white photographs, white-bordered with curly-cut edges and stamped "Approved Military Photographer" on the back. Some were of ferries crossing fast-moving rivers in jungle settings, watched by half-clad African men and children, and over-dressed, pith-helmeted British soldiers. There were others, too, of places I couldn't identify then, but later became very familiar with -- the Damascus Gate, Temple Mount and others landmarks in and around Jerusalem, all with the same stamp on the back and many with annotations in a spidery handwriting.

My involvement in anti-apartheid politics created a gulf with my grandfather.

My grandfather was never close to any of his grandchildren: The son of a stern Victorian priest, his upbringing led him to regard children generally as rather a nuisance, at best. Our upbringing was also quite alien to him, taking place largely on farms in Zimbabwe and South Africa, both very much wilder, freer places and times than his turn-of-the-century, stiff, conformist British childhood. Our involvement in anti-apartheid politics created even more of a gulf: the moral impulse that compelled us to take an active stand against prejudice was incomprehensible to someone of his background, for whom conformity and maintenance of the status quo were all-important.

Perhaps the only times he and I ever had anything resembling a proper conversation were before and after I went to Israel. He showed me his black and white photos, explaining the annotations on the back, and asked me to take new photos so he could see how the places looked some 45 years later.

When my parents asked me to store the trunk for them, I was delighted. I would be inheriting a large collection of my grandfather's photos, along with his precious old camera, still in its original leather cover. Finally I'd have the opportunity to explore the contents of the trunk more fully and could even get right down to the bottom, to the things I'd never reached before. I was intrigued by my grandfather's war photos and hoped to find out more about the five years he spent in the Sudan, the Belgian Congo and what he always referred to as Palestine.

Near the bottom of the trunk I found a brown paper-covered notebook, filled with the same spidery handwriting that I recognized from the annotations on the back of his photos. I realized this was my grandfather's war diary, which I knew existed but had never seen before. My mother had only ever referred to it in passing, saying that no-one had read it as his handwriting was "worse than a doctor's." I was thrilled to find it: Knowing how meticulous were his records about his antique porcelain and silver collection, with receipts neatly filed for each item, I was sure the diary would plug the gaps in my knowledge.

To my disappointment, most entries were simply a banal record of how his job as an engineer in the British army progressed -- e.g. "In the office today. Ordered parts but don't expect them to arrive soon. Very hot."

I nearly gave up the hard slog of deciphering his handwriting, but then I came to some entries dated 1943. These entries fundamentally transformed the way I felt about the man who wrote them.

In essence, these entries were a vitriolic attack on the Jews in Palestine, especially those who were refugees from Nazi Europe, whom he regarded with the utmost contempt. The diary expressed sentiments that I can only describe as abhorrent, not just because they were anti-Semitic (bad enough in itself), but because they were specifically targeted at those who had escaped the unspeakable hell of Europe, to whom he showed callous disregard for their suffering.

These entries were also quite shocking, as I had no inkling that my grandfather harbored such attitudes toward Jews. When I told him of my plans to spend a year on a moshav in my early 20s, when we went through his and my photographs from Jerusalem, when I introduced him to my first love, an 18-year-old Jewish boy -- on none of these occasions and at no other time could I recall even a hint of anti-Semitism.

The British military were well aware of the Holocaust, and some supported these policies.

Shocking, too, because what he wrote made it clear, in no uncertain terms, that as early as 1943 the British military in Palestine were very well aware of what Hitler was doing to Jewish people in Europe, and that though they were fighting against Hitler, some of the British military most definitely supported his policies.

Although I do not bear responsibility for my grandfather's thoughts or beliefs, reading the diary left me feeling deeply shamed and sullied. After reading the diary, I took off work because I couldn't concentrate on anything -- for over a week all I did was cry and cry and cry.

I came to understand that my own sense of personal shame and hurt are less important than the possibility that this awful diary can serve a redemptive purpose. For that reason I include here some excerpts, with a warning that they are deeply offensive:

"...All the military here getting very fed up with these damn Jews who do nothing but yell for help from us because they are getting bumped off by Hitler and yet they do nothing but try and hinder our war effort in Palestine by every possible means. We all hope the Arabs here will give the Jews hell after the war is over -- and in the meantime we also hope that Hitler will go on bumping off as many as possible. Absolute scum that they are, thinking of nothing but lining their own pockets."

"...as usual the Jews look after themselves, and let the war effort go to hell -- it is no wonder they are so universally detested. I feel it is a great pity Hitler hasn't exterminated more of them. They reminder me of the story of manure -- spread all over the place it isn't too bad, collect it in a heap - as they are here -- it stinks to heaven, and they have the infernal cheek to say that Palestine is their home -- not only are they very much in the minority here compared with the Arabs, but they were booted out of here 2000 years ago and have been homeless ever since and a damn good job too. The genuine Palestine Jew isn't too bad, but the refugee immigrants are the bloody scum of the earth and they are the ones causing all the trouble -- expecting us to do their fighting for them -- while they sit back and make fortunes at our expense."

In a later diary entry, my grandfather crowed about having bought a camera from a German refugee, "beating him down" so that he got it at a good price. A refugee from Germany arriving in Palestine in 1943 could only have been Jewish and must have gone through hell to get there. How despicable that my grandfather could have so blatantly and with such delight taken advantage of someone's desperate circumstances for his own benefit. But how ironic that this was the camera used to take the "Approved Military Photographer" pictures that I found so fascinating as a child and which, in turn, sparked my interest in the diary and so brought to light my grandfather's awful sentiments.

How ironic that the camera I found so fascinating as a child, brought to light my grandfather's awful sentiments.

Even now, some three years later, the sense of shock is overwhelming at times. And it gets me to wonder: Who is ultimately responsible for the Holocaust? The answers are many: Hitler, Nazis, Germans, governments, media.

The kinds of attitudes my grandfather had were what made it possible not only for a Hitler to emerge, but more importantly, for all his foot soldiers, who actively carried out his policies, to do what they did during that shameful time. In that sense, I feel that my grandfather, with his vitriolic attitude, was complicit, too.

Since my unpleasant discovery, I have undergone a process of disengagement from anything even vaguely relating to my grandfather, which involves slowly but surely removing all traces of him from my home.

And the camera? That is now at Yad Vashem, the Holocaust museum in Jerusalem. There it has a fitting home in the collection of artifacts, brought together from that tragic period.

How I Survived the Kovno Ghetto

Zeide, Did You Cry?
The Blue Beyond
Great Place to Live
Is Eating Supposed To Be Spiritual?
Comments
MOST POPULAR IN Holocaust Studies
Our privacy policy