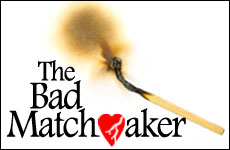 I resolved to make one match a week, for one year. After all, even a broken clock is right twice a day. How wrong I was.

Over the years many singles have turned to us hoping that we could help them find their spouse. But after a handful of matchmaking efforts that resulted in a handful of failed first dates, I started explaining to inquiring singles, "Look, some people have it, and some people don't, and my husband and I definitely do not have it."

But my older single friends were celebrating more and more birthdays, and fewer and fewer engagements. I realized that I might have thrown in the towel too early.

So a year and a half ago I made a resolution to spend the coming year making one match a week. Out of 52 first dates, there would have to be at least three or four good matches, right? After all, even a broken clock is right twice a day.

I bought myself a box along with a pile of index cards for interview notes and a pile of books with titles like Finding Your Spouse in 30 Days, and I went to work.

From my very first phone call as a matchmaker, I felt the amazing thrill of setting up two potential soul mates. I was hooked.

From my very first phone call as a matchmaker, I felt the amazing thrill of setting up two potential soul mates. I was hooked. For the next 12 months, all I wanted to talk or think about was making matches.

As soon as my children were in their beds, I was on the phone pitching a match idea, or interviewing a new single, or calling more experienced matchmakers to get advice about dating situations that I did not know how to handle.

The first couple I set up was two American singles in their mid-twenties. They were both highly-educated, attractive, and on a similar wavelength religiously. The clincher was that she was a poet and he was an artist, and both of them were in search of someone "creative." It was a match made in Heaven! Imagine hitting the jackpot on my first try!

He called me back after the first date. "Thank you very much Mrs. Weisberg. She was very nice. But she wants to live in Israel, and I am probably moving back to the States. We decided not to go out again." I was shocked. How important is a little detail like geography when we were talking about love and destiny?

This matchmaking business was not going to be as easy as I'd thought.

Over the months that followed, I eagerly set up dozens of first dates that didn't go anywhere. "Thank you very much, but I am looking for someone more modern," "... I did not feel any chemistry with her," "... he's just too serious for me."

But I tried to keep a positive attitude and kept on setting up more dates. I was receiving calls every day from new singles, and became so busy there was a waiting list to see me.

A few months later, there was good news from my artist. I had set him up with a musician and the first date went very well. "She's amazing!" he exulted to me over the phone. "He's wonderful," she agreed.

I imagined their wedding, them standing underneath the chuppah, me dancing in the center of all of the guests with the bride.

There was a second date, and a third date, and they seemed to be crazy about each other.

After the fourth date, my artist called me and he sounded nervous, "Thank you very much for everything you've done, but I realize that I am not attracted to her physically."

Ouch. No fifth date. No engagement. No wedding. It hurt so bad, I felt like I was the one who had been dumped.

After that heartbreak, I learned to maintain a bit more emotional distance from my matchmaking, and I kept on setting up dates at a rapid pace. But over the course of my whole year as a matchmaker I did not manage to make one successful match that ended up in a marriage.

Turns out a broken clock is a whole lot more accurate than a bad matchmaker.

But my year of matchmaking was not wasted, and here's why.

Just as badly as singles need matchmakers, they need married people to serve as "dating mentors to hold their hand through the dating process."

Early on in the year I attended a matchmaking workshop in which the facilitators, Aish.com dating experts Rosie Einhorn and Sherry Zimmerman, told participants that just as badly as singles need matchmakers, they need married people to serve as "dating mentors to hold their hand through the dating process." In order to make good decisions, singles are often desperately in need of some good, sensible advice about dating from married people who have had a glimpse of life from the other side of the chuppah.

And this advice led to the most rewarding aspect of my year spent as a matchmaker.

When a 30-year-old single friend asked me if she should take some time off from a masters program in order to travel to America to continue dating someone she had been dating for a month, I said "Yes!" Today, she is married.

When a 27-year-old single friend was unsure whether to accept a proposal of marriage, she asked me whether it was normal to have doubts. I told her that while getting married is a decision to make very carefully, it is also a decision that requires some leap of faith. Today she is happily married.

When a 28-year-old single I had set up several times called me to get advice about someone she was dating seriously, she explained that he is a convert, but when discussing his past with new people, he avoids mentioning his conversion. Does this mean that he has a tendency towards dishonesty? I assured her that it was not. Today she is married.

None of these brides will name their firstborn daughters Chana. But each of them did call me to personally tell me that they were engaged, and to offer a special "thank you."

It doesn't take ten hours a week of interviewing and phone-calling and brainstorming to make a difference. Often it just takes the dash of chutzpah to ask your single friend, "So, have you been dating anyone new recently?" and a willingness to open your heart and listen.

Even the worst matchmaker in the world can do that.

Breaking Up is Hard to Do

4 Ways to Create a Strong Relationship

Still Single after All these Years

5 Ways to Show Confidence while Dating
Olivia Newton John’s Grandfather was a Nobel-Prize Winning Jewish Physicist
Don’t Believe in Other Gods Versus God is One
Seeing Without Eyes
Comments
MOST POPULAR IN Dating
Our privacy policy
Aish.com Is Looking for Great Writers