When the Bough Doesn't Break 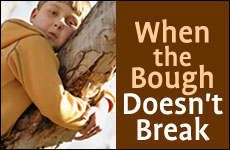 My life changed when instead of looking at my son as a punishment, I began looking at him as a blessing.

My first son, Ronnie, was born on a beautiful day in May 1969. He was, naturally, the most beautiful baby I had ever seen. Three days later, my husband and I took Ronnie home, and we began our new life as a family of three.

By the time Ronnie was two, his golden hair framed two brilliant sapphires that glistened beneath a long forest of eyelashes. He knew the alphabet, could count to 10, and, though wary of others, he was very affectionate with my husband, my parents and myself. In short, Ronnie was a very happy toddler. He loved to play hide-and-seek, and he quickly learned to swim in the above-ground pool we had in our backyard. To this day, he makes barely a splash as he glides from one end of the pool to the other.

But while Ronnie's vocabulary was adequate, his sentences were short and choppy, and he definitely lacked communication skills. By the time he was three, he exhibited what is called "echolalia" -- in other words, when someone said something to him, instead of answering that person, he would repeat what he or she said. With my mother's instinct screaming that something was wrong, I began dragging my son and husband from doctor, to psychologist, to speech therapist, to audiologist, to pediatric neurologist, to eye doctor.

The gnawing in my stomach would not abate, and I had nowhere to turn.

The only one who found a problem was the eye doctor, who prescribed glasses for Ronnie. Still, nothing changed -- not even his struggle to recognize people, though he had proven to be quite nearsighted. To make matters worse, our pediatrician said to me one day, "The only thing wrong with Ronnie is you. You are much too overbearing and are stifling his growth." I grabbed Ronnie and ran out of his office crying.

Needless to say, we found another pediatrician, but at this point, even my husband and mother refused to believe there was anything amiss. After all, Ronnie had done well in nursery school and seemed to be doing the same in kindergarten. Still, the gnawing in my stomach would not abate, and I had nowhere to turn. I felt alone, guilty and overwhelmed. In fact, I started to think there might be something wrong with me.

But then, at age 6, Ronnie started first grade. Though he learned to read easily, he still lacked social skills, as well as the ability to play appropriately with his peers. Ronnie's teacher referred him to the school psychiatrist, who finally gave him a diagnosis that, although devastating, actually made sense: Ronnie, we learned, had autism, a pervasive disorder characterized by, among other things, impaired social interaction and communication skills, rocking back and forth, and hand flapping.

While today autism is more commonly diagnosed -- according to experts at the National Institute of Neurological Disorders and Stroke, three to six out of every 1,000 children are born with autism, with males four times as likely as females to be afflicted -- back in the 70's, it was practically unheard of. And, truth be told, my husband and I had no idea what to do, where to go or how to help our son. My parents lived two hours away, there was no early intervention and the support system that is available today was non-existent then. Most people, family and friends included, didn't understand autism, nor did they even try. Indeed, as Ronnie became increasingly immersed in his own world, mine felt more and more like it was falling apart.

Eventually, after many years of hand wringing, sleepless nights and contentious meetings with doctors and supposed experts, my husband and I decided to put Ronnie in The Search Day School for Autistic Children. He was 11 years old. Under the guidance of the capable staff, Ronnie began to thrive. With a very small teacher/pupil ratio, he got the attention he needed at school, as well as at home, and together we helped Ronnie strive to reach his full potential.

While Ronnie was growing, so was I.

And while Ronnie was growing, so was I. I discovered Yiddishkeit (Judaism) and grabbed onto it for dear life. I began learning with an insatiable appetite for Torah, which, I am delighted to say, continues to grow stronger, despite having been raised in a totally secular home. Suddenly, I had a different outlook when it came to my son. I wasn't being punished, I realized. I had been chosen -- chosen to nurture a special Neshama (soul) that God had brought into this world.

When my attitude changed, my whole life changed. Instead of looking at my son as a punishment, I began looking at him as a blessing and a test -- a test that I could pass with flying colors. This is not to say that every day is delightful, but, needless to say, we love our children with disabilities and derive as much nachas (pride) from them as we do our other children. Even though that nachas is at times bittersweet and accompanied by a tear or two, I have learned to appreciate Ronnie for the wonderful human being he is, without mourning the human being he could have been.

Today, Ronnie is 38 years old. He grew up to be the finest, most sensitive young man I know. He now attends a workshop with other individuals who have developmental disabilities and gets a great sense of accomplishment from his work. He bowls, swims, skis, reads, learns every week, uses a computer, plays the piano and is more at home in the kitchen than his father. He makes the best rice pilaf I have ever tasted, and he has his own indoor grill on which he can cook just about anything.

Still, he is acutely aware of his limitations and, in many instances, is very resentful. He so desperately wants to be like everyone else, to have a car like his younger brother and to be independent of his parents. There are times when he tells us, "I don't have to listen to you. I am a grown-up." It is very hard to correct him and insist that he do the right thing while preserving his self-esteem and dignity. It is a delicate balance that must be maintained, and I often feel frustrated for both of us. But reaching out to other parents who have children with special needs has helped me. Just knowing you are not alone often gives one the courage to continue to move forward.

And while I am still not free, as are my contemporaries who do not have children with developmental disabilities, to come and go as I please -- my son must always be my first priority -- I do believe I have grown as a person, as has my husband. Indeed, it is said that when you are put to the test, you will either progress or regress, but you cannot stay the same. I have definitely found this to be true. And with God's help, we will continue to grow every single day, one day at a time.

This article originally appeared in the World Jewish Digest.
Like What You Read?  Give Jews around the world the chance to experience engaging Jewish wisdom with more articles and videos on Aish. It would make your mother so proud and as a nonprofit organization it's your support that keeps us going. Thanks a ton!

Judy Gruenfeld is a social worker and has published poetry and articles in several magazines, newspapers and anthologies.

5 Simple Ways to Discipline without Punishment

5 Ways to Teach Kids to Be Responsible for Schoolwork

Flying Solo
Near Death Experience Panel
The Western Wall: The Heart of the World
Ask the Right Question: Tisha B’Av
Comments
MOST POPULAR IN Family
Our privacy policy
Aish.com Is Looking for Great Writers