Kippah: A Blessing On Your Head 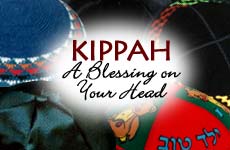 It is perhaps the most instantly identifiable mark of a Jew. When and why do we wear a kippah?

It is perhaps the most instantly identifiable mark of a Jew.

In the Western world, it is customary to remove one's head covering when meeting an important person. In Judaism, putting on a head covering is a sign of respect.

The ness of a Jewish head covering is hinted at in the blessing we say every morning, thanking God for "crowning Israel with splendor" (Talmud – Brachot 60b)

The kippah is a means to draw out one's inner sense of respect for God.

The Talmud says that the purpose of wearing a kippah is to remind us of God, who is the Higher Authority "above us" (Kiddushin 31a). External actions create internal awareness; wearing a symbolic, tangible "something above us" reinforces that idea that God is always watching. The kippah is a means to draw out one's inner sense of respect for God.

It's easy to remember God while at the synagogue or around the Shabbat table. But Jewish consciousness is meant to pervade all aspects of our lives – how we treat others, how we conduct business, and how we look at the world.

Appropriately, the Yiddish word for head covering, "yarmulke," comes from the Aramaic, yira malka, which means "awe of the King."

In Hebrew, the head covering is called "kippah" – literally "dome."

To wear a kippah is to proclaim "I am a proud Jew." There is a fascinating phenomenon whereby non-observant Jews visiting Israel will wear a kippah for the duration of their stay. It may be out of a sense that the entire Land of Israel is holy like a synagogue. Or it may be the removal of any self-consciousness that can often accompany public expression of Jewishness in the diaspora.

A kippah is the sign of a Torah ambassador and reflects on all Jews.

Indeed, wearing a kippah is a big statement, and obligates the wearer to live up to a certain standard of behavior. A person has to think twice before cutting in line at the bank, or berating an incompetent waiter. Wearing a kippah makes one a Torah ambassador and reflects on all Jews. The actions of someone wearing a kippah can create a Kiddush Hashem (sanctification of God's name) or conversely a Chillul Hashem (desecration of His name).

Of course, putting on a kippah does not automatically confer "role model" status. Sometimes we unfortunately hear of a religious person caught in some indiscretion. I recall one time in Los Angeles, noticing that a drunken, disheveled man was walking down the street – wearing a kippah! He wasn't Jewish, but he'd found an old kippah and thought it helped him fit in with the neighborhood atmosphere. For me, it drove home the idea that it's not fair to "judge Judaism" based on someone displaying the outer trappings of observance.

When to Wear a Kippah?

From a biblical standpoint, only the Kohanim serving in the Temple were required to cover their heads (see Exodus 28:4). Yet for many centuries, the obligatory custom has been for Jewish men to wear a kippah all the time, as the Code of Jewish Law says, "It is forbidden to walk four cubits without a head covering."

Does a kippah have to be worn while playing sports? This issue came to the fore recently with the publicity surrounding Tamir Goodman, the basketball sensation who is an observant Jew.

The answer is that it is preferable to wear even a small kippah, pinned to the hair. (Velcro works great!) If it is impossible because of the game conditions or rules, it is okay to play without a kippah.

When bathing or swimming, one does not wear a kippah.

Certainly, a head covering is obligatory while engaged in prayer and Torah study.

What kind of head covering qualifies? Basically anything – including a baseball cap or a scarf tied around one's head. Of course, in the synagogue, it is more respectful to use a regular kippah.

A kippah should be large enough to be seen from all sides.

How large must a kippah be? Rabbi Moshe Feinstein states that the minimum measure is that "which would be called a head covering." Rabbi Ovadiah Yosef says the kippah should be large enough to be seen from all sides.

Additionally, many also wear a hat when they pray to increase awareness of the Almighty as they stand before Him. (Mishne Brura 183:11)

What about instances where wearing a kippah conflicts with business and career interests?

Rabbi Moshe Feinstein writes that in certain cases, there is room to be lenient. For example, a trial lawyer might not be properly serving his client if the jury will be distracted by the kippah. U.S. Senator Joe Lieberman may use a similar line of reasoning.

Of course this can cut both ways. A prominent businssman once told me that for every client "lost" because of his kippah, there were two clients gained, who respected his display of integrity and courage in wearing a kippah.

The story goes that Rabbi Levi Yitzhak of Berditchev once saw a man running. "Where are you running to?" the rabbi asked.

The rabbi retorted: "Perhaps your livelihood is in the other direction – and you're running away from it!"

For many seeking to express their Jewish identity, "to kippah or not to kippah?" – that is the question. Here are two fascinating first-person accounts of how to deal with this issue:

The Meaning of Kaddish

How to Put on a Tallit

Mincha - The Afternoon Prayer
Faith: the Axis Upon Which the Wheel of Science Turns
Love - Not Just About Chemicals Anymore!
Is There a Moral Code in a Virtual World?
Comments