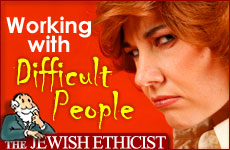 An incompatible co-worker can be an unbearable challenge.

Q. I have a co-worker who is tyrannical and otherwise difficult. Sometimes she accuses me of incompetence. I suffer greatly from having to work together with this person as a team. What can I do?

A. Working together with someone incompatible can be one of life's greatest trials. One prominent Jewish classic finds a hint of this difficulty in a commandment of the Torah.

The Torah commands us, "Don't plow with an ox and an ass together" (Deuteronomy 22:10). While this directive may seem arbitrary to us, the medieval classic work Sefer HaChinukh suggests an ethical motivation and presents a human analog as well:

Among the reasons for this commandment is concern for the suffering of animals, which is a Torah commandment. For it is known that to animals and birds there is great anxiety to dwell with other kinds, and so much the more to labor with them... And very wise person should learn a moral from this and never appoint for anything two people who are far apart in their natures and different in their conduct, for example a righteous and a wicked person, or a light hearted and a grave person. For if the Torah was strict on the suffering of animals who aren't given understanding, so much the more for people, who have an intelligent soul to know their Creator. (1)

The Talmud points out that it is impossible to endure marriage with a completely incompatible person, "A person can not live in the same basket as a snake" (2); in other places we learn that finding a compatible workplace is a difficult task, comparable in some ways to finding a compatible spouse.

It is surprising how many people suffer difficult situations in silence and don't make an effort to rectify them.

Even so, it is surprising how many people suffer difficult situations in silence and don't make an effort to rectify them. If you haven't done so until now, try to find a way to communicate your concerns to your colleague -- preferably directly, but if necessary through a third party. The Torah commands us, "Surely reprove your fellow, and don't bear sin towards him" (Leviticus 19:17).

Let's see what the same Sefer HaChinukh says about this:

Because this promotes peace and welfare among people, for if one person should sin towards another and he reproves him privately, he can apologize before him and the other will accept his apology, and be reconciled. But if he doesn't reprove him, he will despise him in his heart and be liable to harm him sooner or later.

A parallel consideration mentioned by other commentators is that if we reprove someone, we give them an opportunity to defend their actions. Sometimes it is the reprover who owes an apology, but no matter what it is the gentle and private reproof that creates the opportunity for reconciliation.

If private steps don't solve the problem, you may have to turn to other people in your firm. While informing your boss about this person's shortcomings for purely vindictive purposes would be forbidden slander, your intention is not to get revenge but merely to create a livable working environment. I would certainly advise you to consult your employer and try to find a way to change your work situation, even if the outcome may be that your co-worker may have to change jobs. If that doesn't help matters, it may be that you should begin patiently looking for a new situation.

The Jewish Ethicist When Can I Hold On To Assets
Would You Rather Be Right or Happy?
Korach’s Unique Punishment
Who Was Josephus? The Controversial Backstory of the Famed Historian
Comments
MOST POPULAR IN Current Issues
Our privacy policy