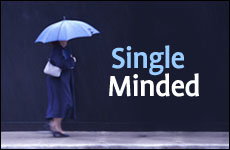 Why aren't we all matchmakers?

Almost 20 years to the day that I stood beneath a flower-decorated chuppah on Eastern Long Island, I left my marriage and home with a toothbrush and a "Shabbos blouse" hastily stuffed into my oversized pocketbook. I wore a one-size-fits-all black skirt and pretty lavender sweater, covering an "I love Jerusalem" T-shirt. At the time I left, I didn't realize that it would be another 14 months before I could afford to replace the skirt or that I'd be spending most of the next few weeks sitting in an empty, cold-water flat wearing the absent-owner's terry-cloth bathrobe in order not to soil my one outfit. With no immediate source of income and the Passover holiday looming, I found work cleaning houses for the upcoming holiday in the city's Rehavia neighborhood: two homes for $100 apiece.

We were invited out for the first night to the home of my friend's parents. These people didn't know us but treated my brood and me with dignity and visible delight. The gracious, elderly hosts ignored my discomfort over my "turn of circumstances" and, instead, we were made to feel as though this was the only place in the world for a frightened, divorcing mother and her six confused children.

The following year found us happily (!) ensconced in my bachelorette pad and we, the warring parties, had a "holiday agreement" ironed out. Finding myself childfree for the holiday, I attended a fabulously A-List Seder, gourmet catered at a five-star hotel. I lucked upon this invite via loving New York friends. Again, I was treated with dignity but on a personal level, I felt uncomfortable. Newly single, it was hard not to feel peculiar in a couple's world. After all, for 20 years I had played hostess, basking in the admiration of friends and family.

The reason I didn't think of singles was because I didn't, in fact, see them. It was easier to save my compassion for the more visibly needy among us.

My third, fourth, and fifth "alone" Passovers have been spent with the Kaplans. Last year, trudging up the steep hill to their beautiful home, I suddenly began crying uncontrollably, hugging the gift bag of wine and macaroons to my chest. In addition to feeling sorry for myself, I was overtaken with an indescribable feeling of guilt. In all of my 20 years of marriage, I had never given an ounce of thought to single people. Never took a Donna Reed moment -- in-between poring over recipe books, selecting festive fabric napkins, and finding poignant, Torah-inspired works to better enhance our reading of the Haggadah -- to wonder where the single woman in the fourth row (right side) of the women's section is at the moment my youngest child recites the four questions. Where the quiet man, childless and widowed, renting my neighbor's basement apartment, is eating his Shabbos supper.

This sense of overwhelming shame was compounded by an even harsher truth: the reason I didn't think of them was because I didn't, in fact, see them. In my marital struggle for conformity, it was easier to put on blinders and save my compassion for the more visibly needy among us: the poor, the physically disabled, the displaced.

But now I could feel the isolation of another human being. Because on some days I was so lonely that I thought my heart would break upon seeing an elderly couple sitting together on a park bench or a young man waiting, with a baby in a stroller, beaming as his pregnant young wife exited the pharmacy.

When I was married, I'd occasionally come across a single man or woman who I knew was good for somebody. Somebody I'd already met. Somebody who was recently divorced. Available. Whatever. But I could never remember just who that somebody was, because I hadn't written it down. I'd say to the respective person, "Oh, when I remember, I have to make this shidduch!" And even though it mattered to me that I be thought a considerate person, it hadn't mattered enough for me to truly take in that the person to whom I was speaking was desperate for a date, a chance, the opportunity to become an "us."

Among the holiest of our people are those who try to make matches between men and women. And just as there are disreputable people in many fields, I'm fairly certain that the shidduch industry has its own roster of charlatans. All the same, I'm awed by the professionalism and compassion among the many I've met.

Professionals aside, it behooves me to ask, why aren't we all matchmakers? Why isn't each and every one of us keeping a little memo pad in our back pockets or pocketbooks in order to catalog a roster of the singles we meet? Why aren't we pulling out that same notebook/palm pilot/business card folio and comparing our lists with the other men/women at the gym/book club/nail salon?

I have begun to do just that: to want and pray for another that which I want and pray for myself. Without a trace of the old shyness, I now ask, aloud, "does anyone know of a man who might be suitable for this woman?" It is my fervent hope that at another table, elsewhere, someone is asking the same question on my behalf.

Walking up that hill last Pesach I made a promise, one that I'm determined to fulfill. Should I be blessed by God to merit another marriage, I will make it my business to remember this time, to truly hold onto this aching loneliness in order to include singles in my world. To never, again, grow smug in my own life-station.

Keeping an Open Mind while Dating

Secrets of Successful Dating for Marriage

Stop Being So Picky!

8 Signs You Might Not Be Ready to Get Married
Big OnThe Little Things
Chraime Egg Boil
Is Grease the Word?
Comments