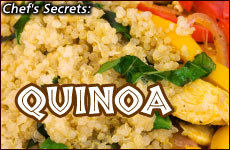 Quinoa was a staple food for the Incas. It remains an important food in South American homes. It's a supergrain, high in protein and unsaturated fats. It is a valuable source of nutrients and is relatively low in carbohydrates. Quinoa cooks like rice. It can be used as part of a main dish, in soups, salads and even as a dessert.


Combine first 4 ingredients in a heavy large saucepan. Bring to a boil over medium-high heat. Reduce heat to medium-low, cover, and simmer until water is absorbed and quinoa is tender, about 20 minutes.

Meanwhile, whisk oil and next 4 ingredients in small bowl to blend. Season dressing to taste with salt and pepper.

QUINOA WITH CORN, SCALLIONS, AND MINT

Whisk together lemon juice, butter, honey, slat and pepper in a large bowl until combined.

Wash quinoa in 3 changes of cold water in a bowl, draining in a large sieve each time.

Cook quinoa in a 4- to 5-quart pot of boiling salted water, uncovered, until almost tender, about 10 minutes. Drain in sieve, then set sieve over same pot with 1 inch of simmering water. Cover quinoa with a folded kitchen towel, then cover sieve with a lid and steam until quinoa is tender, fluffy, and dry, about 5 minutes. Remove from heat and let stand 5 minutes.

Add quinoa to dressing and toss until dressing is absorbed, then stir in corn, scallions, mint, and salt and pepper to taste.

Wash quinoa in several changes of cold water in a bowl, rubbing grains between your palms, then drain well. Bring quinoa and 6 cups of water to a boil in a large sauce pan, then reduce heat and simmer, uncovered, until grains are translucent, 13 to 15 minutes. Drain well in a sieve.

Stir together cinnamon and remaining tablespoon sugar and sprinkle over top of pudding. Bake in middle of oven until a knife inserted in center comes out clean, about 40 minutes. Serve warm or at room temperature.

In a bowl wash quinoa in at least 5 changes cold water, rubbing grains and letting them settle before pouring off most of water, until water runs clear and drain in a large fine sieve.

In a saucepan of salted boiling water cook quinoa 10 minutes. Drain quinoa in sieve and rinse under cold water. Set sieve over a saucepan of boiling water (quinoa should not touch water) and steam quinoa, covered with a kitchen towel and lid, until fluffy and dry, about 10 minutes (check water level in kettle occasionally, adding water if necessary)

While quinoa is cooking, in a small bowl toss beans with vinegar and salt and pepper to taste.

In a small bowl whisk together lemon juice, salt, cumin and add oil in a stream, whisking.

Drizzle dressing over salad and toss well with salt and pepper to tastes. Salad may be made 1 day ahead and chilled, covered. Bring salad to room temperature before serving.

How to Make Chocolate Babka
Should I Break Up, Get Engaged or Keep Dating?
Time Is Your Precious Commodity
A Constant World in Flux
Comments
MOST POPULAR IN Family
Our privacy policy