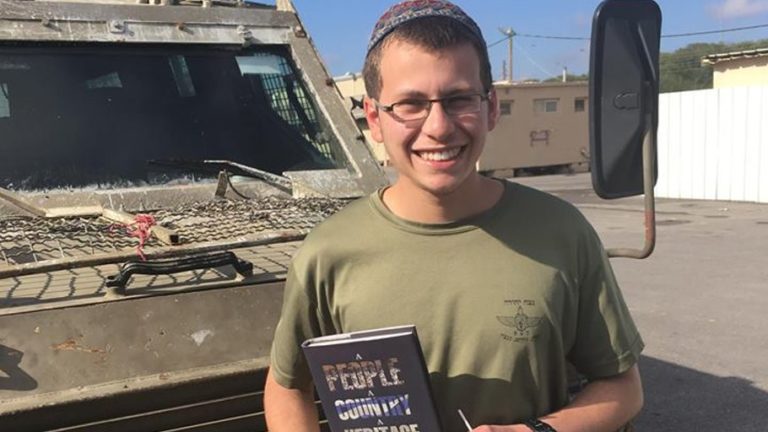 Nathaniel Felber was seriously wounded in a deadly terror attack which claimed the lives of two other soldiers.

While serving in Nahal Haredi, the IDF’s religious battalion, Nathaniel Felber, 21, sustained a gunshot wound to his head when an Arab terrorist opened fired at close range as he guarded the Givat Assaf interchange north of Jerusalem on December 13. The terrorist killed two other soldiers, Mor Ben-Yosef and Yossi Cohen. Nathaniel was rushed to the Hadassah Ein Kerem hospital where complicated neurosurgery succeeded in saving his life and stabilizing his condition. He was sedated, put on a respirator, and continues to defy the odds.

Although he has not yet regained consciousness, the Felber family is staying strong, hopeful for his recovery; they have seen small signs of improvement. A few weeks ago, he regained the ability to breathe by himself for short periods on his own, at times opening an eye. On one occasion he squeezed his sister’s hand and on another moved his arm when his father was putting tefillin on him. Since the attack the family has maintained an almost constant presence at his bedside. 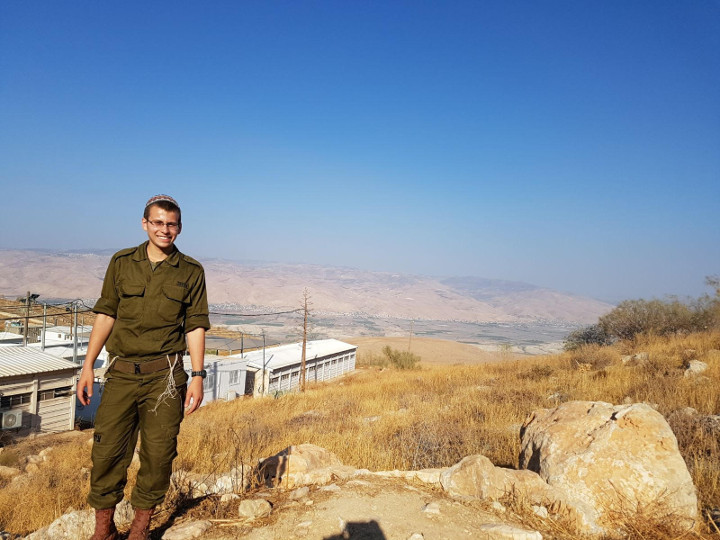 Nathaniel at his army base

Judi and Joe Felber along with their three children, Adina, Daniel and Nathaniel moved to Israel from Silver Spring, Maryland in 2006. Nathaniel, the youngest, was 9 at the time. “He has always been an easy-going person,” Judi said in an Aish.com interview. “He made friends quickly and easily, and threw himself into a new language. By the time he finished high school and enrolled in pre-military academy, the boys he met didn't know that Hebrew wasn't his first language.”

Nathanial has a long road ahead and the family prays that he will recover from his serious injuries.

Every picture of Nathaniel shows that same enchanting smile. “It comes from a pure love and joy of life,” Judi said. “He rarely argues, always tries to see the good and has the ability to make any situation fun and enjoyable. He’s always careful not to make others feel bad.” 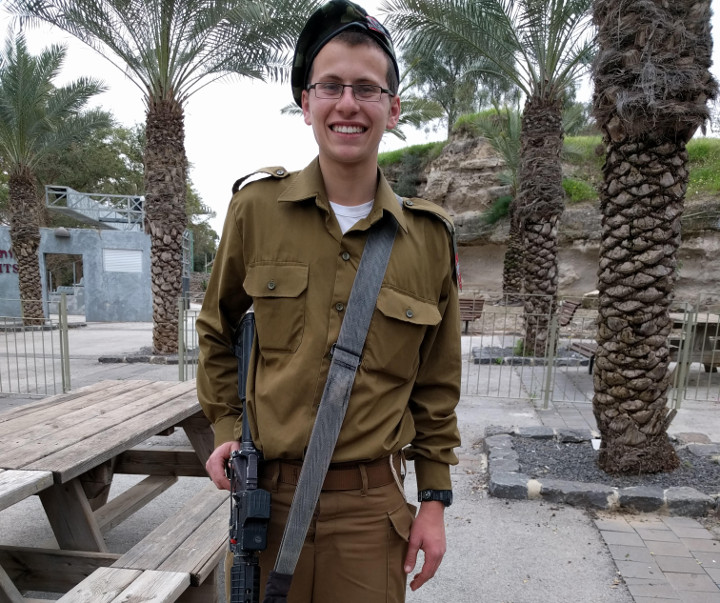 “Volunteering is a big part of who he is,” his mother said, recalling a typical story from his teenage years when he and three friends, all members of the youth movement Bnei Akiva, were asked to go to a local nursing home to help make a minyan.

“It seems that there were never enough men. So the boys started going, and they kept on going, every Shabbat morning for four years.” Eventually more men started to come on a regular basis until an established service took shape. When the boys graduated high school, the nursing home residents made a kiddush (reception) for them and invited their parents. “I witnessed the most amazing scene,” Judi recalled. “The boys and the residents were friends. Age had nothing to do with it. They treated each other as equals. It was beautiful to see.”

Love of Judaism and learning Torah

Nathaniel opted for a religious battalion of the IDF where soldiers have time allocated for prayer and study, with the support of rabbis to help them maintain a religious lifestyle throughout their service.

“He was constantly learning. He always had books with him,” said Rabbi Josh Gerstein, who works for Netzach Yehuda, a non-profit organization that provides learning options and support for the soldiers of the Nahal Haredi battalion. 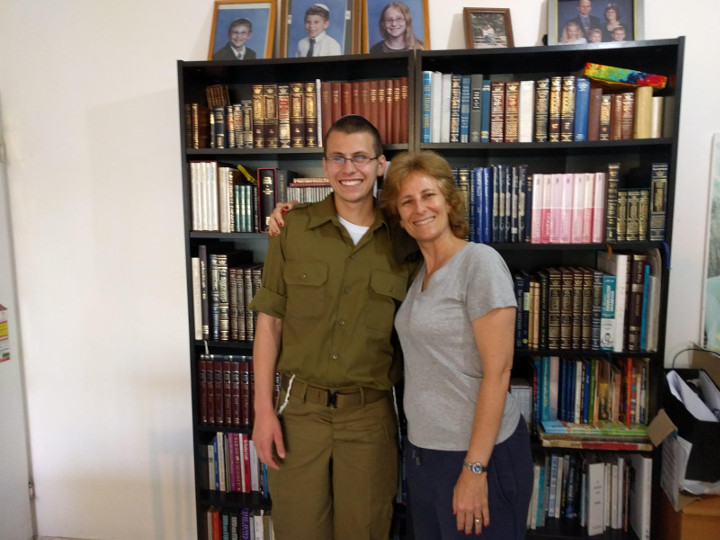 Nathaniel with his mother Judi

Study sessions were usually arranged during soldiers' breaks from guarding; but Nathaniel took advantage of other opportunities to learn and would invite Rabbi Gerstein to learn with him in the radio room when he would serve a 12-hour shift.

“There were often gaps of a few minutes to much longer between having to man the communications,” Gerstein said. “It’s easy enough to fritter away this downtime, especially when you are faced with 3 minutes to spare, then another 2, then another 5, but Nathaniel would take every opportunity to make each minute meaningful.”

“It’s very understandable when you come back from a six or seven hour jeep patrol to say, ‘I have other things to do, I’ll learn later,’ but Nathaniel would take out a book and learn. His time was not his own. Seeing Nathaniel optimize his time made me realize that we all can find time to learn.”

This desire to maximize his time is something his family also saw on his visits home from the base. “He was either reading a Torah book or listening to a lecture,” his mother recalled. ”He and his friends would get together to learn over pizza or hamburgers. It was clear that he wanted to pursue his yeshiva studies. After Shabbat, when he had been home from the army, he would go to his yeshiva to learn with the boys who were there.”

The last time we learned

The last time Rabbi Gerstein met Nathaniel to learn was just after Hannukah, only days before the attack. “We were connecting the messages of Hanukkah to his service in the army,” he said. “We learned that just as the miracle of the oil happened inside the Temple, and the militarily battle took place outside the temple, today in Israel we still need both, military strength and the strength of Torah. Nathaniel resonated with this. He defined himself as a yeshiva student serving in the army, bringing these two words together.” 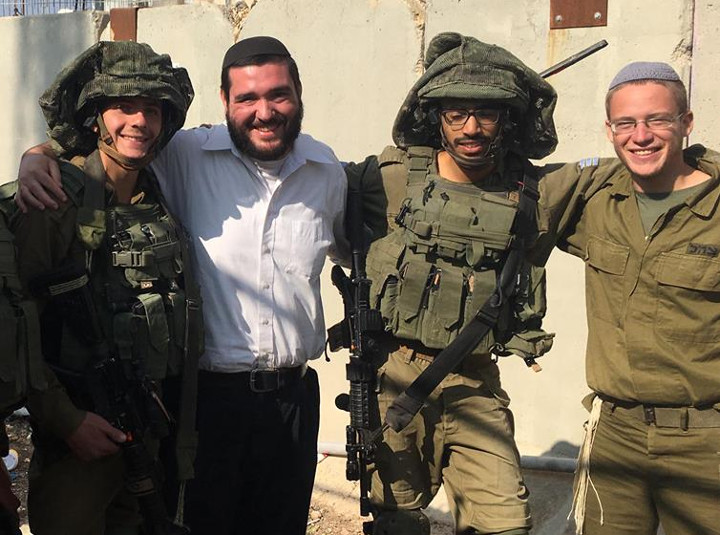 Rabbi Gerstein was one of the last people to speak to Nathaniel before the attack, having made arrangements to meet the soldiers at 9.30 at their guarding position to deliver some candies ahead of Shabbat. But he got two flat tires on the way. He called to let him know and heard about the attack on the way to the base. “One thing I’ve taken away from this is that in life, you have to focus and find the important things in life. We get our heads down with so many things without realizing what we have.”

Since the attack, the Felbers have relocated from their family home in Ranana to Jerusalem, taking up residence in two hotel rooms adjacent to the hospital, enabling them to spend as much time as they can with Nathaniel.

“Our community has been amazing. They visit us, bring us all of our meals, and basically coordinate our lives,” Judi said. 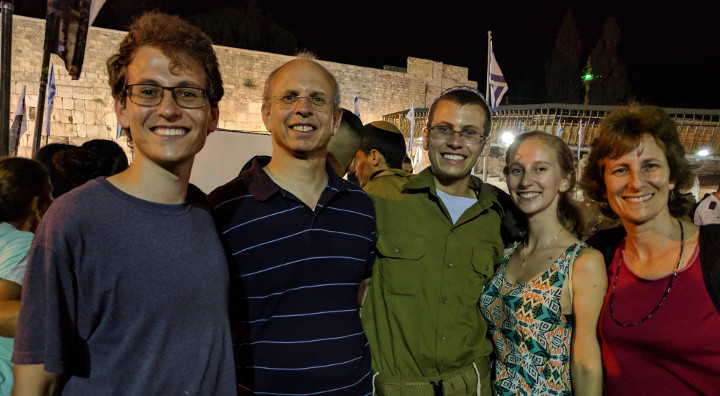 Nathaniel with his parents and siblings

When the community wanted to coordinate the family’s laundry, someone found a local laundromat nearby. When the owner found out it was for the family of a wounded soldier, he said that he would do it for free.

“Lots of his friends have come; they have given us much strength and encouragement. We are getting to know aspects of Nathaniel that we never knew before.”

Praying for a full recovery

Since the attack, prayer services have been said at the families behest in communities throughout the world including at the Western Wall in Jerusalem last month, where Joe Felber thanked those who were praying for his son and asked them to continue. “Nathaniel always prayed for all of the Jewish people,” he said. “Now we can repay the favor.”

Please pray and perform good deeds for Netanel Ilan ben Shaina Tzipora to have a speedy and full recovery.

The Heroes Among Us

Israeli Courage
It Takes A Lot Of Faith To Be An Atheist
How Instagram Brought Back This Nostalgic Soup
What Makes Eli Run?
Comments
MOST POPULAR IN Israel
Our privacy policy