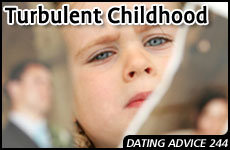 Does having dysfunctional parents mean he'll become that type of adult?

I'm in my early 20s and live at home with my parents. I have dated a number of young men, but didn't feel any of them were right for me. Recently, I met a young man who is a few years older than me. His parents are divorced and he lives with a very fine family who are relatives of his.

This is the first guy that I actually like and am attracted to. I feel so comfortable talking to him, and it seems like all our values for life and family match up really well.

Unfortunately, after a few weeks, my parents found out things about his parents' divorce that caused them great concern. The three children in the family went to live with their relatives when they were teenagers because their parents had a volatile and violent relationship.

When my parents heard this, they immediately said that they do not want me to continue to date him. They explained that a person's family and roots are extremely important, and that if he experienced such a traumatic situation, he will have a much harder time building and maintaining a happy and stable marriage. They say that patterns repeat themselves, and that if I were to ever marry him he could end up abusing me and my children. They think that if I were to marry this guy, it would be a huge risk and I would really be "settling."

However, I truly feel that this guy is one of a kind. He is very close to his rabbi, and I think it is good that he has such a mentor. I also feel that even though his background wasn't a healthy one, he has put himself in really good surroundings and is positively influenced by his relatives.

My parents though, don't even want to hear of it, and that has gotten us into a huge disagreement. They say they will not support me if I decide to continue seeing this guy. I don't want to go behind their backs, but I really don't know what to do.

Let's first discuss you parents' worries about your courtship. It is valid that they are concerned about anyone who may come into their family. For that reason we think it is wise to find out important details about potential dating partners as early as possible, for example:

Now regarding your specific case:

Many men and women who grew up in tumultuous homes with little marital harmony can be wonderful marriage partners and parents. However, because human beings tend to learn behaviors from what they observed and experienced when they were growing up, a person who was raised in a difficult family situation is at risk for modeling his own behavior after that of his parents. This may not necessarily manifest at the beginning of a marriage, but possibly years later. For example, a man whose father abandoned the family may vow never to do the same to his own wife and children, but he still may unconsciously emulate this behavior years down the road, when a job loss or mid-life crisis triggers unresolved emotions from his childhood. We are not going to discuss the different theories about why this happens, but we have seen that it does happen -- and there seems no way to predict which adults will react this way and which will not.

That doesn't mean that someone from a difficult family situation can never overcome this challenge. As we've said, a good many are able to do so very well. But it doesn't happen with the snap of a finger or just because someone wills it to. Once again, there is no way to tell whether someone from a troubled family will encounter difficulties because of unresolved issues. However, we have seen many such individuals succeed in their marriages because they have worked with a competent mental health professional to resolve the issues that arose from their upbringing.

These issues can include feelings of abandonment, betrayal, neglect, anger toward a parent, depression, witnessing verbal or physical abuse of a parent or sibling, being the victim of such abuse, or sexual abuse in the family. An individual can unconsciously suppress thoughts and emotions related to these experiences and not know how to deal with them if they eventually surface.

Even someone who is aware of his feelings about his difficult childhood and has developed coping mechanisms to help deal with them, may encounter problems if at some point in time the coping mechanism breaks down and leads to a personal crisis. Professional therapists have been specially trained to help clients become aware of their thoughts and emotions, understand them, resolve them, and gain closure. (A self-help book or an individual without clinical training, such as a counselor or rabbi, cannot provide the necessary guidance.) This is the best way an individual can keep from modeling undesirable behaviors he observed while growing up.

In our professional opinions, someone who grew up in a tumultuous or difficult family situation should work to resolve these issues with a help of a therapist, before he or she marries. We would make this recommendation even for people who seem to be "fine" at this point in their lives, so that they have the proper emotional tools to build and sustain a strong and healthy marriage from the very start. (Therapy can also be helpful after marriage, but the optimal time is beforehand.)

Now let's get back to your parents' objections to your dating this young man. We would suggest that instead of dismissing him outright, you ask more questions. Once you and you parents have more information, you will be in a better position to decide whether to continue dating him. You should try to find out:

These questions sound very intrusive, but they have to be asked, since the answers are critical in determining whether or not to build a future with him.

You may decide that the wisest decision will be to stop going out with this young man. We know how hard that decision will be, and it will take you some time to get over the break-up and move forward, However, the fact that you met someone you could admire and connect to, even though he wasn't right for other reasons, can give you encouragement that the right man is out there.

On the other hand, you may find that this man has worked very hard to resolve the issues of his childhood. The fact that he has a mentor (his rabbi) for whom he has high regard, is a positive sign of someone understands that there are people who are wiser than him, and that he has someone to turn to with questions.

This guy could turn out to be a real gem who will be a terrific husband and father. And that's something even your parents can feel good about.

Dating Advice #5 - What You See Is What You Get

Dating Maze #230 - 8 Rules for the Next Date
The Promise Of The Land
Which Chat Are You On?: Parshas Behar/Lag Ba’Omer
Do You Like Slow-Cooked Food? Thank the Jews
Comments
MOST POPULAR IN Dating Advice
Our privacy policy