My Journal during The Six Day War 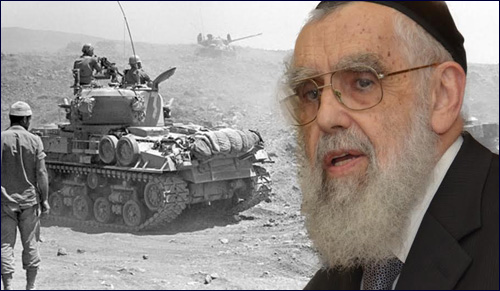 The dramatic journal of an American family in Israel during the Six Day War.

Rabbi Emanuel Feldman was living in Israel with his young family during The Six Day War while on sabbatical from his rabbinic duties at Beth Jacob Synagogue in Atlanta, GA. While in Israel he was a visiting professor at Bar Ilan University. This excerpt is taken from his journal of the Six Day War, The 28th of Iyar (Feldheim), which was originally released in 1968 and has been re-printed in commemoration of the upcoming 50th anniversary of the Six Day War.

This entry describes the breakout of the war.

Sheinfeld was partly right about those Arab pilots. From 11 P.M. to 4 A.M. there are no alerts. But at four, just at daybreak, we are shaken from a deep sleep by that terrifying scream. I groan, and run in to wake the boys, but they are already dressed and cheerfully getting ready to go down to the shelter.

The shelter is filled with the same people, but everyone is in fine mood today, animated, friendly, alive. Israelis by nature are very reserved, almost aloof, but some of our neighbors – even the ladies – who scarcely nodded to us for the past ten months are suddenly friendly.

The news on the radio now is incredible: Israel is claiming the destruction of 375 Arab planes. 375! Incredible, astounding, unbelievable. It cannot be. Undoubtedly this is just an exaggerated war claim. And yet the Israeli Army is not known to make idle claims. 375 planes? Is it possible?

Jerusalem is still being heavily shelled and our troops have invaded the Old City. Good. There is news that we have captured Latrun and Nabi Samuel and are moving to surround the Old City. And El Arish in the Sinai has been captured and we are moving on Aza. So things are not going badly.

Estelle wonders what we will do for food today. We are out of milk, there is just a little bread, and the stores will undoubtedly not be open. As for the milkman, we are lucky if he shows up in normal times. But we will manage.

All is quiet. We hear no sound of anti-aircraft guns, no explosions. The all-clear sounds at five A.M. and the men decide to go to Itchkovitch for Shacharis (morning services). There is already a large crowd there, overflowing into the street, and everyone is whispering excitedly about the 375 planes. The prevailing opinion is that we have won some important air battles, but that the Air Force has stretched the truth this time in its claims. I pick up BBC on my radio and the announcer is saying, “There are conflicting claims on both sides. Israel claims to have destroyed over 300 Arab planes, while the Arabs are claiming that they have shot down over 200 Israeli aircraft.”

An interesting occurrence during Shacharis: we are davening out on the sidewalk in typical Itchkovitch fashion, and the Kohanim are about to begin their Priestly Blessing. At that moment the air-raid alert sounds again. We all look at one another, no one moves, and without a word or a motion we agree intuitively that we will continue davening and not run to a shelter in the middle of prayer. And so, as the siren continues to wail, the Kohanim take their customary position up front, raise their prayer shawls over their heads, cover their faces, stretch forth their arms, the chazan intones, “Kohanim,” and, as if in musical harmony with the alarm, they recite Birkat Kohanim, “Yevarechecha – May God bless you and keep you. May God turn His countenance upon you and be gracious unto you. May God turn His face unto you and give you – ” and just as they are about to utter the last word of the blessing – “Shalom, peace” – the all-clear sounds and they chant Shalom in counterpoint to the siren.

It is just before 6 A.M. We are back in the shelter waiting for the next all-clear when we hear the clip-clop of a horse and the clinking of glass. We dash out of the shelter and there, resplendent with his white bottles, is our milkman.

Our milkman: how we used to curse him silently every morning, him and his creaking wagon and neighing horse and noisy bottles. How could he be so coarse, so insensitive, so oblivious to the fact that it was still nighttime and we were asleep? And how we used to resent the fact that the bottoms of the bottles were always encrusted with mud and sand. Milkman, all is forgiven: we surround him and chatter gaily and the children jump up and down and embrace him and climb up on his dreary, gray horse.

It occurs to me suddenly that our family in the U.S. must be frantic, and I go over to the Post Office to send a telegram. There is a long line in front of the telegraph clerk. He seems to be discussing the wording of every telegram presented to him. Perhaps there is an emergency limit on the amount of words, or maybe a special censorship has been imposed. As I get closer to him I can hear what he is doing.

“What?” he says. “You are telling them that there is still some danger? Change that. We are not in danger.”

“Oy,” he says to the next man. “Why do you have to mention about the shelling? The shelling was nothing. You should have seen Europe. Just take that part out.”

“Ah,” he beams at a lady’s text, “this is the kind of telegram to send. Everybody listen. This is a model. ENEMY IS DEFEATED. ALL ARE WELL. GOD HAS REVEALED HIMSELF TO ISRAEL. DO NOT WORRY. That’s what a telegram should be: encouraging, happy. We have to show the outside world that we are the victors.”

So it goes. He edits and deletes and rewrites and censors – a word here, a phrase there. If the outside world this morning is receiving unusually ecstatic messages from a country at war, they have this clerk to thank.

Feldheim Publishers is proud to reissue Rabbi Emanuel Feldman’s bestselling firsthand account of life on the Israeli home front before and during the war.

Rabbi Feldman was on a sabbatical in Israel with his family in the time before and during the Six Day War. His decision to keep a daily account of the tense weeks before the war and during the war itself led to a dramatic, day-by-day journal telling the story of an American family and an entire nation who lived through the frantic and historical days of June 1967. Click here to order.