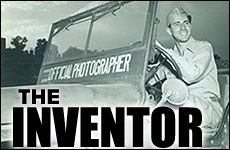 If necessity is the Mother of invention, Ben Kleinerman is its father.

With several of his inventions on display in the Smithsonian Institute, 67 patents to his name, and over 100 inventions, Ben Kleinerman, 91, radiates electrifying enthusiasm for improving the lives of others through his creative brainstorms -- from the quirky to the essential.

If there is one thing Ben Kleinerman is proud of, it's his role in Israel's victory in the 1967 Six-Day War. 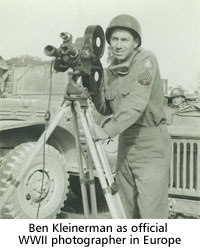 He was the principal engineer and Program Manager of the KA-56 camera at Fairchild Camera Corp. at the time, and they had just developed a brand new technology. In the underbelly of a fighter plane, this special panoramic camera was equipped with their novel infrared-enabled Poromat film. An ingenious device, the advantage of this camera and its film was that fighter jets could do surveillance and reconnaissance missions, capturing images of the territory beneath them, instantly develop those pictures while still in the air, and then turn around and strike with amazing accuracy. Prior to the KA56, the reconnaissance plane had to first land and then develop the film, giving the enemy time to re-order the airfield, replacing decoys in the positions of the real metal planes.

The Egyptian air force was readying itself for battle, with some planes and hundreds of decoys made out of paper mache and wood stretched out on the tarmac. Israeli jets flew stealthily above, snapping infrared-sensitive pictures with their newly outfitted cameras, and within minutes correctly bombing with the short supply of bombs that they had.

The successful air strike crippled the Egyptian army and was a decisive factor in Israel's miraculous victory. Five days later, the war was over.

"After the war, General Hod came to the United States, to our offices, to personally thank us later on," Ben reminisces, "But I was already in Texas, working on the Mars Orbiter and Voyager, so I wasn't there to get his thanks in person."

Ben invented the forerunner of today's electric toothbrush -- only critics said it was the most ridiculous and useless thing they'd ever seen! If you remember the inconvenient days of single-use flashbulbs, you can thank Ben Kleinerman for putting you out of your photographic misery. He produced the first rechargeable flashbulb, the technology as used today.

Ben also invented a precursor for today's mega-million success story, Skype; Telescan is a conventional telephone with a screen that allows you to watch your buddy shmooze with you. But again, the idea was shot down as rubbish by everyone except perhaps some fire and police departments and a few banks, who thought they might rustle up a small use for it.

"One day I got a letter from the Smithsonian Institute. They said they wanted me to send them some of my prototypes to display and they sent me some empty boxes to pack them into. We packed up some of my inventions, drove down, and the people at the Smithsonian were very nice and hospitable."

His works are still there. There's the TransiTape, the world's first fully portable, battery operated, all-transistor, 2-speed tape recorder. TransiTape was selected as one of the greatest inventions of the past 50 years and was exhibited at the Cooper-Hewitt Museum in NYC, sharing the spotlight with period greats such as the Washing Machine, Wonder Bread, and FDR, honored for Social Security.

The Cinesone is another classic, taking the technology of home-movie reels to new heights by giving it a voice. Before the Cinesone emerged on the scene, silent movies were the order of the day. Now, voice could accompany the moving picture, a radical and welcome upgrade. The Cinesone's debut model was Ben's oldest daughter, Kay, whose first birthday party is eternally preserved and on view at the Smithsonian Institute for visitors to marvel at -- a 400-foot, 16 mm tape reel filled with ten minutes of birthday scenery, Mankind's first ever audio-visual home presentation!

In 1964, he created an EKG machine so lightweight and portable that it was the size of a king pack of cigarettes, effectively replacing the bulky machines carried by doctors who made home visits, as was the style of the day.

The Cardio-Sensor didn't give a printable readout; instead, it was a cardiograph which allowed doctors to interpret a patient's PQRST heartbeat curve to quickly diagnose a problem. When the Cardio-Sensor device hit the market, the Cities of New York and Atlanta immediately purchased hundreds. In the shadow of the Cold War, city officials, worried about a Russian nuclear attack, wanted to be prepared for the grisly prospect of doctors arriving on the scene of catastrophe, urgently needing to differentiate between victims who were still alive and those who had already died.

WITH GENERALS CLARK AND EISENHOWER 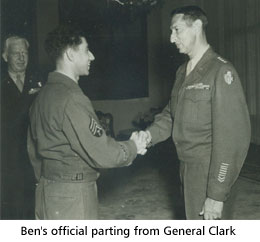 Eastman Kodak worked with him to develop a patent that would make magnetic soundtracks unalterable, thereby preventing nefarious re-recordings. "While John F. Kennedy was in office, we took a speech of his, recorded it as magnetic sound on 16mm film. Kennedy had said, 'We will never bomb and attack Cuba.' The way the magnetic soundtrack works, it was very easy for someone to change his words to say, 'We will bomb and attack Cuba.' The apparatus detected the erased word 'never. We showed the world what could happen."

Next time you watch the Weather Channel, you'll see another Ben Kleinerman original, "The Green Screen," built by Federal Manufacturing and Engineering for CBS as a background projection system.

Ben also worked for years in the thrust and tailwind of World War II as personal field photographer of Generals Clark and Eisenhower, following them around Italy and Austria and capturing the minutiae of their lives. He rubbed shoulders with the rich and famous in his capacity as army photographer, an insider at all diplomatic events.

"I worked with Eisenhower. We went to see Hitler's Eagle's Nest in Austria."

"I was assigned to General Clark for almost four years and I was with him every day of the week. And while Clark was away, I worked with Eisenhower. We went to see Hitler's Eagle's Nest in Austria." 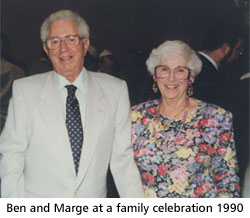 While courting his wife, Ben brought her to the Pentagon to see his handiwork; she was duly impressed. They were shown thousands of official photos take by Ben. In the circular room there was a selection of larger photos. Along with Joe Rosenthal's famous photo of the flag raising at Iwo Jima, there was Ben's photo of Hitler's Coffee Table at the Eagle's Nest being signed by General Eisenhower and seven other generals.

ALL IN THE FAMILY

Life hasn't been easy for Ben Kleinerman. In 1981, he was stricken with Guillain Barre disease, similar in nature to polio. While many victims die from the illness, Ben's lungs were not affected but he experienced total paralysis and could only move his eyelid. For seven months, he didn't move and he communicated with his family through his left eyelid. But he never complained. 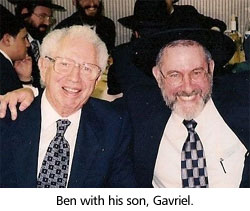 Ben's son, Gavriel (Gil) built a piezo-electric device – a pressure-sensitive pointer that enabled Ben to signal once his left thumb began functioning -- which the hospital permitted for Ben's use. (Ben's dependence on oxygen meant no spark-producing devices allowed.)

Ben made a substantial recovery and hasn't looked back since his illness. His prolific patents, though nurtured with plenty of love and effort, pale in comparison to his true love -- his three children, Kay, Gavriel, and Janie, and his wife of 63 years, Margery, who shares his passion for inventions.

"I've always tried to get my wife involved in my inventing -- so many things are her ideas. She gives me a lot of inspiration."

Ben feels he has truly made his mark on the world and takes great pleasure in his work, especially in the inexplicable brilliance of Divine Providence that can only be detected many years later. Case in point: Ben's son Gavriel, Executive Vice President of Aish HaTorah, Jerusalem, sits in an office that overlooks the Western Wall that was liberated in 1967 with the help of his father's technology.

What Does It Mean to be a Chosen People?

What is the Holiest Spot in the World for the Jewish People?

The Mutation of Antisemitism
The Power Of Prayer
Va’etchanan 5782: A for Effort
Can You Show Me This "God?"
Comments
MOST POPULAR IN Israel
Our privacy policy
Aish.com Is Looking for Great Writers