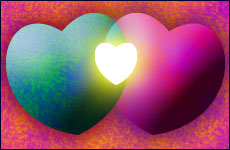 True love requires accepting someone for who they are, without projecting our dreams and fantasies upon them.

A relationship of dominance does not express love. Judaism teaches that love is making a space within yourself for another and giving of yourself to that other. Only when two people give to each other and help each other within a relationship of mutual respect and inclusiveness can they experience the power and miracle of true love.

So how does all this fit with the well known verse in the Torah stating that "He will rule over you" (Genesis 3:16). Is this not the very source and justification for man's dominance over woman? The answer is, "No, on the contrary." The Torah is telling us that this is a curse, not the norm, and not the ideal to strive for. We are responsible to nullify this curse, just as modern technology in agriculture is nullifying the curse of "cursed is the ground for your sake... thorns and thistles shall it bring forth to you... by the sweat of your brow shall you eat bread."

We see how the curse of male dominance was nullified in the loving relationships of all the Jewish Patriarchs and Matriarchs.

God tells Abraham: "All that Sarah has said to you, hearken to her voice" (Genesis 21:12). The Oral tradition teaches that this verse indicates that Sarah's prophetic sense was stronger than Abraham's. Rebecca too, could hardly be described as subordinate to her husband Isaac. It was Rebecca who courageously coaxed her son Jacob into disguising himself as his manipulative brother Esau and coming before blind Isaac to get the blessing. Rebecca had the insight to know that it was truly Jacob who deserved the blessings, and she needed to orchestrate this play in order to help Isaac realize the sad truth regarding Esau's manipulation.

We also find that when Jacob wanted to move out of his father-in-law's house, he needed to earnestly seek the agreement of his wives Rachel and Leah. He was not willing to implement a decision without their opinion and consent.

The guy wasn't looking for a wife, but for a housekeeper.

A student of mine, while she was dating, had an encounter with a fellow who took the curse of male dominance as an ideal standard for a relationship. On the first date, he asked her, "Do you like to cook?"

She saw that her answers were shocking him, so she said, "Can I ask you a question?"

"Is this a job interview?"

It was clear the guy wasn't looking for a wife, but for a housekeeper. Women tend to make the same mistake by asking about the man's money making status and how good are his chances for advancements.

So Who are We Looking For?

In this union of male and female, in this oneness of opposites, the first human being reflected the image of God – a oneness that includes otherness and yet remains one.

The Torah records that after the human being was created, God said: "It is not good for man to be alone."

God determines that the human being needs "a helper," but it is a while before Eve is created. Instead, all the birds and animals are created and the human being is asked to name them. At the conclusion of which, the Torah tells us that he did not find a helpmate.

What does naming the creatures have to do with finding a helpmate?

The Midrash explains that God was playing matchmaker. God was fixing up the first human being with all the animals in the garden. And Adam was going out on dates. Well, imagine Adam standing there in the lobby of the Paradise Hotel. He is waiting anxiously and who walks in but... "That's a... that's an... elephant! Umm... this isn't going to work, God."

The right spouse will respectfully engage you on parallel ground.

Poor Adam. He was surrounded by all these animals but he wasn't happy. Now why couldn't he be happy with an attractive giraffe or a cute little chicken? Because an animal is subordinate to man; it's not his equal. In fact, Adam was commanded to "have dominion over the fish of the sea, and over the birds of the air, and over every living thing that moves on the earth" (Genesis 1:28). Adam cannot overcome his loneliness and find true love with a subordinate being over whom he rules.

The Torah is very clear in describing an appropriate spouse. God said, "I will make a fitting helper who is kenegdo" – against him, opposite and parallel to him. In other words, God will create for him someone who, in a very positive, respectful way, will stand opposite him and engage him on parallel ground.

An animal may be a great help to man in doing his work, but an animal cannot be the "significant other." You will not be ultimately satisfied in the quest for love unless it is with someone you acknowledge is your equal, and whose difference you respect.

That's not to say that some insecure men would prefer not to be challenged. I have heard guys advise each other: "Get yourself a young girl, one you can mold." And yes, a man might find someone young and vulnerable and try to make this woman fit his ridiculous fantasy of a wife who considers him the lord and master. But he will only make his life harder as a result. He will have a very lonely existence, and he will sorely miss the engagement that a "helpmate kenegdo" would have provided, an engagement that is essential in the process of spiritual growth. All the sadder, because, in this way, he will deprive himself the opportunity of being the living manifestation of God expressed through the ability to love, making a space within himself to include a other.

In order to love, you need to withdraw yourself from the center and create a space for another in your life. Love starts only when you do that. In other words, if you are self-centered, you are not ready for love. If you are self-centered, you can't make enough space to nurture another. And true love is not only creating that space within your life for another, but also giving him or her that space and respecting and maintaining that space. It is being a part of another life and removed from that life at the same time.

Once we're able to withdraw ourselves from the center and create space for another, we must develop the keen sensitivity for just how ly different – just how other – our partners are. We tend to see what we have in common, and we tend to overlook the differences. When people say, "love is blind," this is what they mean.

True love is seeing both the good and the bad.

This is very hard, because we tend to want to fit those we love into our imaginary pictures of love. And if they don't quite fit, we want to alter them to fit.

But if we succeed in seeing not just what we have in common with those we love, but what makes us different, and if we appreciate and honor those differences, then we can take the next step toward giving of ourselves to that person. And simultaneously we must enable our partners to do the same for us, which means allowing them to make a space in their lives for us, allowing them to acknowledge our otherness, allowing them to give of themselves to us.

Rabbi David Aaron www.rabbidavidaaron is Founder and Dean of the Isralight Institute, and author of: Seeing God, Endless Light, The Secret Life of God, Kabbalah Works[audio book], and most recently, Inviting God In: Celebrating the Soul-Meaning of the Jewish Holy Days. .

7 Ways to Relax and be Less Intense on a Date

How Do I Get a Second Date?

Not Feeling It, Should I Break Up?

How to Reduce Your Dating Jitters

Good Enough?
Should I Break Up, Get Engaged or Keep Dating?
Time Is Your Precious Commodity
A Constant World in Flux
Comments
MOST POPULAR IN Dating
Our privacy policy