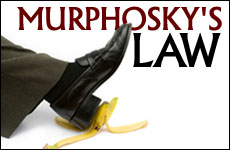 We've all heard it, read it, and, as Jews, definitely lived it: "Murphy's Law" or some version of: "If anything can go wrong it will."

But who is this Murphy anyway? Do we know him? Does he know from "going wrong?" We all know who the real experts are in this department. Us.

Who, more than Jews have had higher hopes and rainier parades?

I say, Murphy-Shmurphy! His real name was probably Hyman Murphosky.

I say, Murphy-Shmurphy! His real name was probably Hyman Murphosky, an old-world haberdasher from Minsk, who, expecting to prosper, bought a used steam machine that shmutzed and burned so much of his inventory, that Hymie's son, Melvin, had to forego his medical education to pinch fedoras. "Oy-oy-oy," cried Murphosky the elder, while his son sat, hunched over and pinching.

"If anything can be farpatshekt (messed up), trust me – hold onto your hat! Personally, there should be a law. "

From there, it was only a hop, skip, and jump to a compendium of Murphosky's Law(s). So in honor of Hymie and Melvin Murphosky, I bring you examples of MURPHOSKY'S LAW ...plus a few corollaries.

* When guests ask what you'd like for your Birthday and you say: "Feh! All I want is your company," that's all you'll get.

* If you tell your child he should take up a career that makes him happy, he'll become a mime.

* After you've won the "Manischewitz Matzoh ball Cook-off," your mother-in-law will always say: "Could use a little salt."

No matter how much of a bargain you get, your sister-in-law will get it cheaper.

* No matter how much of a bargain you get, your sister-in-law will get it cheaper.

* Tell your daughter and son-in-law, "Go on vacation, darlings, there will be other Mother's Days," and you'll get a postal card from Aruba.

* If your mother says everything's all right, call 911, as something's very very wrong.

* No matter what you cook, everything will taste like chicken.

* The more expensive the carpet, the greater the probability of a borscht stain.

* If anything can go wrong it will ... when Mr. Murphosky's mother is visiting.

* Everything that has gone wrong for anyone else, went less wrong than it did for you.

* Call something a minor problem, and some "maven's" sure to turn it into a big tsimmis.

* Teach your parrot Yinglish, and his first will be "yutz" – to your boss.

* Always assume the bottle is half-full– unless it's your last bottle of diet Dr. Pepper in which case your brother-in-law, the chazzer, will drink it.

* Whenever you wake up to write a brilliant joke for your act on a napkin, your mother will decide to "tidy up" – at 6 a.m – for the garbage man.

* No matter how many times you try for roast beef, it'll come out brisket.

* Tell your daughter, "Go, you might meet somebody," and she will – a doctor named Mohammed.

* Try to teach a meshugener something, and not only will you become meshugge, but he'll be better at it.

GREAT GIFT IDEAS FOR THE HOLIDAYS: Marnie Winston-Macauley is the author of "Yiddishe Mamas: The Truth About the Jewish Mother" and the award-winning "A Little Joy, A Little Oy" calendar. Her 2009 calendar can be found on Amazon and fine bookstores.

Go for the Gold(berg)!
Korach 5782: Visit to Lift the Spirit
That Time The Ivy League Found A Way To Limit Jewish Enrollment
Would You Rather Be Right or Happy?
Comments
MOST POPULAR IN Jewlarious
Our privacy policy