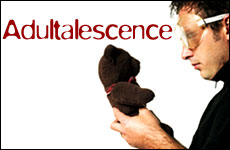 There's nothing wrong with babying your baby. Unless he's 30.

"Did you remember to buy me Pepsi, gummy bears, and chocolate chip cookies -- the soft kind?" asked my son, as I schlepped in 30 plastic shopping bags, each holding two items: something made of steel on top of something made of squish.

"Good. What about the Altoids ... and cigarettes?"

Like many bizarro boomers, when I gave birth, I vowed to be parent-perfect. My child would be allowed to "express" himself, "be" himself, "find" himself. As a Jewish parent, "perfect" was a starting point. I was determined to be a "Joomer" – Boomer mama deluxe.

Which is why I'm asking him if he prefers U-Bet or Metamucil with his Oreos.

Not too long ago, I read an article on a hot new life stage: "adultalescence." It's characterized by Boomer parents serving up pity, a "pad," and pablum to their adult offspring who have moved "back in" -- or never moved out.

Oy, I wondered. Whatever happened to that sad little hyphenate we invented for our own parents? "Empty-nesters?" Remember them? The Jewish mama who felt outsourced when we found out that ketchup wasn't the only condiment and we wouldn't be struck by lightning if we dated a goyishe guy. As soon as we learned these marvels, we left. (Okay, we ran.) And we didn't look back much, unless positively forced to -- in therapy.

With age, we narcissists started to wonder about our empty-nester parents. "What would they live for?" we worried. As usual, life had a way of putting things right. Somehow they managed to muddle through. With the miracle of anti-aging shakes, Viagra, and "wellness clinics," they danced around early bird buffets, booked into elder-hostels, and downsized to motor, and manufactured homes in places like Miami Beach and Scottsdale.

And the joke was on us. Not one was a two-bedroom.

While mama and papa were learning to rap, line-dance, and traverse the Rockies in their RVs, we were working two careers, caring for our own 30-year-old "kids," and couldn't send them to their bubbe and zayde whose "guest room" consists of a pull-out sofa.

So we're stuck with our "adultalescents" -- the snazzy new psycho-babble for kids who don't leave home till they're eligible for Medicare.

We're stuck with our "adultalescents" -- the snazzy new psycho-babble for kids who don't leave home till they're eligible for Medicare.

In fact, in at least one country, Italy "adultalescence" is being recognized by the laws of the land.

Not long ago, the Italian high court ruled a father had to pay child support for his 29-year-old son until "he is able to find a job that satisfies his aspirations."

Our adult slackers finally found it. A way to affirm their "right" to lay around like road kill until their talent is fully recognized – or they inherit the house.

Our generation that had two simple goals: 1) avoid global destruction, 2) move out.

Our aging kids' goals? Avoid global destruction -- and stay IN ... while "musing upon a job that satisfies their aspirations."

But more, the Court not only affirmed our aging offspring's right to claim our IRAs as their sole support, the Justices gave it a cause. Yes. Here I thought this was a problem we boomers and Joomers created, thanks to our "constant clap clap" parenting. Ah, but the Supreme Court of Italy has given us a reprieve. We have something else to blame. It's called Culpable Inertia or "CI." Yes. Much like ADHD, slackerism is now a ... "condition."

So the very next time you find yourself asking your 37-year-old bohmer and bohmerkeh if they wants a bissel Manischewitz with their Lunchables, you needn't fret, defend, or slink in shame. No, hold your head high and yell for all to hear: "Excuse me, but he suffers from ... CI ... ‘culpable inertia.'"

I tell you, I'm going. Oh yes. I'm changing my name to Marnafia, putting an ad in the Naples Gazette, myself up for adoption, and finding me a nice Yiddishe Italian "papa" who'll pay my way until I'm able to find a job that "satisfies all of my aspirations." Ballet's nice ...

New Jewlarious Blog #2
Vayelech 5783: Regret and Repent
Rabbi Sacks: Focus On the Important, Not the Urgent
Put Your Foot Down: Are Human Feet Poorly Designed?
Comments
MOST POPULAR IN Jewlarious
Our privacy policy
Aish.com Is Looking for Great Writers