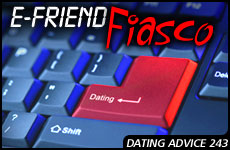 When her marriage went dry, she went looking online. And then the trouble really started.

I am a 32-year-old woman with a big problem. I met a man online and we developed a friendship over the Internet. He was in his 60s, so I felt safe talking to him. He spoke of his family -- he said he was married with three older children, and even grandchildren. I am also married and have three children, and my husband lives in another country.

We became friends online, and eventually we met a few times in person. Deep down I was really hoping this could develop into something serious. Then, I went to work for the same company that he works for -- and he suddenly stopped talking to me. He said it was affecting his marriage and had to stop.

Now I am not able to get him out of my mind. I feel so lonely and I am totally lost. How do I pull out of this?

Even though yours isn't a question about dating, many single men and women have experiences with on-line relationships, and that's why we've included your letter in our column.

But before we even address the issue of online relationships, we have to deal with the infidelity of your situation. It is morally wrong for a married person to get involved in a relationship outside the marriage. Unfortunately, many people think that as long as things don't "get physical," it's somehow okay to explore outside a marriage. But an emotional relationship is also wrong, dangerous and ill-advised.

Particularly with the Internet, people often start off innocently enough, because they feel there is a built-in barrier. But that's an illusion. You get emotionally involved, and you've crossed the line, bringing a destructive element into your marriage. Our strong advice: Don't start.

Having said all that, let's try to examine your situation in the general context of online encounters. It seems to us that your friendship with the man you met online evolved because you were lonely and needed to feel emotionally close to someone. That's the way a number of Internet friendships, as well as romances, begin. The privacy of e-mail conversations and the anonymity of a user name allows people to search for online companionship, even though in the "real world" they would never consider becoming involved with a complete stranger. The online correspondence can develop in depth, much the same way as an actual friendship gradually develops, as the people involved slowly open up to each other and share their experiences, inner thoughts, and feelings. Just like in "real life," the e-friends can feel deeply connected to each other.

The Internet provides a "safe" venue for these friendships to flourish. We use the word "safe" in quotes because there are actually many dangers lurking in relationships that develop this way. Some of those dangers include not knowing if an e-friend is telling the truth about himself, or has an ulterior motive behind the correspondence, such as using the correspondence as a "research project," or setting the other person up for a scam.

The dangers exist even if both people participating in the e-correspondence are honest and well-intentioned. For example, sometimes, after an e-friendship progresses, one of the parties involved wants to meet, but the other either will not or cannot do so. Perhaps he has trouble relating to others interpersonally, can't function well in the "real world," or is afraid to put a face on the person who has revealed innermost thoughts and feelings. (And this is assuming that he's an honest person who hasn't created a virtual identity for himself.) His e-friend, who isn't content to maintain an entirely virtual friendship, becomes frustrated.

Your e-friendship exemplifies another danger of an Internet friendship -- it can start as a way for two lonely people to have someone to talk to, evolve into something deeper, and then cause complications as it spills over into the "real world."

Another danger is that e-friends can become so dependent on their virtual relationship that their real-time relationships suffer. They may spend more time, or develop a closer emotional connection with their e-friend than they do with the people they interact with on a daily basis, such as spouses, siblings, friends, or relatives. They put so much emotional energy into their online friendship that there isn't much left over for interacting with other people. They may feel they don't have to nurture their relationship with their husband or wife, or put a concerted effort into resolving the problems or conflicts that are always present in day to day life, because they can escape to the cocoon of an e-friendship over which they have some degree of control. Websites such as Second Life exacerbate this problem immensely, by giving people an easy framework for playing out a fantasy life.

So, how do you deal with what you're feeling right now? We'd like to suggest that you first deal with coming to terms with the loss of this friendship, and then on creating a more fulfilling personal life for yourself.

There is no set pattern or time limit on how the grieving process progresses, or how long it lasts -- some people can emerge from their grief in a few weeks, while others take months, or even much longer. However, there are ways to help it along so that you don't remain stuck in it far longer than you should. One way is to start following a "normal" routine: getting up on time in the morning, grooming yourself and getting dressed, helping your children get off to school and taking care of the younger ones, going to work or taking care of your responsibilities at home, and finding some sort of outlet for your anxiety, such as exercising, being creative in some way, or pursuing a hobby. (We suggest that for the time being, that outlet not be Internet-related). Having a routine helps keep you from wallowing in self-pity and allows your unconscious to process many of your emotions and thoughts.

If this advice doesn't help, we suggest that you try following the ideas of a self-help book, or working with a grief counselor.

While the routine we've suggested will give you a framework to work through your grief, we think it's also a good idea to deal with the reasons you looked for companionship over the Internet and were vulnerable to becoming so invested in a doomed e-relationship. You've told us that you're lonely, and you long to be emotionally connected to someone.

Naturally, the first question to ask is why you were willing to get involved in something that would further distance you from your husband. You have not given us enough information about your relationship for us to know if you once had a close relationship, and if that closeness has deteriorated because he is not home frequently, or for other reasons. But we think the starting point in repairing your emotional life is to try to strengthen your emotional connection with your husband.

This is indeed possible. When a husband and wife both want to improve their emotional connection, they can learn how to regain the emotional closeness they once had, even when one of the partners lives a distance away and returns home periodically.

Perhaps you and your husband are so estranged that both of you do not want to try to connect emotionally. Even if that's the case, you can nevertheless strive to have a good "working" marriage -- one in which you treat each other with respect and consideration, and contribute in your own ways to each other's well-being and the welfare of your family. While a husband and wife in a working marriage don't enjoy the strong emotional connection that many of us want to have, the fact is that historically, marriages were often like this, and that even in the 21st century there are many couples who are content with this kind of marriage, and consider their relationship to be successful. Marriage counseling or therapy can help a husband and wife achieve and maintain a working relationship with each other.

If you and your husband are able to have a working marriage, there will still be times that you long to have an emotional connection with another person. We encourage you to find constructive relationships that will provide you with the friendship and emotional connection you aren't receiving in your marriage. One can be the loving relationship you have with your children. However, it isn't a good idea to focus all of your emotional energy on your children. It's also important for you to develop one or two close adult friendships, such as with a female friend or a relative. We also suggest channeling some of your energy to charity work, such as a community service project, and to a creative outlet or hobby, which will help you feel purposeful and fulfilled.

We hope these suggestions are helpful, and we wish you all the best.

Dating Maze #219 - What's the Prognosis
The Blue Beyond
Great Place to Live
Is Eating Supposed To Be Spiritual?
Comments
MOST POPULAR IN Dating
Our privacy policy