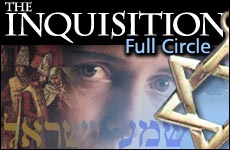 500 years after being forced to abandon Judaism, some descendents are starting to return.

Queen Isabella of Spain must be turning over in her grave. Five centuries after the Spanish despot sought to erase all vestiges of Jewish life on the Iberian Peninsula, a growing number of her victims' descendants are now emerging from the shadows, seeking to reclaim their long-lost heritage.

One such person is Nuria Guasch Vidal, whose ancestors were forcibly converted to Catholicism in Spain. At great personal risk, her forefathers secretly preserved their cherished, yet hidden, Jewish identity, handing it down from one generation to the next, clandestinely defying the Spanish Inquisition and its henchmen. As a child growing up outside Barcelona, Nuria never did quite understand why her family did not celebrate Christmas or go to church like their neighbors, or why every Friday evening they would set an elaborate table for dinner and proceed to dip the bread in salt before the meal.

It was only when her 88-year-old grandfather lay on his deathbed and pulled Nuria aside that she began to learn the truth about her family and her past.

After firmly instructing her not to allow a priest in the room once he passed away, Nuria's grandfather cryptically said, "I want you to reflect on your heritage and think for yourself. And then you will find the answer to all those questions you have been asking. It is your duty to return."

For Nuria, those words had a profound impact on her life, propelling her on a mission of self-discovery. Her research and persistent questioning of other relatives left little room for doubt: her forefathers had been Jews. And were it not for the persecution they had faced at the hands of the Inquisition, that is what they would have remained.

Who knows what suffering and trauma they had been forced to endure, living publicly as Catholics but secretly as Jews, surrounded by hostility, antagonism and outright hatred? From the records of the Inquisition, we know that its practitioners employed an array of tools designed to ferret out and quash any remaining Jewish embers in Spain.

Torture and public executions were imposed on anyone suspected of 'relapsing' to Judaism.

Torture, informants, denunciations and public executions were part and parcel of the reign of terror they imposed on anyone suspected of "relapsing" to Judaism.

According to historian Cecil Roth, over 30,000 so-called Judaizers were put to death by the Inquisitorial zealots in Spain and Portugal, many of them burned alive at the stake in front of cheering crowds of onlookers, while hundreds of thousands of others were tried and convicted by its courts for following Jewish practices.

Most people probably don't realize it, but the Inquisition continued functioning for centuries, hunting down "secret Jews" as far afield as Angola and South America. It was only in the 19th century that the persecutions were formally stopped.

"Since history began, perhaps," writes Roth in his seminal work, A History of the Marranos, "in no spot on the earth's surface has so systematic and so protracted a persecution ever been perpetrated for so innocent a cause."

This past Sunday, however, the sad and tragic journey of Nuria's forebearers finally came to a happy end. Together with her husband Edward, Nuria underwent conversion before a rabbinical court in Jerusalem, which formally welcomed them back to the people of Israel.

What Ferdinand and Isabella, Spain's 15th century monarchs, had sought to demolish through Inquisition and expulsion, Nuria was determined to bring back to life. Her return to Judaism was the culmination of a spiritual quest, one that led her and her husband to study with an Orthodox rabbi in Barcelona who embraced them and received them with warmth and understanding.

Slowly but surely they made Judaism the focal point of their lives, adopting the rituals and lifestyle of traditional Jews. They now attend synagogue regularly, observe Shabbat and keep kosher. Nuria has even organized a local group of activists, who took upon themselves the thankless task of defending Israel's good name in the local Spanish media, where the Jewish state comes under frequent, and rather fierce, attack from its critics.

After the rabbinical court judges accepted them, Nuria decided to become "Nurit," and Edward fittingly took the name of "Yitzhak," after the patriarch who was nearly sacrificed on the altar, only to be saved at the last minute by Divine intervention.

I did it, grandpa. I have returned. I am a Jew.

When I saw Nurit the following day, she was at the Western Wall, her eyes filled with tears. The first thing she had done, she told me, when she approached the ancient relic of the Holy Temple, was to touch its stones. She then cast her eyes heavenwards, and addressed her grandfather: "I did it, grandpa. I have returned. I am a Jew."

Hearing this story, I was overcome with emotion. What greater testament could there be to the power of the Jewish soul, to the eternal and unbreakable spirit of the pintele Yid, the Jewish spark that can never be extinguished? Across Spain and the rest of the Spanish-speaking world, there are untold thousands, possibly more, who still carry this spark within them, longing to return to their people, to come home again to the faith and beliefs that were so cruelly torn away from them over the centuries.

The Jewish people owe it to them and to their ancestors to recognize the anguish and suffering they have endured and to facilitate their return. The descendants of the Anousim (Hebrew for "those who were coerced") are grappling with profound issues of identity, history and faith. They should not have to do so on their own.

Specifically, there are a number of steps that can and should be taken to help them, including publishing more material on Jewish topics in Spanish, opening small and accessible Jewish libraries throughout Spain, and raising awareness about them among rabbis and communal leaders to ease their reintegration into the Jewish community.

Israel should also consider establishing a national memorial to the victims of the Inquisition, and it should press the Spanish government to do the same. This would be a highly symbolic, though important, measure, one which would both educate future generations about the trauma of the Inquisition, and confer upon its victims the recognition they justly deserve.

At a time when so many young Jews are leaving the fold, Israel now has an opportunity to recover countless numbers of its long-lost brethren. From Spain to Brazil to the southwestern United States, the number of Anousim coming out into the open is surging. The time has come to welcome them back home.

Command of the Sea
The 21st President of the United States: Failure or Inspiration?
Hiding Their Jewishness
The Jewish Pope: Following the Questions Home
Comments
MOST POPULAR IN Israel
Our privacy policy
Aish.com Is Looking for Great Writers