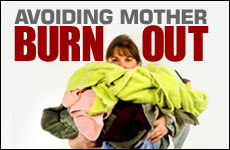 Practical advice for getting out of the "If only someone would notice" syndrome.

It's 9:00 AM, and by the time Lauren gets the kids out of the house she already feels like she has run a marathon. Exhausted, she tries to make a list of what she needs to accomplish that day, but she can't find a pen. "You're such a mess," she berates herself. "No wonder you can never get it together. You can't even keep track of a pen."

As the self-criticism mounts awareness of the day's already considerable accomplishments recedes into the background. Sandwiches had been prepared with the crusts cut off, assorted snacks were each inserted into the appropriate bag according to the owner's preference, children were delivered nicely dressed and on-time to their appropriate schools, and a quick trip to the grocery store was squeezed in on the way back home.

As she puts up a load of laundry Lauren notes with despair that the laundry detergent is running low, a fact that had slipped her mind during her mad dash through the grocery store. If she had a pen she could add it to her shopping list now, like her friend Miriam does, but it probably wouldn't help anyway. The list would just disappear into the bottomless pit of her purse before the next trip to the supermarket.

She knows that by the time her husband returns from work tonight the house will be a mess once again.

Lauren eyes the phone longingly, wishing her baby hadn't dropped the cordless into the bath-tub so she could call Debbie and compare notes on the morning rush hour. But without the cordless she just can't spare the time, not with the house looking like it does. She has a brief vision of Debbie's immaculate living room, conveniently forgetting her friend's indulgence of a cleaner twice a week. Grimly Lauren forces herself to confront the worst of the mess, starting with the children's rooms. She knows that by the time her husband returns from work tonight the house will be a mess once again.

Lauren has fallen into the "If only someone would notice" syndrome. She needs someone else to acknowledge her accomplishments in order to be able to value them herself. Furthermore, she is unable to recognize her own limits, and instead pushes herself beyond the point of exhaustion. Her legitimate need for a coffee and telephone break once she has successfully completed the morning rush hour goes un-validated. Lauren is on the road to mother burn-out. Her journey is being accelerated by the constant refrain of self-criticism and unflattering comparisons that accompanies her throughout the day.

As Lauren unpacks the groceries she notices how exhausted she is. She is no good for anything when she is this tired, and besides, anyone who works in an office gets a coffee break. She takes out a large mug with a picture of a woman holding a baby in one hand and a vacuum cleaner in the other underlined with the caption "Just call me superwoman." Although there were plenty of other mugs in the house already, Lauren bought this one for herself shortly after leaving her office job to become a full-time home executive. That is what she calls herself, since the word housewife has negative connotations for her. Selecting an herbal tea-bag from her ample collection, she sits down on the couch to call Debbie.

As she dials Debbie's number, Lauren acknowledges that the baby's breaking the cordless has been a blessing in disguise. It allows her to sit down and really connect with the person with whom she is speaking, rather than just half-listening as she runs around the house. It is true the conversations are shorter by necessity, but they are also more fulfilling. She'll give herself fifteen minutes with Debbie. Just like a quick shmooze with a colleague at the water cooler, she reasons to herself. Having colleagues is one of the things she misses most about her job. The loneliness of being at home was a big adjustment for her, and she tries to make sure she has some contact with a friend each day to alleviate her isolation.

Shmoozing with Debbie is great, but occasionally Lauren is troubled by unflattering self-comparisons to her super accomplished friend after speaking with her. When she catches herself making these negative self-evaluations, she reminds herself that everyone has her own strengths and weaknesses, and everything has a pay-off. It is true her house is a mess, but it is also the universally acknowledged "most fun house on the block," the preferred hangout of her children and their many friends.

As she goes in and out of their rooms she hears snippets of their conversations that give her a glimpse into her children's inner world.

As a result the house is never really clean. It is more like contained chaos. But in return, she always knows what her children are up to, and who their friends are. As she goes in and out of their rooms, putting away a load of laundry, or returning a stray shoe, she hears snippets of their conversations that give her a glimpse into her children's inner world. Sometimes, if she is lucky, they might even turn to her and say "What do you think, Mom?" These moments are rare, but they only happen as a result of her being on-hand and available, and this is a trade-off she gladly pays -- involvement and availability in exchange for external accomplishments.

Getting Out of the Syndrome

Every mother has an additional family responsibility -- to cultivate her own self-worth by acknowledging her accomplishments and silencing the voice of criticism and negative comparisons to others. At the heart of every burned out mother is an invisible woman who has been longing for some recognition and acknowledgement, and a chance to replenish her depleted resources. Taking preventive measures against mother burn-out is a truly immense kindness to the family, because it is impossible to run a home and function effectively when you are running on empty.

Don't sell yourself short. When the stress is on, especially during intense periods of giving such as the Holidays, throw out your incomplete to do list. Instead make a new list, a look how much I have accomplished list, in order to guarantee that your efforts don't go unrecognized. A real superwoman is a woman who can recognize her limits, and respects her accomplishments without being dependant upon external sources of validation.

The author is a marital & family therapist, who maintains a private practice in Ramat Beit Shemesh, Israel. She is also an acclaimed mental health journalist, who has made significant contributions towards increasing public awareness of mental health and mental illness. She is a regular contributor to thejewishwoman.org, chabad.org, aish.com and Binah magazine. She is the author of two books, “Mother in Progress” (soon to be released by Targum Press) and the newly released “Into the Whirlwind” (Lions’ Gate Press)

Happy Meals: Ten Ways to Keep your Children Engaged at the Shabbat Table

Kids and Sports: Our New Dysfunction

How to Raise Leaders

Our Children are Listening

Making Friends
Deep Breaths
What Happened to the Truth?
The Japanese Everything Bagel Spice Recipe
Comments
MOST POPULAR IN Family
Our privacy policy