V is for Victim 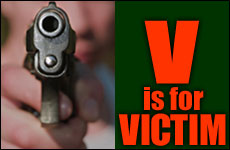 Victimization is becoming the greatest defense strategy known to mankind.

The title of Katrin Bennhold's December 14 article in The New York Times, "Privation and Despair Colored an Algiers Bomber's Life," refers to the recent carnage in Algiers where suicide bombers took the lives of scores of innocent people.

Larbi Charef grew up in a tough neighborhood in Algiers alongside other suicide bombers, with none of the advantages of the university students he killed on Tuesday.

The reader can almost go on drinking his coffee, staring at the picture of the shantytown in Algiers, bare soled, scantily clad children gaping at the camera in the shadow of half built facades. The reader can almost look into those children's poor, underprivileged eyes and see the eyes of Larbi Charef as a struggling young child, as an unemployed teenager -- and not as a 30-year-old "shahid" who detonated the deadly explosives in Algiers.

Almost. In today's cultural milieu, where withholding blame and exonerating moral turpitude is commonplace, juxtaposing Charef and the university students is almost routine. It seems that victimization is becoming the greatest defense strategy known to mankind, knowing no boundary of race, religion or creed, no geographical borders, and as of yet has no consummate adversary in the prosecution.

Who, in the history of our great, wide world, has been the most downtrodden, victimized nation -- in numbers merely a speck in humanity, but in tribulations a colossal mass? The Jewish nation.

We Jews have every excuse in the book.

We Jews have every excuse in the book. We can start the slideshow of our oppression back in Egypt, evincing sympathies with our postures stooped from backbreaking labor and the running blood of our children. We can skip from there to the destruction of the Temples and the fiery aftermath, and then skip ahead to the Inquisition, with photos of people being burnt at the stake. That ought to evoke an appropriate measure of clemency. We can throw in the Chelminitzki massacres for good measure, perhaps with sound effects of people being indiscriminately being dragged out of their homes to the slaughter. And of course, the crimson stain of Western civilization, the Holocaust, which predicted our decimation.

Could we not plead victimization as our defense? Does this not legitimize our right to wreak havoc upon the world and to plunge ourselves into the murk of moral abandon? And if not that, then at least we should have faded into obscurity, holed up in some desolate corner of the universe until we met with oblivion.

In Jewish law there is no notion of differentiating between two identical crimes on the basis of the person's socioeconomic background. There is no accounting of whether or not the person was able to receive appropriate therapy or a surrogate parent to wean them out of their quagmire.

Yes. People have onerous circumstances. But they also have the free choice to rise above them. Rabbi Eliyahu Eliezer Dessler, in his work, Strive for Truth, discusses how each person has a "point of choice" that is determined by a collaboration of nature and nurture. God knows what he doled out to you. And He understands. But it is not an excuse. Larbi Charef may not have been able to attend university, but he did not have to choose to kill.

And who would know that better than we would? Divine providence has often placed us between insurmountable rocks and hard places. But the Jewish people are very good climbers.

On August 19, 2003, a suicide bomber detonated his explosives on a packed bus returning passengers home from the Western Wall. Twenty-one people were killed, many of them children and infants. In the horrifying aftermath, the Israeli media noticed an unusual trend. Lily Galili in Haaretz spoke about the groups of observant Jews that banded together outside near the site of the attacks.

"But here," says Galili, "they did not speak of Yasser Arafat or Ariel Sharon, but of God Almighty, about themselves, about taking responsibility for what had happened to them... the ins and outs of which they do not know... The restraint and soul searching that has replaced the blame game."

We refuse to allow ourselves to become victims. And that is our choice.

And if we want to know what it is that drives our nation towards resiliency -- this is the answer. We have been through travails, and yet we look inward instead of outward in order to find the culprit. If everything is providential, then our victim-hood is as much a part of our destiny as our victories are. And so we pick up the pieces and propel ourselves onward, never playing the blame game or looking for an easy out.

And our history is rich with illustrations of our tenacious grip on not just survival -- but on growth.

Rabbi Yosef Karo, author of the Code of Jewish Law (Shulchan Aruch), was expelled from the Iberian Peninsula at the age of four. Had he viewed himself as a victim, he probably never would have produced his eminent work. And where would we be then?

The Bobover Rebbe, after losing his wife and family during World War II, rebuilt an entire chassidic dynasty in America. And David Hatuel, who in 2004 lost his wife and all of his children in a Gaza terrorist attack, remarried and is trying to rebuild his life.

The Holocaust predicted the end of our nation, but there has only been a resurgence of authentic Judaism across the continents. And today, to live in Israel is to witness the flag of surrender being buried underneath the teeming pride of our people, refusing to bar our doors, our streets and our hearts just because we are imperiled. Refusing to let fear dim the luminosity of our souls.

We refuse to allow ourselves to become victims. And that is our choice.

And so, to Katrin Bennhold and all the others sitting at their kitchen tables, or on the subway, looking into the eyes of the alley children, I pose to you this question. Could there be another way? A path less traveled... but far less tortuous?

The university students are now dead, and so is Larbi Charef. But one party was murdered, and the other party was the murderer.

Let's not forget that.

Five Lessons from the Paris Attacks

The Straightforward Arithmetic of Jihad
The Promise Of The Land
Which Chat Are You On?: Parshas Behar/Lag Ba’Omer
Do You Like Slow-Cooked Food? Thank the Jews
Comments
MOST POPULAR IN Society
Our privacy policy