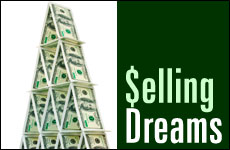 The economic turmoil has prompted many to ask, "Would a Torah-based economy be more immune to the mess we're in?"

Some people have pointed at issues of honesty and greed as being the Torah's rectification for a situation such as this. While it is certainly true that the Torah exhorts us to be honest in our dealings and frowns upon greed, it is hard to see this as the salient point regarding the current financial difficulties.

For one, the economic collapse was not brought on by any egregious issues of integrity. (The Madoff scheme, as bad as it is, was not the cause of the collapse; probably the reverse is true.) Yes, banks were aggressive in their lending practices, and corners were cut in approving loans. But any healthy marketplace includes energetic and ambitious vendors hawking their wares tirelessly. A visit to any of the "shuks" worldwide is sufficient to confirm this.

Society is built by people pushing themselves mercilessly for person gain.

And, yes, greed is a negative personal trait. But society is built by people pushing themselves mercilessly for person gain. Communist society fell apart precisely because there was no greed fuelling the appetites of entrepreneurs. No one had any gain from production and therefore apathy and lethargy were the prevalent mood of the workforce.

Furthermore, we don't need the Torah to tell us that dishonesty and excessive greed are wrong. Yet these weaknesses are part of human nature and difficult to resist. Is there any specific element of the Torah's laws on commerce that would help prevent the consequences of human weakness, and not just exhort them to do good?

Jewish laws of commerce do address one of the root issues with our economy. There is a very fundamental principle of Torah jurisprudence called "smichas daas". Loosely translated, it means a 'full commitment of the mind.' Under common law, any agreement signed and sealed between two parties is binding. Their agreement demonstrates a meeting of minds that obligates each party. The core of the contract is the obligation to keep one's word. The only test that needs to be applied is that the agreement was made freely and with full knowledge. Yet the Torah adds another qualifier: "smichas daas," identifying whether the human mind really commits itself to the deal.

A popular example of an agreement that fails this test is most forms of gambling. Although the person has verbalized his agreement, we evaluate that deep down he does not really intend to lose and pay for it. It is therefore not valid and the person collecting a bet is, according to Jewish law, wrong in doing so.

You cannot sell something that does not yet exist.

Another example, and this is closer to our point, is buying something that does not yet exist. If I sell you the rights to buy a house that I have not yet acquired, the sale is not valid. If I sell you the profits that I will receive from a deal, it is invalid. The exception to this rule is that when I buy a tangible object in order to gain from its future produce, then it is valid.

Thus if I sell you "all my rental profits for the year," it is invalid. That money is a nonexistent, non- tangible entity. Contrast this with selling a stake in a specific apartment complex for its rental income [as opposed to other possible benefits] which is valid. The reason is that as long as something is intangible and unreal no one commits full-heartedly -– there is no 'smichas daas' -- and therefore the transaction is null and void.

If we look at the financial vehicles developed over the last few decades, we notice that they are less and less tangible and more in the nature of 'promises on a future.' Stock prices tend to be based not on the value of a company but rather its anticipated value. Options for stocks are the anticipation of an anticipation. Securitizing mortgage loans means that the 'promise to pay' itself can be sold and bartered.

There is a reason why we have developed such a melange of exotic financial instruments. It has a lot to do with greed and the fetters of reality.

In a primitive society wealth has very clear boundaries. There are just so many figs, goats and tents in the world. Once I have acquired all of them, there are no more 'things' to acquire. However, once currency is introduced, it is possible to acquire 'wealth' without asking oneself if the money represents or means anything. But even money is limited in its accumulation. If one owns even a very successful business, it will still generate only a fixed percentage of profit. Unless one is a monopoly charging unregulated amounts of money, for a very necessary item, progress is slow.

Enter stocks. I can take a business that makes a fixed amount and cash in on 'an anticipation of profit' that is worth more than the actual profits. I can now go still a step further, and sell options to buy the stock and profit from an expectation (the option) about an expectation (the stock). And so on.

This financial system is to greed what fantasy is to desire. We protect our wishes and mistake them for reality. We revel in 'profits' that are simply a fantasy. As soon as there is the slightest indication of a downturn, we perceive our house of cards for what it really is and it all collapses.

Greed must always be checked by reality.

The Torah has evaluated the essential human psyche. We revel in fantasy but are confident only with reality. Greed drives the world, its commerce and productivity, and on that score it plays a positive role. But it must always be checked by reality. When commerce stands on solid ground, people avoid hard landings.

The Torah, even in its regulation of secular fiscal interaction, gave us a way of life that harnesses the positive aspects of ambition and entrepreneurship while guarding us from the dangers of economic fantasy. So long as our dealings are a bartering of tangible goods and the profit of real accomplishment, then it is valid. But once we have crossed into the realm of the fantastic, and the only goods we are marketing are dreams, then we have lost the right and protection of contract enforceability.

A viable economy must rest on the most solid pillars of reality; it cannot float on the clouds of illusion.

Madeleine Albright’s Secret Jewish Past
For Every Individual, A Torah Scroll
Allegiance To The Monarch
Meet the Real You: Yom Kippur
Comments
MOST POPULAR IN Current Issues
Our privacy policy
Aish.com Is Looking for Great Writers