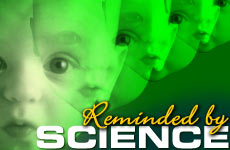 Recent developments in cloning and stem cell research remind us of a divine scientist.

Controversial contemporary medical issues like stem-cell research and cloning raise complex and subtle ethical questions. Is it proper to experiment on fertilized human eggs that remain after infertility treatments? To manipulate a human being's cells to produce, in effect, a younger identical twin? And as medical technology continues to develop, the quandaries will only increase. Jewish religious scholars have always viewed such issues through the lens of halachic tradition, and our own generation's halachic decisors will surely be focusing on the astounding advances in biomedicine in months and years ahead.

But even we simple Jews who are far from being experts in halacha stand to gain much from pondering current medical ethics issues -- not only because they are fascinating but because they are a reminder. Emerson conveyed a truth as only a great poet could: "If the stars would appear but one night in a thousand years, how would men believe and adore; and preserve for many generations the remembrance of the City of God." We human beings tend to perk up only at something novel. Were we suddenly able to fly at will or read minds or travel back in time -- ah, how we would marvel at the miraculousness of it all! And yet not only the scintillating night sky above us but the daily workings of the very bodies we inhabit are equally astounding things, and become more and more astonishing the more science learns.

Consider: When a sheep was first successfully cloned four years ago, what was essentially accomplished was the coaxing of genetic material to do precisely what it does all the time: code for traits, replicate and direct protein synthesis. The achievement of producing Dolly the daughter of Dolly, to be sure, was a major one. Myriad obstacles had to be overcome, and a single set of chromosomes, rather than the usual pair from two parents, had to be convinced to do the job. But it was still, all said and done, a job that takes place millions of times in thousands of species each and every day without capturing anyone's attention. And not a job at all, of course, but a miracle.

Heart transplants were never remotely as amazing as hearts.

Similarly, the unprecedented medical promise of stem cells -- undifferentiated human embryonic cells that can form practically any tissue of the body -- derives from modern science's ability to coax such cells to do, essentially, what stem cells routinely do in embryos everywhere. If such cells, culled from fertilized human eggs (or from adult humans, though most scientists feel the former are more promising) can be induced to develop into pancreatic cells, they will hold the promise of curing diabetes; if they can be convinced to turn into dopamine-secreting brain cells, they may be able to reverse Parkinson's disease; if into muscle, heart, liver or blood cells, they will figure prominently in treatments for muscular dystrophy, cardiac disease, liver failure, and leukemia. The list is potentially much longer.

And yet every healthy person, we might pause and remind ourselves, has sufficient numbers of all those very cells working constant miracles, cells that once developed from embryonic stem cells of their own. And so it behooves us all to step back a moment and consider: Are the technological breakthroughs really what amaze us here or is the true source of our astonishment and wonder the suddenly revealed workings of our bodies themselves? Once upon a time, after all, heart transplants, too, were flabbergasting. But, at least to thoughtful men and women, they were never remotely as amazing as hearts.

For Jews who put their faith in the Jewish religious tradition, resolving the formidable ethical issues surrounding things like cloning or stem cell research will have to await the guidance of Torah scholars. It would be unfortunate, though, if recent -- and future -- developments in science didn't seize our attention and leave us with a deeper awareness of the manifold miracles we routinely, if obliviously, experience, and a deeper realization of the fathomless debt we owe our Creator.

Let us ensure, in other words, that science not blind us but remind us.

Courtesy of Am Echad resources.

Life by Accident
The Promise Of The Land
Which Chat Are You On?: Parshas Behar/Lag Ba’Omer
Do You Like Slow-Cooked Food? Thank the Jews
Comments