All Bar and No Mitzvah 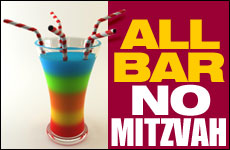 In planning my son's bar mitzvah I have begun to wonder if we as a community are not putting the emphasis in the wrong place.

It's been said that when it comes to raising children, the days go slow and the years go fast. As I find myself in the thick of planning my second son's bar mitzvah, these words ring all too true. But who has time for sentimentalism when you've got to pull off a colossal bar mitzvah bash in less than a year?

The first item on my party-planning agenda was to secure the entertainment.

"Bar Mitzvahs'R'Us," said a perky voice on the telephone.

"I'd like to know if you have availability on April 7, please," I inquired, cordially.

Fifteen phone calls and 14 rejections later, I'd managed to land a living breathing master of ceremonies (who'd miraculously just had a cancellation for my date).

The next morning, I was sipping Starbucks with an MC named Rhythm - a hulking, albeit friendly man who, I can only assume, plays for the NFL during his off-season - to nail down the details of my family's fast approaching event.

"Do you want to do the motzi?" asked Rhythm.

"How about a candle lighting?"

Things proceeded in this manner. Was I interested in birkat hamazon? What about feather boas? Did I want to do the hora? How about the chicken dance?

As Rhythm threw me option after option without missing a beat, I felt myself entering a transformational spin. Like Lynda Carter on the old Wonder Woman TV show. And when I stopped whirling, I was sitting on the other side of my frappuccino - in Rhythm's shoes (enormous though they might be).

I could suddenly grasp the stark bizarreness that this 300-pound linebacker - whose bling didn't include a single Star of David - was so incredibly well versed in terms like motzi and birkat, and, more bizarre yet, was using them in conjunction with terms like feather boa and chicken dance.

I could now clearly see what Rhythm (and the rest of the gentile world, for that matter) must think from the outside looking in at the modern American bar mitzva phenomenon. And how he might interpret the ways we Jewish parents choose to celebrate these meaningful religious rites of passage for our children.

On the heels of this revelation came an unsettling flashback to a Web site entry I'd encountered earlier during a cyber-hunt for hopping bar mitzvah party themes. It was written by a non-Jewish mother about her son's experience at a friend's bar mitzvah. Here it is, slightly abbreviated and 100 percent true:
Best bar mitzvah party theme – Terminator

My son William was recently invited to his friend Josh's bar mitzvah. William had never been to a bar mitzvah before, and he's still talking about it.

The invitation was a video tape of Josh, dressed like the Terminator and doing an Arnold Schwarzenegger impression: "Come to my bar mitzvah, or else!"

When I dropped William off at the five-star hotel ballroom, everything was decorated to look like metal. There were robots standing guard with blinking eyes and moving arms; destroyed tanks and cars strewn about (rented from a movie prop house); and inflatable jungle gyms and slides, all in camouflage colors. There was even a life-sized Arnold Schwarzenegger cutout for guests to sign.

After the aliya latorah, Josh made his grand entrance on a "T2" motorcycle - his bar mitzvah gift from his parents! Following the motzi, a live rock band played modern techno music. Josh did a really cool robot dance.

During the traditional candle lighting ceremony, Josh lit 13 candles with a butane lighter shaped like a Terminator rifle. My son wished he could take it home with him.

At midnight, Josh's parents announced that a collector's Terminator action figure was hidden somewhere in the ballroom. While everyone searched, an Arnold Schwarzenegger look-alike dressed like the Terminator walked in. Every kid got a picture taken with the surprise guest.

William had such a great time that he asked if he could have a bar mitzvah, too.

Fueled with newfound perspective and courage (and an unmistakable wave of nausea), I thanked Rhythm for his time and made a dash for my bookshelf to retrieve my dog-eared copy of the Book of Jewish Values to see what the ever wise and rational Rabbi Joseph Telushkin might have to say about the situation. He didn't let me down.

Lavish parties often end up diminishing, sometimes even eliminating, the religious significance of the bar mitzvah.

"Out of the desire not to appear cheap or unloving to their children, many... Jews feel forced to spend far more on [bar mitzvah] parties than they can or want to," he writes. "Furthermore lavish parties often end up diminishing, sometimes even eliminating, the religious significance of the bar mitzvah. For many of the celebrants, what counts is the ‘bar,' not the mitzvah."

What we desperately need, says Telushkin, are some "wealthy moral heroes... prominent, affluent Jews in our largest Jewish communities - to throw a simple bar or bat mitzvah celebration, one in which the party is very pleasant and celebratory, but not lavish." In doing so, he holds, "the good they would do for their fellow Jews would be almost incalculable."

In my community, I've seen a few brave parents heed this critical calling with wonderful results, and I - post-Wonder Woman-style transformational spin and faithful Telushkin fan - plan to do the same (even if I may fall a tad short of affluent, pillar of the Jewish community status at the present time).

At this stage in my bar mitzvah planning process, I'm still not sure where this journey will take my family. But I do know where it won't.

Sharon Duke Estroff is the author of Can I Have a Cell Phone for Hanukkah? (Random House). She is an internationally-syndicated Jewish parenting advice columnist, a freelance feature writer for national magazines including Good Housekeeping, Woman’s Day, and Parents, and a parenting blogger for The Huffington Post. Sharon lives in Atlanta, Georgia with her husband and four children.

Israel Brings Home Gold from Beijing
The Promise Of The Land
Which Chat Are You On?: Parshas Behar/Lag Ba’Omer
Do You Like Slow-Cooked Food? Thank the Jews
Comments
MOST POPULAR IN Funny Stuff
Our privacy policy