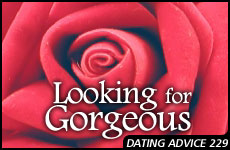 She's a wonderful young woman, but doesn't 'fit his image.'

I met a wonderful woman a few years ago and we have been friends ever since. We got along great together, our conversations flowed naturally, and anything we did -- even just doing nothing -- was fun together.

Then we started dating, and the problem started.

I feel that I have a standard of beauty for what kind of woman I should be with. This woman is pretty, but she does not reach that standard. I feel embarrassed when I walk down the street with her, because people look at me and think, "That's who he's dating??" I feel like I have an image to maintain and she doesn't fit that bill.

Since I couldn't see myself marrying her, I stopped dating her. Then I came to miss her and I berated myself for being so shallow to have allowed other people's opinions ruin that was going great. So we started dating again. This cycle of dating-and-stopping repeated a few times, because I can't shake that feeling that she's not good enough for me and I am embarrassed to be in public with her.

My question is: Am I throwing away the best thing that ever happened to me because of my pickiness? Or am I being realistic about my need for the ‘right look'? On one hand I feel petty, but how can I overlook what's important to me?

There's no question that a man had to be physically attracted to the woman he marries, just as a woman has to be attracted to her husband. The problem is that not everyone understands what this attraction should be. It's not thinking that the person you are with is exceptionally pretty or handsome, although some people mistakenly believe that this has to be the case. Rather, physical attraction means feeling satisfied with another person's appearance and liking the idea of having a physical relationship with that person. We can be physically attracted to someone who is quite average-looking, or feel no attraction for someone who is considered to be handsome or pretty.

It's clear to us that you don't have the right kind of attraction for this woman -- and never will. We'll talk more about this in a moment. Nevertheless, you've been trying to force yourself to develop that attraction, and it isn't working. That's because there's only a small window of time for attraction between two people to develop.

Many daters have been told, "If you aren't initially attracted to your date, but think she has other good qualities, give yourself some time to see if her looks grow on you." It's true that someone can become physically attracted to a date as he gets to know her better and is able to set aside his unconscious expectations that she have the "look" he's envisioned. However, the roots of this attraction tend to develop during a couple's first several dates. In our experience, if physical attraction hasn't taken root during the first three, four, or five dates, it never will.

Essentially, you've spent the past few years spinning your wheels by trying to make something that has all of the prerequisites for marriage -- except one -- into something that will be viable for the long term. In the process, you've probably broken her heart a number of times, and you've wasted a lot of time for you both. We can understand your desire to make things work, because she has everything else you're looking for. But that one crucial element is missing, and thus this is not meant to be.

We've written before about the "spinning your wheels" phenomenon: knowing there is a significant problem or personal quality that seriously troubles you, but nevertheless trying to make it work because the other person has so much else of what you're looking for. In our experience, if you can't resolve the problem or become comfortable within the first several weeks of dating, you never will. Dating for a longer period of time doesn't resolve anything, nor does breaking up and getting back together countless times. (On the other hand, minor problems that crop up during a courtship sometimes take a little more time to resolve.)

So, you have our opinion that she is not the right person for you, and its time to end your courtship once and for all so that both of you can move on. However, there are still two items in your letter we'd like to discuss. The first is the fact that you felt "embarrassed" to be seen with her because she didn't meet your expectations. We feel badly for both of you -- she for dating a man who couldn't be proud to be with her, and you for having such a poor self-image that you felt embarrassed to be seen with a woman who did not meet the impossible standards you set for yourself.

We're inclined to think that those standards don't bear any relation to what you actually can find attractive. They're more related to a desire you have to impress other people with your date's or wife's appearance. We tend to feel embarrassed to be with another person when we think he or she reflects badly on us. We could understand feeling embarrassed to be in the company of a dating partner who is rude, boorish, or unkempt, but there is something amiss when one feels embarrassed about dating an person with a good personality and a nice appearance simply because she's not superbly beautiful.

We suggest that you try to find out why you are so invested in what other people think about you. Otherwise, this insecurity will continue to interfere with your life. And the next time, even if it doesn't manifest itself in the area of ‘looks', it will probably show up in a different aspect of your relationship. Self-esteem isn't an area most people can address on their own. You'll probably benefit from enrolling in an intensive esteem-building program, or working with a therapist who specializes in self-esteem issues.

In addition, we'd like to help you reassess that "standard" of what you expect your future wife to look like. Try to let go of that expectation -- for two reasons. First, many people end up marrying someone who is very different from the mental image they had of what their future spouse would look like. If you're stuck on n idealized image, you might wind up turning down a woman who is right for you. The second reason is that the image you have is probably unrealistic anyway, and is probably related to your exposure to TV, movies and other mass media. These images influence our tastes, and can lead us to look for someone whose appearance meets their standards of beauty, instead of what we would normally find attractive.

Believe it or not, there was a time when human life was not continually assaulted by air-brushed images of super-models and actors who look amazing after spending hours in the cosmetician's chair and a small fortune on plastic surgery.

The antidote to this is taking some time to focus on "normal" people. A well-known matchmaker once told a client who insisted on only being set up with "drop-dead gorgeous" women, "I'd like you to stand on the corner of a busy downtown intersection for an hour. Then come back to me and tell me how many drop-dead gorgeous women you saw." Of course, he didn't see any ‘drop-dead gorgeous women,' although there were plenty of pretty and attractive women who passed by. When you acquire a better understanding of what physical attraction in marriage really means, and significantly tone down your exposure to mass media, you will be much better able to acknowledge your attraction for the woman you are dating.

Having said all this, we don't think you will ever be able to change your feelings for the woman you wrote about in your letter. There's too much water under the bridge for that. However, we do think that our suggestions can enable you to broaden the qualities you can be attracted to in the future. And we hope that you will soon meet the person who is right for you.