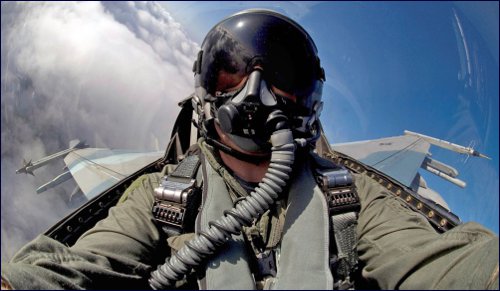 The author is a Major (reserve) in the Israeli Air Force.

Circling above the eastern Mediterranean in the cockpit of my F-16, I have a lot of time to think.

Though it takes only minutes to reach Gaza (Israel is the size of New Jersey), I have time to think while the IDF is deploying its series of hi-tech checks to verify the target is clear of civilians. For while our multi-layered warnings telling civilians to leave the area – leaflets, phone calls, and an explosive "knock on the roof" – for Israel one more calculation remains.

Is it moral to strike?

The rules sound simple: If the target is a murderous rocketeer, strike fast and hard. If it's a civilian, do not harm.

Reality, unfortunately, is not so simple. With Gaza's military matrix – rocket launchers, weapons factories, and munitions depots – dangerously embedded in Palestinian neighborhoods, schools, mosques, hospitals and private homes (in addition to the terror tunnels that IDF ground troops are now neutralizing), the IDF invests great money, time, and effort to ensure that every strike achieves "target clearance" – confirming it's a moral target to hit.

I recoil at how Hamas's asymmetric warfare – deliberately targeting Israeli civilians while cynically hiding behind Palestinian civilians – means that Israel must work to minimize civilian casualties on both sides. As a pilot I provide the final check and will cancel a target at the last moment due to the presence of children, who bear no fault and must always remain off-limits. I am saddened by the loss of every human life, yet clear that makes Hamas solely culpable for any "human shields" that remain in harm's way. And I am proud that collateral damage in this war has been far lower than, for example, the 1999 NATO strikes on Serbia.

I glance out toward my wing to inspect the munitions which are specially chosen for each target. With Gaza's urban density presenting a high risk of collateral damage from ricocheting shrapnel, these GPS-guided missiles are designed to hit with bulls-eye accuracy. Further, they are engineered with a delayed fuse, enabling them to dig deep into buildings to produce a more contained explosion – which is why photos often show columns of smoke rising straight up from the target site.

I look out at the beautiful Gaza coastline and reflect on how it didn't have to be this way. I recall the yearnings for peace that I and so many others had in 2005 when Israel withdrew every one of its soldiers and civilians from Gaza – giving Palestinians the opportunity to create a peaceful and thriving sovereignty that could have become the next Singapore.

Instead, Hamas swept to power, launching a reign of terror and kleptocracy where billions of dollars of international aid have been used – not for civilian infrastructure (can someone please tell me why there are still Palestinian "refugee camps" in Gaza?) – but rather to build a military operation that partners with the world's worst terrorists.

Iran, today's most dangerous global threat, is providing funds, training and weapons to Hamas. When an M-302 missile reached all the way to Israel's northern city of Haifa – in addition to rockets sent from Lebanese, Syrian and Egyptian territory – Iran was spreading its tentacles on our doorstep. We breathed a collective sigh of relief that just a few months ago the IDF intercepted the Klos-C ship delivering dozens of these advanced missiles straight from an Iranian port.

I swell with gratitude for those around the world who – with prayers, online campaigns, and pronouncements from the corridors of power – bravely stand with Israel. I am especially grateful for my American F-16 with its unique Israeli avionic upgrade, and I thank America for helping fund the Iron Dome missile defense system, which Israel developed – out of necessity – from concept to prototype to testing to fully operational in the unprecedented speed of seven years.

And I question the motives of those who stand in support of Hamas and its values.

I think of news footage from France of violent mobs trapping Jews in their synagogue, and I am reminded of dark times in Jewish history. I marvel at how, in just 66 years of statehood, Israel has welcomed immigrants from over 90 countries, and I am grateful to help provide a secure refuge in our eternal homeland.

I think about the long-term traumatic effects of my young children at home, being scurried to the bomb shelter every time an alarm goes off. With Hamas shooting deliberately and indiscriminately at 75 percent of Israel's population, it is our moral obligation to stop them. And I remind myself that despite those who point an accusing finger at Israel's low "body count," we must never be ashamed that Israeli civilians are well-protected from rockets.

Finally, should my two-hour sortie end with no Hamas targets passing the IDF's rigorous humanitarian test – thus sending me back to base with unspent munitions – I do so with the serenity of knowing that even under such challenging circumstances, Israel is guided by the timeless Jewish value that "all men are created equal" – and we are taking all possible steps to protect the sanctity of every human life.

Out of the Mouth of Roni
Megillah Gorilla Saves the Day
Challah Reuben “Grinder”
Big OnThe Little Things
Comments
MOST POPULAR IN Israel
Our privacy policy
Aish.com Is Looking for Great Writers