Touched By An Angel 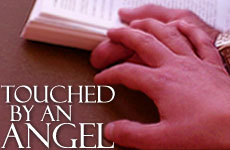 God has many ways to communicate with us. It's the unexpected ones we remember forever.

I had seen him for years, but basically ignored him. I guess that's what many people do with kids who have Down syndrome. Ignore them. It's "safer" that way. They're so unpredictable.

But this past Rosh Hashanah, all of that changed.

Moshe is almost 17. I'm no expert, but I suppose his retardation is moderate to severe. He's been coming to synagogue since he was 8 or 9. His mother brings him for the last 30-45 minutes of the Shabbos morning service.

Moshe's routine has not changed dramatically in these last 8 years. He ambles in to the Sanctuary on his own and goes directly to his father. Dad greets him with a huge, welcoming smile, displaying no discomfort or embarrassment whatsoever. Sometimes he will sit; other times he stands. More often he paces.

Up the aisle, around the bend -- sometimes stopping to stare at a random congregant for a few seconds -- while other times his trip is the non-stop variety. On some days he visits the cantor at the front lectern or the Rabbi; other times he skips them. No rhyme or reason, no destination. No apparent purpose.

In his darkened world of limited intellect, how much does he really comprehend?

Moshe rarely says anything either. His speech is rather garbled; his vocabulary limited. His favorite word seems to be, "Amen," always recited a second or two after the congregational, "Amen," and always 2 0r 3 decibels louder than ours.

It is curious how little attention he garners. Most of my co-worshippers seem to hardly notice him. No stares, no questions, little, if any, interaction.

And Moshe does not demand our attention. Other than the occasional "in your face," 3 second wordless stare, he just goes about his business. What exactly is that business? I have no idea.

I do wonder, though. In his darkened world of limited intellect, how much does he really comprehend? Does he recognize us from week to week? Does he feel the pain of his limitations? Does it matter if we smile and are friendly to him? Does his soul yearn for more?

Four years ago Moshe celebrated his Bar Mitzvah with a small gathering of family, faculty and schoolmates. Apparently, this event was quite meaningful to him -- the Bar Mitzvah picture album is his constant synagogue companion. In between his wanderings, Moshe will sit quietly and methodically turn the pages of this most treasured tome. Over and over and over again. Flipping, staring, awkwardly adjusting his recently acquired eyeglasses and sometimes slowly running his fingers over the cherished photographs, as if never wanting to leave those joyous memories.

Then came Rosh Hashanah. For the last 22 years, I have had the awesome and humbling privilege of leading the congregational service. I am not a cantor by profession, but my synagogue, like many, prefers to employ regular members like myself to lead the prayers instead of going the professional route. It is a responsibility I take very seriously and an honor I embrace.

This year was no different than most. My preparation, as usual, began many weeks before the Holiday. My family and close friends know all the telltale signs. The most obvious one is hypochondriasis. The mysterious "tickle" in my throat, the Vitamin C and E that I ordinarily scoff at, and the garlic regimen make their annual appearance. My mood becomes a tad edgy and more serious.

Yet there was something a little bit different about this year. The world. The world is different. Al-Qaida, suicide bombings, anthrax, Saddam, a rash of kidnappings, reality TV etc. The list is pretty extensive…depressing…and frightening. And then each one of us has his own personal anguish and tribulations to add to the list. No wonder the pre-Rosh Hashanah preparation period can be quite daunting -- especially this year.

"How could this happen?" I frantically wondered. "Where is my compassion? Where are my tears???"

But sometimes a strange phenomenon occurs. The fear, the dread, and the pessimism can be so great and so awful, that instead of propelling us to greater reflection, change and prayer -- the opposite takes place. We become inured…numb….almost indifferent. Thoughts like, "What's the use? Nothing will change," and "What's next?" begin to creep in to our mindset. Despondency rules. The feeling that we are just sitting ducks for the next misfortune or upheaval permeates our psyche. System overload cripples and overrides our inclination for inspiration and hope.

And that's what happened to me. Standing at the cantor's lecturn, on the holiest day of the year, I found myself in this very spiritual funk. The day had arrived. No more time for preparation; no more garlic or introspection -- just me, the prayer book, hundreds of fellow congregants waiting to be led and inspired, and God. But something was wrong. I began the Amidah -- the focal recitation of the day -- and invoked the names of the Patriarchs, but something was missing. Something inside. Something deep. Something very important. System overload had taken my heart away.

"How could this happen?" I frantically wondered. "Where is my compassion…my spirit…my soul? Where are my tears???"

My lips kept moving and the words were still audible, but they were perfunctory, listless, detached, and alone. Never before had I been so keenly aware of my disconnected feelings and my desperate need to remedy my disengagement.

I looked up from my prayer book only to find his silent stare just inches from my face.

And then, things got worse. Enter Moshe. As if my mind wasn't distracted enough already, I looked up from my prayer book only to find his silent stare just inches from my face. I felt like I had just driven over a six-inch pothole at 60 miles an hour. "Now?" I thought. "My concentration is in deep enough trouble as it is. Can't he just visit the Rabbi for a spell?" I pondered callously.

Uncharacteristically, Moshe seemed to linger at the podium. He just stood there, looking at me. Expressionless. Seemingly, frozen in time and in no rush to continue his conventional stroll.

And then something happened. It's not easy to explain, but I think for the first time, I saw Moshe. His gentility. His innocence. His soft hands and his silent eyes. I sensed Moshe's simplicity and wholesomeness. Here was a soul that was totally without sin, without blemish -- the very definition of purity right in my midst. Staring at me; somehow silently communicating with me. My lips continued to perform, but my mind was now lost in this angelic emblem.

I felt my pulse quicken. Suddenly I was riding the crest of an enormous spiritual wave, powered by the mere presence of a beacon of godliness.

Then without warning or fanfare, Moshe abruptly emerged from his momentary stupor. His eyes broke away from mine and fixed on the far end of the lectern. There, lying quietly and innocently, were a few stray tissues that I had placed as a usual precaution prior to beginning the service.

To my near amazement, I watched as Moshe looked at the tissues, looked back at me, and then carefully lifted one single tissue and tenderly placed it in the palm of my hand. It was the first real contact he had ever made with me. My prayers continued -- they had to -- but my mind was now far, far away. I looked at Moshe and firmly curled my fingers around my newfound gift. It was only a tissue, but at that moment from that person it was a precious symbol of the deepest understanding and care. The tears, only moments ago so distant, were suddenly unleashed.

Then I felt Moshe's warm touch as he reached out and began to tenderly stroke my hand.

It was then that I felt Moshe's warm touch as he reached out and began to tenderly stroke my hand. It was warm and comforting. He understood something about me and he wanted to help. One stroke and then a second.

I peered through my newly blurred vision, hoping to catch a glance at the expression of my newfound friend, but he was gone. Having completed his calling, Moshe was already en route to some new unidentified pew. My now rejuvenated prayers, buoyed by the simplest of offerings, resounded with passion and reverence as never before. And for the next two hours, I never released that thin, frail tissue from my grasp.

I made a new friend that day -- a friend who I thought understood so very little about this world. And he reminded me of a wonderful expression I once heard about children like Moshe. Some people come to this world to learn; others come to teach.

Young American Jews & Israel
For Every Individual, A Torah Scroll
Allegiance To The Monarch
Meet the Real You: Yom Kippur
Comments
MOST POPULAR IN Israel
Our privacy policy
Aish.com Is Looking for Great Writers