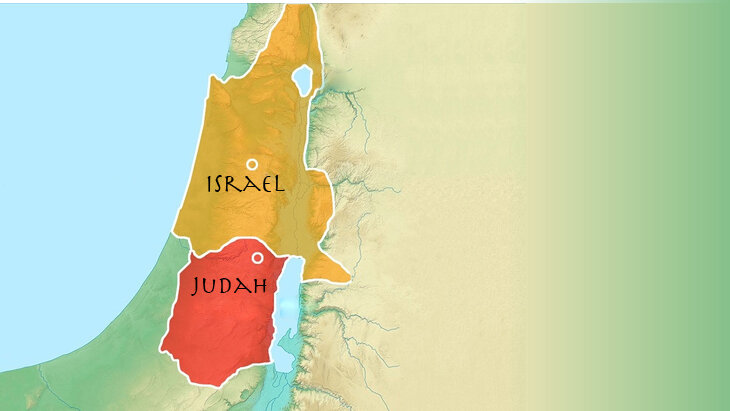 When King Solomon dies in 796 BCE, Israel is still a united country, but there is some tension between the north and the south. We have to keep in mind that the Biblical State of Israel was comprised of tribes but the king always came from the tribe of Judah (and Jerusalem sat on Judah's tribal border) which could be viewed by the other tribes as unfair. A wise king would have to be especially aware of the sensitivities of the other tribes.

Following the death of Solomon, his son Rehoboam becomes king, and in response to the political situation, goes up north to Shechem to have himself crowned. At this time, the northern tribes send a delegation to tell the king their complaints.

Chief of these is the toll that King Solomon's building projects -- the Temple in Jerusalem, his palaces, etc. -- had taken on the people in terms of taxes and forced labor. The northern tribes, in effect, ask the new king for a tax cut.

Rehoboam consults his advisors. The elders who had served under Solomon tell him to ease up on the people: "Speak to them gently, and they will be your servants forever." (1 Kings 12:7) But the younger upstarts advise him to show the people who is boss.

Rehoboam takes the latter advice and announces, "If you think my father was tough on you, just watch me! I'm going to be even tougher."

Rehoboam forgot that even God had called the Jews stiff-necked people. Jews are stubborn. In response to Rehoboam's arrogance, in the year 796 BCE, the northern tribes secede, creating a new kingdom called Israel. Rehoboam is left with just the southern part of the country and Jerusalem; his kingdom is called Judah. (The terminology we use today: Judea and Samaria {the capital of the northern Kingdom of Israel} has its origins in the split of the country after Solomon's death)

At first he considers waging war on the north, but the prophet Shemaiah warns him against it, telling him that he cannot possibly win as this rending of the nation had been brought about by God. While the immediate cause of the split is the weakness and bad judgment of Rehoboam, the ultimate cause is rooted in idolatry of Solomon's wives.

The split is clearly bad news -- it is a disaster for many reasons, both spiritual and geopolitical. The once strong, unified nation is now a weak, divided nation, and it is going to fall prey to the re-emerging empires of Egypt, Assyria and later, Babylon.

THE SCHEMES OF KING JEROBOAM

The king of the northern country of Israel is Jeroboam ben Navat. He is a great man -- a scholar who once stood up to King Solomon (I Kings 11:26-40) -- and a great leader.

But unfortunately, the old saying -- "power corrupts and absolute power corrupts absolutely" -- proves true. Pretty soon, Jeroboam is worrying less about leading the people and more about hanging on to his throne.

Jeroboam sees that the Jewish people in the north are still very strongly connected to Jerusalem. After all, that is where the Temple stands with its Holy of Holies and the Ark of the Covenant where the presence of God is most strongly felt. On the three festivals -- Passover, Shavuot and Sukkot -- the people continue to stream to Jerusalem. He sees that this commonality with the south could bring about a re-unification, in which case he will no longer be king.

So Jeroboam hatches a scheme. What does he do? He decides to set up an alternative place of worship in the north. He builds two other temples -- one in Beit El and one in Dan (where Tel Dan stands today).

That's bad enough in itself. But then he sets up golden calves in these temples and even uses the same language used in the Golden Calf story: "These are your gods, oh Israel, who brought you up from the land of Egypt!" (I Kings 12:28) This a blatant violation of the commandment against graven images. Furthermore, once you open the door to idolatry by introducing alternative sites and alternative modes of worship, it means trouble in the future.

Thus, a terrible period begins in Jewish history. In the next 240 years, there are 19 different kings of the northern kingdom of Israel -- all bad, with some much worse than others. They are idolaters, corrupt and evil, and they lead the Jewish people into idolatry.

Some of these kings are potentially great leaders, but spiritually they are off. And one thing we know -- if the Jews don't get their act together spiritually, they're not going to have their act together physically either. So, we see a time period of great political instability and "palace" intrigue, when kings come and go and the succession is usually very bloody.

Of all the bad kings of Israel, one who stands out on the worst list is King Ahab. Of him the Bible says:

He marries the infamous Jezebel, and built a temple to the Canaanite deity Baal, popularizing this form of idolatry among the Jewish people.

It's important to understand when you're reading the Books of Kings and looking at what the Jewish people were doing then, that the ancient people of the world were very religious and were always looking for ways to heighten their "spirituality." This is why idolatry was such a powerful draw and a ever-present obstacle that stood between the Jewish people and God.

A basic tenet of Judaism is that there is only one power in the world: God. There is no devil or other power competing with Him for control of the universe. The impure spirituality of idolatry was placed in the world by God to enable people to make the ultimate choice of living with or ignoring God. In the ancient world the attraction to idolatry was real and very powerful. This may be hard to fathom, because today we don't have the same drive for spirituality (I will explain why this is so later). Much of the Jewish people's drive to worship idols came out of a misguided desire to "enhance" their spiritual experience by incorporating Judaism and paganism. On a practical level it means that they were still keeping kosher and observing other Jewish laws, but they wanted "to have their cake and eat it too" -- they wanted both God and the spiritual high of idolatry.

The prophet of note at this time is Elijah. During this period of the divided monarchy, the primary function of the major prophets is to get the Jews of both Judah and Israel to turn away from their idolatry and evil ways and come back to God before it is too late. Elijah yearns to have the Jewish people repent. To this end, he decides to have a "show down" with the priests of Baal and to physically demonstrate the lie of idolatry to the Jewish people.

Elijah goes up north to Mount Carmel. Today the modern city of Haifa sits on the western edge of the Carmel Mountain Range. On the eastern side of the range is a place called Mukhraka, where there is a Carmelite monastery. In front of the monastery, there stands a statue of Elijah which commemorates the site where Elijah took on the priests of Baal.

Elijah wants the Jewish people to see that idolatry is nonsense and that there's only one God. So he challenges 450 priests of Baal to a contest. He proposes that each side offer a sacrificial bull to their deity and whichever deity sent a fire from heaven to consume the offering in full sight of the people would be accepted as the true God.

The priests of Baal really get into it. They've got their bull on the altar and they are beseeching Baal, shouting to the skies. But after nearly a full day of trying, nothing is happening and the animal carcass is only attracting flies. Meanwhile, Elijah mocks them:

They shout louder, but still nothing. So they start slashing their heads with knives. It's an ancient form of worship, based on using blood to get the gods excited. Still nothing.

It's really embarrassing now, and all the Jewish people are watching.

Toward the end of the day, Elijah finally gives order for the preparation of his own offering. He has it doused with water three times so it would be even more difficult to set aflame. He even has a water-filled ditch built around the altar. He then says one short prayer:

"Lord God of Abraham, Isaac, and of Israel, let it be known this day that you are God in Israel, and that I am your servant, and that I have done all these things at your word. Hear me, O Lord, hear me, that this people may know that you are the Lord God, and that you have turned their heart back again." (1 Kings 18:36-37)

With that a fire comes down from the heaven consumes the sacrifice, the wood pile, the stones, the dust, and licks up the water in the ditch.

The gathered multitude responds in awe: "The Lord He is God, the Lord He is God!" (This is the very phrase we shout at the end of the Yom Kippur liturgy every year; this is where it comes from.)

The priests of Baal are put to death by the crowd. But the story does not end there.

Hearing of what had happened, Jezebel sends a message to Elijah. "Tomorrow I will kill you." She knows that the memory of miracles does not last long. Today, the Jews are shouting "The Lord He is God," but tomorrow is another day.

Idol worship resumes soon enough and Elijah has to flee for his life; the impact of his miracle quickly fades from the memory of most of the population and the northern kingdom sinks even further down spiritually.

Eventually, God is going to get tired of this. There is a covenant after all, and the Jews are not keeping their part of the bargain. The covenant clearly specifies that the Land of Israel, along with its bounty, is given to the Jewish people on certain conditions. When they violate those conditions, they will be expelled from the land. And this is about to happen to the northern kingdom, though not yet to the southern kingdom.

The people who are just waiting to take over are the Assyrians, inhabitants of today's Iraq.