The Commandments: Part One 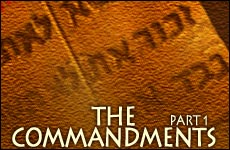 Understanding the origin and obligation of mitzvot.

The means through which Israel gains the good for which God created the universe are the commandments. If Adam would have kept his one commandment (not to eat from the tree), then he would have immediately attained this goal. Since he did not, numerous commandments are required.

It is for this reason that the Torah contains many commandments. It is thus taught, "God wanted to benefit Israel; He therefore gave them Torah and commandments in abundance." The essence of the Torah is its commandments.

Many of these commandments, however, deal with the laws of purity and sacrifice, and were thus only applicable when the Holy Temple stood in Jerusalem. Therefore, of all the commandments, only 369 apply today. Of these, 126 are positive, and 243 are negative.

Even of these, however, many only pertain to special cases or circumstances. The total number of commandments which apply to everyone under all conditions is 270. Of these, 48 are positive, and 222 are negative.

All the commandments, including their interpretations and laws, were given to Moses during the 40 days that he spent on Mount Sinai. God thus told Moses, "Come up to Me on the mountain and stay there. I will give you tablets of stone, as well as the Torah and commandments which I have written, so that you may teach them" (Exodus 24:12). Everything was thus given on Sinai.

There were numerous commandments that had been known at earlier times. The seven universal ("Noahide") commandments had been given to Adam and Noah. Later, circumcision was given to Abraham, and a dietary law not to eat the sciatic nerve (gid ha-nasheh), to Jacob. Jacob's son, Judah, instituted the levirate marriage (yibum). Detailed laws of marriage and divorce were given to Amram in Egypt.

We do not learn laws from acts done before the revelation at Sinai.

The Israelites were also given other laws before they reached Mount Sinai. The rules of the Sabbath were initially given to them when they first received the manna. Likewise, the laws regarding the honor due one's parents and certain judicial regulations were given at Marah, shortly before the Israelites came to Sinai.

Therefore, although the Torah embodied earlier laws, and was written over a 40-year period, its commandments all became binding at the instant of their acceptance at Sinai. As a religion, therefore, Judaism did not evolve, but came into being at once with the revelation at Sinai.

The Israelites accepted the Torah through both an oath and a covenant.

In presenting the Torah to the Israelites, Moses bound them by an oath. This oath was taken by all Israel at Mount Sinai. It is eternally binding, on all future generations.

The covenant consisted of three elements. First was circumcision for all males, just before the Exodus. Second was immersion for the entire people just before the revelation at Sinai. Third, they offered sacrifice. It was through this that the Israelites declared, "We will do and obey" (Exodus 24:7).

When a gentile converts to Judaism, he must accept all the commandments, in the same way that all Israelites did originally.

Whenever a gentile converts to Judaism, he essentially duplicates this oath and covenant. He must accept upon himself all the commandments, and then if he is male, undergo circumcision. Both male and female must then immerse in a valid mikveh. In this manner, they enter a covenant in the same way that all Israelites did originally.

It was this oath and covenant that established the special relationship between God and Israel for all time. Moses thus said, "You are standing before God your Lord… to enter into the covenant and oath that God your lord is making with you today. Today, He will thus permanently make you His people, and He will be your God, as He swore to our fathers, Abraham, Isaac, and Jacob. It is not with you alone that I am making this covenant and oath,.. but also with those who are not here this day" (Deut. 29:9-14).

The Torah and its commandments were given only to Israel. It is thus written, "Moses bound us by the Torah, an inheritance for the community of Jacob" (Deut. 33:4). Similarly, "[God] declared His word to Jacob, His decrees and laws to Israel; He has not done this to any other nation" (Psalms 147:19, 20).

Therefore, no law appearing in the Torah is binding on any people other than Israel. The only exceptions are the universal (Noahide) laws, which are known by tradition to be binding on the entire human race. This is usually indicated by a special scriptural redundancy, where the commandment is repeated especially for gentiles.

Therefore, there is no case where the law is stricter for gentiles than for a Jew. There are a few exceptions to this general rule, but these are all governed by specific traditions.

One of the foundations of our faith is the affirmation that the commandments were given for all times. It is thus written, "Things that are revealed to us belong to us and our children forever, to keep all the words of this Torah" (Deut. 29:28).

It is forbidden to add or subtract any commandment from the Torah.

It is therefore forbidden to add or subtract any commandments from the Torah. It is thus written, "All this word which I command you, you shall be careful to do it. You shall not add to it, nor diminish from it" (Deut. 13:1). It is forbidden even to interpret a commandment so as to add a prohibition not included in the tradition.

The Ten Commandments served as an introduction to the other commandments. They contain the essence of the entire Torah.

The Ten Commandments had formed the basis of morality and religion even in the times of the Patriarchs. They contain the main principles necessary for the survival of the Jewish people, both religiously and ethically.

God gathered the entire Israelite people to the foot of Mount Sinai and publicly declared the Ten Commandments. They were then written on two stone tablets. These tablets were placed in the Holy Ark, which was eventually stored in the Holy of Holies in the Temple.

It was through the Ten Commandments that the covenant was sealed. It is thus written, "[God] proclaimed to you His covenant, which He commanded you to keep -- Ten Commandments -- and He wrote them on tablets of stone" (Deut. 4:13).

In some places, the Tablets were called "tablets of the covenant" (lucot ha-brit). This indicates that they contain the words through which the covenant at Sinai was sealed. Elsewhere, they are called "tablets of the testimony" (luchot ha-edut), since they are permanent, tangible testimony to the existence of this covenant. The Tablets thus represented the physical reality of the covenant, the special relationship between God and Israel.

The reading of the Ten Commandments was originally included in the daily liturgy. There were, however, heretics who claimed that only these ten were actually given by God. Because of them, the reading was deleted. Moreover, it was legislated that they not be read as part of any public service. Although the Ten Commandments are of cardinal importance, all the commandments were given by God and are essential to Judaism.

The main significance of the commandments is the fact that they were given by God Himself. They are therefore the only means through which we can approach Him and fulfill his purpose in creation.

The commandments make Judaism more than a mere religious philosophy. It is a way of life involving action and observance, rather than a mere confession of faith.

The commandments should be observed because they were given by God, and not because logic demands it. The commandments themselves define a higher logic, as it is written, "Observe and keep [the commandments], for this is our wisdom and understanding in the sign of the nations" (Deut. 4:6).

It is likewise prohibited to keep any commandment as a superstitious luck charm. In no case were the commandments given for our own material pleasure.

From "The Handbook of Jewish Thought" (Vol. 1), Maznaim Publishing. Reprinted with permission.

Rational Belief
Bechukotai 5782: Divine Retribution
Behar 5782: Working to Live or Living to Work?
The Wholeness of Being Broken
Comments
MOST POPULAR IN Philosophy of Mitzvot
Our privacy policy