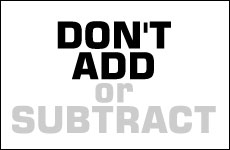 The mitzvot are immutable.

A king calls in his trusted minister and says: "I have an important mission for you to perform. Go to the neighboring kingdom and meet their leaders. But remember one thing -- under no circumstances must you remove your shirt during this meeting. Now go and do as I say."

The minister sets off on his merry way and soon arrives at the neighboring kingdom. There he heads straight for the palace where he meets with the king. In the midst of their discussion, he sees some of the king's officers pointing and laughing at him.

"Why are you laughing?" asks the visiting minister.

"Because we've never seen someone with such a pronounced hunchback," they say.

"What are you talking about? I'm not a hunchback!"

"Of course you are!"

"We'll bet you one million dollars that you are!"

"Okay, so take off your shirt and prove it."

At which point the minister remembers the parting words of the king... "under no circumstances must you remove your shirt during the meeting." Yet, the minister reasons, a million dollars would certainly bring added wealth to the king's coffers. I know I'm not a hunchback, so I'll surely win the bet. I am certain that under these circumstances the king would approve!

The minister removes his shirt and proudly displays his perfect posture. With pride in his achievement, he holds out his hand, into which is placed a check for one million dollars.

The minister can barely contain his excitement. He quickly ends the meeting and runs back to give the wonderful news to his king. "I earned you a million dollars!" exclaims the minister. "It was easy. I only had to remove my shirt to prove that I wasn't a hunchback."

Take the example of driving on Shabbat. Nobody disputes that igniting a combustion engine violates the verse in the Torah: "You shall light no fire on Shabbat." (Exodus 35:2)

But, the argument goes, isn't it better to have people driving to the synagogue than staying home? Isn't this an appropriate exception to Jewish law? Surely God would approve!

The experience of growing up in a Jewish community is lost.

Just like the hunchbacked minister, sometimes we are not aware of the underlying factors. When a community drives on Shabbat, that eliminates the necessity to live together in a single neighborhood. There is no longer a need for the neighborhood Jewish school, Jewish bakery, Jewish clubs, etc. Jewish families become spread throughout the vast suburbs and Jewish children are absorbed into the melting pot of secular norms and attitudes. The experience of growing up in a Jewish community is lost.

Indeed, the dean of a (non-Orthodox) American Jewish rabbinical school said that in retrospect, permitting Jews to drive to synagogue on Shabbat was a "mistake," because it "gave up on the desirability of living close to the synagogue and creating a Shabbos community."

This is not to suggest that Jews should live in some isolated ghetto. But if we are concerned about the problem of assimilation, and want to give our children a unique Jewish experience that will build throughout a lifetime, we need to recognize that sending them to a high school where they are among a lone handful of Jews may actually be encouraging assimilation.

Of course, when it comes to individual observance, Judaism is not all-or-nothing. A person strives to do their best, and no more can be expected. Judaism is a process, a journey, where every step counts.

But on a national level, we can't allow lower standards to be "institutionalized." The strength of Jewish law is its belief that human needs and desires remain consistent throughout history. Once Jewish law is held to redefinition for every family, every society, every generation, it ceases to be effective. The floodgates of "redefinition" open, and the system falls apart.

Certainly there are a variety of factors, but should it be any surprise that 60 percent intermarriage is ravaging our people? Perhaps this is why the Torah, following its command "not to add or subtract," declares:

"You have witnessed what God did with those who followed after alien worship – how they disappeared from your midst. But you who cling to God – you are all alive today." (Deut. 4:3-4)

Intuitively, it is understandable why not to subtract from the Torah. But why can't we add to the mitzvot? Isn't doing more always better?

Consider a great work of art. Would you add a few notes to a Bach fugue, or some brushstrokes to a Rembrandt portrait?!

Adding to the mitzvot is not serving God – it is serving oneself with what "feels good." Perfection, by definition, cannot be improved upon. Adding to the Torah implies that God is lacking. It is self-worship of one's own creativity.

Those who add, will come to subtract.

Furthermore, the same subjective judgment which decides to add, is that which eventually lead one to subtract:

At that point, says the Midrash, the snake pushed Eve so that she brushed up against the Tree. "See that!" said the snake. "You touched the Tree and nothing happened. God didn't really mean what He said. You touched it, now go ahead and eat it."

Those who add, will come to subtract.

Maimonides explains the importance of not tampering with the Torah:

"The Torah explicitly states that its mitzvot will remain binding forever, with neither change, addition nor subtraction... Therefore, if any person will arise – whether Jew or non-Jew – and performs signs and wonders, saying that God sent him to either add or subtract a mitzvah from the Torah... then we immediately know he is a false prophet... For God Himself told Moses that these commandments are for us and for our children forever." (Foundations of Torah 9:1-2)

Jewish law is a precise metaphysical science. For just as removing one wire from your cell phone means that it no longer can pick up reception, so too we mustn't tinker with Jewish law. As King David declares: Torat Hashem Temimah -- "the Torah of God is perfect" (Psalms 19:8). The masterpiece is marred – whether by adding or by subtracting.

The Commandments: Part One