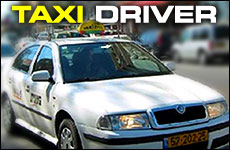 It had been a long and overwhelming day. My husband and I had just spent about four hours at a Jerusalem hospital, waiting, waiting, waiting, and finally meeting with a doctor about a necessary surgical procedure for my husband. Although, thank God, the surgery was minor, the expense was large and the hassle, inconvenience, and utter "schleppiness" of the whole ordeal were very strenuous.

We entered the hospital parking lot, got into the first cab we saw, too tired to haggle over price, and settled in for a quiet ride home. The driver was not an outwardly religious man but his inside was a different story. You can't live in the holy city of Jerusalem and remain untouched by God's presence. Like all Israeli cab drivers, he had a story to tell and he wanted to tell it. We exchanged pleasantries and then he started asking about our respective families. My husband, always the friendly guy, reciprocated with to his pleasant inquiries. "And how many kids do you have?"

"One," said the cab driver. "He lives in Las Vegas because he had to get away."

"You don't understand," said the cab driver. "Remember the famous wedding tragedy a few years ago?"

How could we forget? It was in the midst of the Intifada and here was something we couldn't blame on the Arabs. Due to faulty construction, a wedding hall had collapsed in Jerusalem during a celebration, killing 23 and injuring dozens of others.

"That was my son's wedding," the driver told us. "Many of our friends were killed, including my wife's father and brother. After that, my son had no peace. Reporters followed him everywhere and every friend and relative reminded him of the enormity of the tragedy that had taken place on the day that should have been the happiest of his life. He and his wife had to get away."

The cab driver continued with his tale. He explained that he used to be very comfortable financially. But while he waited for the lawsuit against the construction company to be settled, his personal medical bills had eaten away at his savings. Unable to return to his previous job, he had become a cab driver.

As the driver continued speaking, our horror turned to amazement.

My husband and I were horrified to hear this personal tragedy -- a story told without a trace of bitterness. But as the driver continued speaking, our horror turned to amazement. The cab driver explained how his whole perspective on life had changed. During his rehabilitation, the treatment of his injuries, and the mourning over the death of his friends and family, he realized how little money actually meant in his life. Instead, his greatest value was the health and well being of those he loved.

He went on to explain how this new perspective had changed his life. One day he was driving a very wealthy woman home from the hospital. After she heard his story and his words of inspiration, she begged him to come and speak to her daughter who had been suffering with a painful sickness in the hospital for weeks and had lost all will to live. The mother said she would pay him anything if he would cheer up her daughter. How could he turn her down?

This cab driver came into the hospital, spoke with the woman's ailing daughter and in fact succeeded in inspiring her. The grateful mother handed the driver a blank check and told him to fill it out for any amount, sure he would be thrilled with this once in a lifetime opportunity.

Instead, to her utter astonishment, he ripped the check up in front of her eyes.

"By refusing to accept monetary pay," explained the driver as we pulled up to our destination, "my entire reward will be from heaven, and there I can cash in much more than a million dollars!"

You gotta love the Jewish people, and especially those Israeli taxi drivers...

The Aliyah Chronicles: Saying Good-Bye
How I Learned to Love the Multiverse
10 Big Jewish Inventions
A Journey through Jewish Sicily
Comments