Return of the USS Liberty 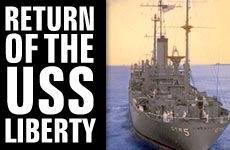 A new book accuses Israel of deliberately attacking an American ship in June 1967.

In 2001, major newspapers and media outlets reported the release of a new book, "Body of Secrets" by James Bamford. The book contains a number of unfounded and far-fetched accusations against Israel. In media interviews, Bamford has at times gone beyond the charges in his book. Let's put these accusations to rest.

In June 1967, an American ship manned by U.S. sailors and National Security Agency (NSA) personnel ventured close to the shores of the Sinai Peninsula. Too close. The U.S. ambassador to the United Nations declared that no American ships were within 400 miles of the conflict. The NSA issued orders to pull the ship away from the shore, but because of communications snafus, the orders arrived days later. Too late for the USS Liberty.

On June 8, Israeli planes and torpedo boats attacked the ship, leaving 34 crewmen dead and 177 wounded. The Liberty limped into port in Malta, and the controversy began almost immediately: Did Israel deliberately attack the USS Liberty?

Ten official U.S. inquiries and three Israeli inquiries concluded that the attack was a tragic case of mistaken identity. No American ships were supposed to be there. Egyptian warships were believed to be in the area. Large explosions were taking place along the Sinai shore, and Israeli troops believed they were under naval bombardment. Israeli pilots and sailors, in the midst of the '67 war swirling on three fronts, raced to attack what they believed to be an Egyptian ship.

For 25 years Israel's detractors have attempted to use the tragic incident as a wedge between the United States and Israel. Other than some of the embittered Liberty crew and die-hard conspiracy theorists, the charge that Israel deliberately attacked a ship of its most important ally found few takers.

Now with the release of "Body of Secrets," author James Bamford reveals secrets about the National Security Agency – and in doing so charges that Israel deliberately attacked the USS Liberty.

Why would Israel do such a thing?

Bramford claims that on the day prior to the Liberty incident, Israeli troops were massacring hundreds of Egyptian POWs and civilians in El Arish. Bamford concludes: "Israel's commanders would not have wanted tape recordings of evidence of the slaughters to wind up on desks at the White House, the UN or the Washington Post."

Since the book's release last week, Bamford has been interviewed by National Public Radio, Salon.com, CNN and others.

Bamford's analysis is skewed by his palpable distaste for the Israeli state.

The New York Times review found the section on the USS Liberty the "weakest" part of the book. "It hardly seems plausible," writes reviewer Joseph Finder, "that Israel would deliberately attack an American ship, killing dozens of sailors, risking a confrontation with a superpower and its only ally – in short, perpetrating one massacre in order to cover up another. Perhaps Bamford's analysis has been skewed by his palpable distaste for the Israeli state."

Bamford's anti-Israel attitude goes well beyond the USS Liberty attack. He charges Israel with decades of human rights violations and war crimes. Of the 1967 war, he writes, "The extensive war crimes were just one of the deep secrets Israel had sought to conceal since the start of the conflict... to hide much of the war behind a carefully constructed curtain of lies. Lies about the Egyptian threat, lies about who started the war, lies to the American president, lies to the UN Security Council, lies to the press, lies to the public... Into this sea of lies, deception, and slaughter sailed the USS Liberty." (page 203)

Incredibly, while accusing Israel of all those lies, Bamford ignores the calls for Israel's eradication issued by Arab leaders, Egyptian President Nasser's precipitous expulsion of UN peacekeepers along the border, and the closing of the Straits of Tiran which was a clear casus belli. In the words of President Johnson, "If a single act of folly was more responsible for this explosion than any other, it was the arbitrary and dangerous announced decision that the Strait of Tiran would be closed."

Bamford's charge of Israeli atrocities is actually a recap of an article written by a USS Liberty officer in a 1996 edition of the virulently anti-Israel "Washington Report on Middle East Affairs."

In an interview on NPR's "Fresh Air" program, Bamford related that at the moment of the alleged massacre, "the Liberty, which was an enormous United States eavesdropping factory, was sitting only about 13 miles off the coast, fully capable of eavesdropping on what was going on on the shore." And on page 236, Bamford writes that "on the morning of June 7, the Israeli military command received a report" that the Liberty was "secretly listening" while the war crime was taking place.

According to USS Liberty logs, however, as of midnight between June 7 and June 8, the ship was still 150 miles from the nearest coastal point of Israel and 50 miles north of the coast of Egypt. It did not reach its "Point Alpha" (18 miles east of the Sinai town of El Arish) until 8:38 a.m. on June 8.

No such fact has ever been published. No alleged transcript has ever been produced. Indeed, if an official U.S. aircraft was overhead, why didn't Israeli radars looking for enemy aircraft pick it up? Moreover, wouldn't an American NSA aircraft witnessing an attack on one of its ships attempt to seek assistance? No such distress calls were noted in any of the official inquiries.

According to a Baltimore Sun review of the book, an NSA spokesman uncharacteristically spoke out against Branford's slander. "We do not comment on operational matters, alleged or otherwise; however, Mr. Bamford's claim that the NSA leadership was 'virtually unanimous in their belief that the attack was deliberate' is simply not true," the spokesperson said.

In fact, contrary to Bamford's sensationalistic work, a variety of exhaustive research concludes that Israel made a mistake that was by no means deliberate.

One important top-secret NSA document in the U.S. National Archives is entitled "Attack on the USS Liberty" (SRH-256). The 77-page brief, declassified in 1983, concludes: "Reexamination of Israel's explanation of why its air and naval forces attacked the Liberty reveals egregious errors in both command judgments and operational procedures."

This document is the subject of a doctoral thesis by A. Jay Cristol, who happens to be Chief Judge of the U.S. federal bankruptcy court in Florida. A former U.S. Navy flyer in the wars in Korea and Viet Nam, he knows ships and planes inside and out. Plus, as a former navy lawyer who served in the Pentagon, he is well-versed in the ways and command structure of the U.S. Navy. He served a total of 38 years in the U.S. Navy and Naval Reserve. Cristol reviews the gamut of conspiracy theories, and after exhaustive research, including more than 220 interviews, concludes: "This research project supports the validity of the conclusions of the official investigations, that the incident was the result of a series of tragic mistakes."

More important information on the Liberty appears in this month's edition of Azure: "USS Liberty: Case Closed" by Michael B. Oren.

Some of Bamford's interviews and reviews:

Monochrome within a Rainbow

Seven Blessings: Q&A with the Author

A Revolution Named Zahra
Bechukotai 5782: Divine Retribution
Behar 5782: Working to Live or Living to Work?
The Wholeness of Being Broken
Comments
MOST POPULAR IN Arts
Our privacy policy