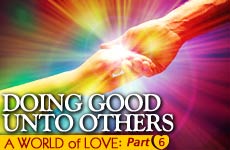 Doing good unto others is a key component of spiritual health.

As we have said, one of the ultimate goals of man is the imitation of God. We do this in every good act, paralleling God's own creation of good. The most direct way that we can do this, however, is in our actions toward our fellow man.

God's purpose in creation could have been fulfilled with the creation of a single creature to accept His good. Such a creature, however, could never truly resemble God. God Himself is a bestower of good, and if only one creature existed, then to whom would it do good? Certainly not to God, for God has no needs. It is for this reason that God created the world as an arena for an entire species of man.

The relationship between man and woman is similar to that of God to the world.

God then created woman as a counterpart of man. The relationship between man and woman would be very much the same as that of God to the world. It is for this reason that we always refer to God in the masculine gender, since He is the active creative force in the world. God is the archetype of the masculine and His creation is that of the feminine. Woman was therefore created from man, just as the world came from God.

Man can become a partner of God in the procreation of children. Just as God is a creator, so man also becomes a creator of life. Our sages therefore teach us that there are three partners in the procreation of a child: his father, his mother and God (Talmud - Kiddushin 30a). The sexual act is the vehicle through which man displays this aspect of his partnership with God, and this is one reason why its perversion is considered among the worst of sins.

ALL IN THE SAME BOAT

In a spiritual sense, the good that man does also benefits every other human being. Thus, in doing good, one is at least indirectly benefiting his fellow man, even in the case of ritual laws that do not directly do so. Our sages thus teach us that every single Jew is morally responsible for every other (Talmud - Shavuot 32a).

The author of "Reshis Chochma" explains that all souls are bound together, as with a rope, and the movement of one is reflected in every other. This is what the Torah means when it says, "One man sins, and anger is directed against the entire community" (Numbers 16:22).

The hole may be under one seat, but the water will sink the boat for all of us.

The Midrash (Vayikra Raba 4:6) provides us with an excellent example illustrating this: A number of people are sitting in a small boat. All of a sudden, one man begins to drill a hole under his seat. When the people complain, he retorts, "What complaint do you have? After all, I'm drilling the hole under my own seat." Finally a wise man answers him, "We are all in the same boat. The hole may be under your seat, but the water that comes in will make the boat sink with all of us."

In a spiritual sense, we are all in the same boat. Every good thing that we do affects all mankind, and the same is true of all evil. In every good act that we do, we imitate God insofar that we ultimately bring good to all humanity. This is indeed one reason why God put us all in the same spiritual boat.

Of course, we do this more directly when we do good toward our fellow man. This is the archetype of all good. There is no way of imitating God more closely than in doing good to others.

ALL THE REST IS COMMENTARY

In the previous section, we quoted the Talmud (Sotah 14a) as saying that we bind ourselves to God by imitating His ways. But in what ways does the Talmud say that we imitate God? Look at its words carefully:

In another place, the Talmud (Shabbat 153b) says that we must also imitate God in His mercy and compassion. The general lesson is that we resemble God most in our relationship with our fellow human beings.

This concept is best exemplified by the famous story of Hillel. The Talmud (Shabbat 31a) tells us that a non-Jew once came to Hillel and said, "I wish to convert to Judaism, but only if you teach me the entire Torah while I stand on one foot."

What is hateful to you, do not do to your fellow man. The rest is commentary.

Hillel replied, "What is hateful to you, do not do to your fellow man. This is the core of Judaism. The rest is mere commentary."

Many of the commentators find this story very perplexing. The commandments dealing with our relationship toward our fellow man are certainly very important. But there are also many other important commandments that apparently have nothing at all to do with other people. How could Hillel have dismissed these as mere commentary?

This is also the meaning of what God told His prophet, "He judged the cause of the poor and the needy, and it was well. Is this not to know Me?" (Jeremiah 22:16) As discussed earlier, we can only know God by drawing close to Him through imitating Him. God is telling us that the main way in which we know Him is by imitating Him in doing good to others.

There is a commandment in the Torah, "You shall love your neighbor like yourself" (Leviticus 19:18). One of our foremost leaders, Rabbi Akiva, said, "This commandment is the core of the Torah." Rabbi Akiva is teaching us the same lesson as Hillel. We imitate God's love for the world through our love toward our fellow man. In this way, we draw ourselves close to God and fulfill His purpose in creation.

COUNTED AMONG THE DEAD

In a deeper sense, the concept of love itself is the archetype of spiritual closeness. Where a bond of love exists between two people, they are close -- even though they may be separated by vast distances. On the other hand, people who hate each other are far apart, even when they are sitting right next to each other. Love and hate exist in a spiritual, rather than a physical dimension. Love between two people implies a harmony and complementarity between them. It is this harmony that makes them close, irrespective of physical distance.

In obeying God's commandments, we seek to bring a similar harmony and closeness between ourselves and God. "You shall love your neighbor as yourself" is therefore indeed the prime rule of the Torah. It not only leads us to a closeness to God, but also teaches us the meaning of such closeness.

Following a similar line of reasoning, we can understand what our sages mean when they teach us, "He who denies the doing of kindness is like one who denies the most fundamental principle (God Himself)." God is the ultimate bestower of kindness, and one who divorces himself from such deeds, places himself poles apart from God. God is the ultimate doer of good, and this man denies doing good. He is therefore said to be like one who divorces himself from God.

God is the source of all life, and therefore, the more one resembles God, the more he partakes of life. One who clings to God is said to be truly alive, as the Torah says, "You who have clung to God are all alive today" (Deut. 4:4). One who divorces himself from God, on the other hand, is considered dead.

God is a giver, never a receiver.

This is the meaning of what the wise Solomon said, "He who hates gifts shall live" (Proverbs 15:27). For God is a giver, never a receiver. When one refuses to become a receiver, he resembles God in this respect. We thus find, "Charity saves from death" (Proverbs 10:2). When one gives, he resembles his Creator, the source of all life.

In a similar vein, our sages teach us, "The wicked are called dead, even during their lifetime" (Talmud - Brachot 18b). In being wicked, they are ultimately separated from God, the source of all life. They are therefore considered dead, even while they are still walking and breathing. They may be alive in a physical sense, but in a spiritual sense, they are no longer among the living.

In Part 7, we'll examine why God allows for the possibility of evil.

One Drink Too Many: My Journey to Letting Go of Alcohol, Finding Freedom and Choosing Happiness
Take Two: Why Pesach Sheini is Significant to Our Family
Why Really Everyone Believes in Free Will
Who was Two-Gun Cohen?
Should Jews Support Ukraine?
The Jews of Cuba
Comments
MOST POPULAR IN Ideas
Our privacy policy