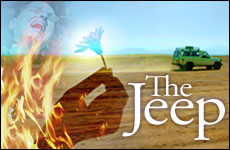 After terrorists murder a family member.

I am on a jeep trip with the kids at Camp Koby -- the camp we run in memory of our son Koby who was beaten to death at the age of 13, stoned by terrorists. It's before Passover and it's a reunion for children who have lost mothers or fathers or sisters or brothers to terror.

Bumping along dirt roads in a jeep isn't comfortable. And yet it can be great fun -- especially for the more than 300 kids at the camp who love being jostled about. I have taken this jeep trip before, from the Jordan River campsite to Lake Kinneret. Last time I sat in the back, where I held on to the metal bars of the jeep bed, struggling not to hit my head as we careened over juts and bumps in the road. But this time, the driver motions for me to join him in the front of the jeep.

You can't just sit in the car of life and drive through with the air conditioner on.

Nine eight-year-old boys are in the back. When I turn around, I see their bright eyes. One boy's 16-year-old sister, Shoshana Ben Yishai, was killed in a bus in Jerusalem on her way home from high school. Another boy's parents, Yaron and Efrat Unger, were driving to a wedding and were shot dead. He, a baby in a car seat, survived. Elia, their counselor, a strong slim young man with black curly ringlets, was stabbed 15 times in the chest by a Palestinian attacker.

As we ride, bumping along, I realize that a jeep ride is a metaphor for what it feels like to have a family member killed by terrorists. It is like being continuously jolted when before you used to have a smooth ride. Nothing can be taken for granted. You can't just sit in the car of life and drive through with the air conditioner on, oblivious to the rush of air and the friction and heat of the tires as they speed down the highway.

Some people in grief retreat not into a jeep but into a tank, armored against the world. They can no longer smell or touch the world rushing by them. They are hidden, protected, and suffocated at the same time, at risk of being cut off from the world around them.

One father we work with stays home in his dead son's room, unable to go to work. One teenage boy we know has refused to go to school since the death of his sister.

But there are pleasures in being in a jeep. You can go places that you can't go in a regular car. You can see the trees and plants more closely. You can have a fuller relationship to the world around you. Nothing is beyond your reach. The smells are so much closer -- the sweet tang of citrus and mango. We drive into streams and through orchards. And then we drive right into the edge of the lake which is fuller than it's been in years. The whole country depends on this lake for its water. We've been through many seasons of drought. Each year, people look at the receding waters of the Kinneret and mark how far the water has retreated, how much of the lake bed is exposed.

In Israel if there are not enough winter rains, you can't make it up. There is no rain in the spring and summer. But today, spring is in the air and there is a feeling of magisterial abundance, like the lake is overflowing. We drive right into the edge of the water and see the crowns of the trees in the water, almost covered. Just last year these were trees growing on the exposed lakebed. Now the trees are immersed in the lake and they may die because they won't be able to absorb the volume of water.

Grief needs to be absorbed into the body slowly and integrated, so that it transforms your being.

Suddenly I realize that when grief destroys a person it is because she can't absorb the magnitude of loss, can't find a way to take in the pain. Because grief is also something that needs to be absorbed into the body slowly and integrated, so that it transforms your being. In the process of mourning you become somebody else, somebody who now lives with loss as part of the fiber of your being.

IT'S NEVER THE SAME

I don't know the jeep driver but I tell him about my idea of the jeep as a metaphor for the rough ride those in loss -- like the kids in the back -- face. We begin to talk. Avi is wearing a baseball cap and sunglasses, and he takes off his sunglasses and looks at me and then turns back to the road. He tells me he is newly married, soon to have a first baby although he is almost 40 (old by Israeli standards). And then he tells me that his father was killed in the 1973 War when he was in fifth grade, and that his mother later remarried. He was about the same age when his father died as the kids in the back of the jeep.

"It's never the same," he says. He talks about missing his father all of his life and how his mother told him that sometimes she would get in the car and drive, 20 years after Avi's father was killed, just so that she could have a good cry. "The pain doesn't go away," he tells me. His mother was a professor who worked in the field of microbiology, studying the microorganisms that thrive in the Kinneret, invisible to the naked eye.

You can't see loss on these children's faces. But the truth is that this burden also carries within it a terrible beauty. Those who have mourned also have a hidden capacity, an ability to see and smell and feel so much more. Some of the trees immersed in the water will find a way not only to survive, but to branch out precisely from the place where they are injured.

But a person needs help to absorb the loss. Some people are like water, taking in the loss and hiding it in the depths of their beings. Water swallows everything brought to it, but it obscures what is submerged. Some absorb it like air, allowing people a hint of the fragrance of what they have undergone, but for the most part retreating from healing disclosure. And then there are those who absorb like the earth which is utterly changed by that which it encounters. When the earth absorbs, it sometimes brings forth crops like the ones we are passing, a field of wheat that is just now being threshed.

At the end of the jeep trip we pull over and some of the boys get out to say the special prayer for the month of Nissan, said upon seeing the first blossoms of the fruit trees. After the deep freeze of winter, when it seems that all life and growth is dormant and that everything has died, we say a prayer at seeing the first signs of spring:

"Blessed are you God, King of the universe, for nothing is lacking in the world that you created -- good creatures and good trees, in which people can take pleasure."

As the trees need to absorb the water and nutrients from the ground in order to grow, we too have the possibility of absorbing our pain so that it will one day blossom into something we haven't yet imagined. What seems so dormant -- our love, our hope, our capacity for living -- can one day be renewed.

Through the Eyes of a Soldier
Were Adam and Eve Jewish?
How I Learned to Love the Multiverse
10 Big Jewish Inventions
Comments