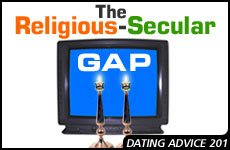 Can a secular Jew and a religious Jew find lifetime bliss together?

My question isn't about intermarriage between a Jew and non-Jew. Rather it is about the problems I am facing as a secular Jew who is engaged to a man who is observant.

My fiancé began to keep Shabbat and kosher about two years ago. I come from a Russian Jewish family who passed strong Jewish values and traditions along to me, and we have strong connection to Israel.

So now we are getting married, but the issue of religion has become amplified during the past few weeks. I believe that my fiancé was under the assumption that I would "come around" and become religious at some point. It is not that I am unwilling to grow into more aspects of Judaism. But my level of comfort is somewhere around conservative.

My question is whether there is a way to meet in the middle. It seems like I can't discuss this with anyone. If I speak to a rabbi, he will advise me to become more religious. If I speak to someone who isn't religious at all, they will tell me to do what I believe. I don't want to have all of the aspects of an observant lifestyle, such as the way my fiancé wants to observe Shabbat. I have no problem with him observing these traditions, but I do not feel they should be imposed on me.

At this point I am stuck on how to proceed. Any suggestions?

We're glad that you wrote us and hope that we can be helpful to you. But we aren't the only address for you to turn to for advice. Many rabbis and Jewish educators, particularly those who work in Jewish outreach, have experience with situations similar to yours. They understand that each individual needs to connect with Judaism at his or her own pace, and will not advise you to do something you are not ready to undertake.

Compatible goals and values are one of the vital foundations of a long-term marriage. Your letter describes many basic Jewish values that you and your fiancé have in common. Being Jewish is very important to both of you, and you both have a strong Jewish identity. Both of you want to marry Jews and to raise children who are strongly aware of their Jewishness. You are both connected to Israel. We expect that for both of you, your sense of right and wrong, the importance of family, the emphasis on helping others, and your overall view of life are heavily influenced by Judaism.

Although you share many basic Jewish values, the next question is how compatible each of you can be with the differences between you. Your fiancé's decision to become more religiously observant, and your desire to stay at a place in which you are comfortable, will be a serious challenge.

There are two basic principles of accommodation that we feel are non-negotiable. The first is that the more observant partner should not be pressured to lessen or compromise his or her level of commitment to Jewish observance. This is because the observant party cannot philosophically compromise on a value that he holds as absolute. For example, your fiancé may say that he cannot eat with a group of friends at a non-kosher restaurant -- not because he prefers not to, but rather because he cannot, due to immutable Torah laws.

Beyond this, at the end of the day, squelching one's spiritual yearnings is not something a human being can endure indefinitely, and it will inevitably lead to bitter resentment.

The second principle is that the couple must agree on the standards of observance that will be maintained in their home, and on the way their children will be raised and educated.

How does this work on a practical level? If one partner keeps Shabbat, he will surely want Shabbat candles lit, to have Shabbat meals as a family, to use electric timers to control lights, and to attend synagogue and study Torah. Even though each partner can be free to enjoy the rest of Shabbat as he or she pleases, the couple will have to deal with their differences when children enter the picture.

This is but one example, and there are many others. Another significant issue involves the Jewish laws of family purity, which your fiancé will undoubtedly want to follow. This aspect of married life requires the participation of both partners.

It is important to understand that for an observant Jew, Judaism is much more than a set of traditions and that the differences between the two of you are probably more than just practical considerations. Belief in God as the author of the Torah shapes one's entire set of values and beliefs -- and impacts how one shapes the home, raises children, and makes personal decisions in life.

You might view the idea of making accommodations in these areas as creating a situation in which you will have to make more adjustments than your fiancé. That's always true for the less observant partner. However, your fiancé will also be making compromises.

Since you are open to the idea of growing Jewishly yourself, you have probably considered that while you do not feel as religiously committed as your fiancé, if the two of you agree to make accommodations you may gradually acquire more of an appreciation for Jewish observance and may grow spiritually in other ways as well. We have seen this happen many times. However, your fiancé cannot "expect" this to happen or be angry with you if it does not, or if you do not grow as much as he would like you to do so.

At the same time, you must also consider the possibility that over time, your fiancé may continue to grow in Jewish observance. Can you each be comfortable with that possibility?

Of course, every marriage requires compromise and adjustment. Even happily married spouses will change in many areas over the course of a marriage, often at different rates. When a husband and wife are flexible people, they usually are able to adjust to each other's changes, so that they can give each other encouragement and support and maintain a loving and enriching marriage.

We are personally acquainted with married couples who have had successful, long-term unions, notwithstanding the fact that they are at different points on the spectrum of Jewish observance. We have also observed other couples who chose not to remain married, because they could not resolve the difficulties that this situation presents.

Nevertheless, we see a difference between a couple who is already married and struggles to accommodate differences in religious observance that develop during their marriage, and a couple who has significantly different levels of observance and is planning to marry. A married couple has an existing commitment to try to adapt to the changes each wants to make to the route they have been traveling together.

However, for those who are not yet married, we question the wisdom of embarking on a journey when each will be following a significantly different roadmap. Marriage is difficult enough, with its unforeseen challenges, and you don't want to enter this permanent relationship if you cannot travel a good part of the way together.

The bottom line is that both of you need to consider objectively if you are headed in the same direction, even if your ultimate destinations on that path are different or may change.

It seems that you and your fiancé have a lot of serious talking to do. We suggest that you locate a local rabbi who is involved in Jewish outreach in your city, for some suggestions about how to proceed. There is a list of Aish branches at http://www.aish.com/aishint/branches.asp.

We hope this helps you find a way to either balance your differences, or to have the strength to move on if you are unable to do so.

Dating Maze #377: Too Much Information?