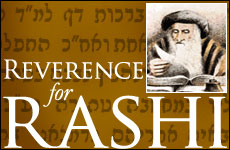 Celebrating the 900th anniversary of the passing of Rashi.

Rabbis and Jewish public figures, French politicians and spiritual leaders, and scholars from all over the world gathered in the Troyes City Hall to mark 900 years since the passing of Rashi. France does not forget her past, or her remarkable historic figures. Rashi is revered not only in every Jewish home around the globe; he also left a rich legacy for the French people in his descriptions of ancient customs and lifestyles. Most valuable of all to them, he preserved the ancient roots of the French language, in the form of 3,000 translations of terms that he presented in his interpretations.

This wasn't just another multi-denominational gathering with the goal of bridging gaps and fostering relationships. The purpose of this convention was to discuss the great legacy of Rashi, Rabbeinu Shlomo Yitzchaki, the great commentator, revered by the entire Jewish people.

This convention, which took place over several days, was one of many government-funded and organized activities, including issuance of a half-euro stamp to commemorate the occasion.

HIS LIFE, AND THE ROOTS OF ANCIENT FRENCH

Born in France, Rashi lived most of his life in Troyes, in the province of Champagne, except for a few years learning in Worms, Germany. His sons-in-law, grandsons, and many students lived in small villages throughout the province or not far outside it, such as Orlean, Dijon, and Romereau, home of his grandson, Rabbeinu Tam. Just as Babylon was the center of Torah learning during the period of the Talmudic sages, so the Champagne district in France was the great world center of Torah study in its time. In this region of France, famous for its choice wine grapes, the seeds for the most widely accepted commentaries of the Tanach and Talmud were planted.

The only person who recorded customs from that time, whose records have survived, was Rashi.

There are no physical remnants to remind us of that glorious era in history. All of the signs and traces of that time have been obliterated by the Crusades, wars, revolutions, and political upheavals that characterized the last 900 years of French history. The French have no documentation from that period, describing life in their country or the customs of their people. The only person who recorded customs from that time, whose records have survived, was Rashi.

Rashi, whose commentaries are interspersed with descriptions of lifestyles and common French practices and occurrences during his lifetime, is one of the most reliable and researched resources for French historians. Strange as it may seem, the writings of this lone Jewish scholar are the basis for all studies of ancient French customs and culture, especially in the Champagne district.

Even more significant is Rashi's contribution to the study of the ancient French language. The 3,000 translations and explanations of terms that he recorded shed light on the ancient dialect and grammar of ancient France, which few scholars are able to understand today. Modern French language is very different from the French that was spoken in Rashi's time. The collection of words that Rashi has recorded, known to us as loazei Rashi, is a veritable gold mine for linguistics scholars studying the transformations which the French language underwent.

"Rashi is the only source available to French scholars who are trying to decipher ancient French writings," says Rabbi Avraham Meir Glantzer, a renowned expert on loazei Rashi. "The fact that Rashi translated and transliterated those words into Hebrew helps researchers not only to understand the literal meaning of terms, but the exact way they were pronounced. That is what the French researchers find so enchanting about his work. "Rashi," continues Glantzer, "is automatically included in almost every dictionary of Ancient French."

There is yet a third reason why Rashi is so appreciated, according to a theory presented by Rabbi Yoseph Pevzner: "The French value Rashi as one of the greatest commentators of the Jewish nation, and admire him for the great impression he has made on the scholarly world. He is recognized as an upright and moral personality of the highest degree, and as having been a rare and remarkable scholar in his time. They recognize that Rashi possessed a wealth of general knowledge, apparent everywhere throughout his writings."

"The French view Rashi as one of the most influential personalities of his time," concludes Rabbi Shmuel Sirat, former chief rabbi of France and founder of the Rashi Center, Mercaz Rashi.

For all of these reasons, the French decided to commemorate Rashi in a grand ceremony to mark 900 years since his passing on the 29th of Tammuz, 4865. Varied events were planned to honor his memory: ceremonies, symposia, and the production of a stamp depicting Rashi against the background of a vineyard in Champagne, with letters pouring out of his book onto the grapevines. This alludes to Rashi's family occupation, according to some sources, as vintners.

The events concluded with two grand conventions: one in Rashi's own town, Troyes, and the other, sponsored by President Chirac, in Paris. In the end, Chirac was unable to attend. According to Rabbi Sirat, he was occupied with the voting for the European Constitution and with internal political troubles. Rabbi Pevzner, on the other hand, mentions conflicting interests in the government that prevented the president's participation. Still, the event, well-planned and inspiring, received lavish publicity, and many prominent figures were there, as President Chirac's guests.

Rabbi Glantzer, who lectured on the topic of loazei Rashi at the convention, reports that "Professors from all over the world attended. And senior political officials, such as the mayor of Troyes and Mr. Francois Barouin, Overseas Minister in Chirac's new government. Muslim professors came, too, including the president of the University of Morocco. Everyone spoke about the major contributions Rashi has made, for the Jews and for the world at large."

"The Moroccan professor spoke about the translations that Rashi brought back from Arabic. And of course about what a great scholar Rashi was, in general."

Troyes has long considered Rashi to be a major tourist attraction, virtually the town's symbol. Indeed, Troyes' name has become so well-known, in Rashi's merit, that the United Nations cultural committee is considering granting the town the status of a historical city. This would bring a large inflow of cash for preserving and renovating the city's historical sites.

There is a monument to Rashi in Troyes, half white, half black, with Hebrew letters carved straight through, leaving open spaces through which laser rays formed by the letters shine out, spelling the name Troyes. This interesting design, created by a famous French artist, transmits the clear message that Rashi's legacy has illuminated the name of Troyes throughout the world. The laser rays, the most attractive aspect of the monument, have been removed, however, following protests that the lights would confuse over-flying planes.

Though months ago, the city began making plans for a spectacular ceremony, with the assistance of a skillful artist who took upon himself the bulk of the work, "What happened is unbelievable," says Rabbi Pevzner. "Three days before the event, the artist died, and that ceremony was cancelled."

Rashi's gravesite is not in Troyes. Some say he was buried in Worms. "Yet, thousands of tourists come to Troyes every year, hoping to see some physical sign of Rashi's existence, or at least to inhale some ancient air. It's very moving to witness their enthusiasm, year after year," says Rabbi Shaul Sultan, director of the city's Rashi Center, which serves as a research center for a prominent university, and focuses solely on research about Rashi: his biography, his era, his teachings. Most of the hundreds of students doing research at the center are not Jewish.

"Though we have no grave, Rashi himself is buried deep in the heart of each and every Jew."

"Some of them are Bible scholars, interested in Rashi's commentaries," explains Rabbi Sultan. "They want to know Rashi's opinions on a variety of subjects. Devout Christians come in here, who know Tanach cover to cover; they sit reading Rashi's commentaries and are amazed. Then there are many others who were already ardent devotees of Rashi before they came to the center, and who want to learn more and more. Finally, there are researchers investigating the roots of the French language who, in the course of their studies, meet up with Rashi.

"The center is earning a good name for itself, to the point where other cities want to open their own branches," says Sultan proudly. A similar center already exists in Paris.

Unfortunately, the Rashi Center is the only sign of past or present Jewish life in Troyes. All other remnants of the once vibrant Jewish community have disappeared. The few Jews who still live in Troyes are aging, and their numbers are dwindling. "The young people all move to larger cities, such as Paris, and the community is breaking apart at an alarming rate. We have a minyan only on Shabbos now," says Rabbi Sultan.

The Troyes city library has set up a fascinating exhibition on Rashi's life and major works. Books with examples of Rashi's teachings are on display -- none of Rashi's original manuscripts have ever been discovered.

"Though we have no grave," says Rabbi Sirat, "Rashi himself is buried deep in the heart of each and every Jew.

We can Control our Thoughts

Doing Things That You Don't Yet Feel Comfortable Doing

What to Do When You’re STUCK
Dr. Sheila Nazarian’s Escape from Iran
The Miami Boys Choir is Taking over TikTok
Caramelized Onion and Pumpkin Pirozhki
Comments
MOST POPULAR IN Uncategorized
Our privacy policy
Aish.com Is Looking for Great Writers