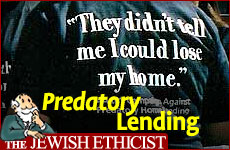 Mortgage lenders are entitled to protection from sudden foreclosure.

Q: I've heard the great sub-prime crisis was caused by predatory lending practices. Is it wrong for banks to lend to high credit-risk homebuyers?

A: The so-called "subprime crisis" resulted when many mortgage defaults occurred within a short time. The borrowers on these mortgages were individuals with bad credit risks. Historically such individuals could not easily obtain mortgages, but a combination of new financial instruments (mortgage securities) and a rising housing market gave banks the confidence to lend to such people.

I certainly don't think it was unethical of the banks to extend credit to these individuals. One of the main criticisms of banks in the past has been that they deny credit to people who really need it. The saying was that the only people who can get loans are the people who don't need them. In Jewish tradition it is a special mitzvah to lend to needy individuals (without interest). In fact the verse which commands us to provide for the needy individual "enough for whatever he lacks" (Deuteronomy 15:8) specifically refers to lending money, not giving charity.

Some accusations have been made that the banks gave credit on terms that were likely to lead to default and repossession. I can't comment on these accusations, and I have seen no convincing evidence so far. But it is worthwhile to see how Jewish tradition deals with the ethical dilemma involved in the decision to extend credit when there is a good chance that it will result in repossession.

One who lent money against [the collateral of] his field, and said to him: "If you don't pay me within three years, it becomes mine", it becomes his. (1)

The commentators understand that this refers even to the case where the field is worth less than the loan. In this case, the lender has an interest in default, enabling him to take possession of the valuable field. Perhaps he would like to tempt the borrower into taking the loan! Yet from the mishna it seems that there is no problem lending money when foreclosure (seizure) is an evident consideration in the eye of the lender, and not merely a last resort in case of default.

However, the subsequent discussion in the Talmud concludes that at least in the case where the field is worth more than the loan, such an agreement is an "asmachta". Asmachta is a legal expression meaning that a person doesn't have true "informed consent" to an agreement, because he doesn't properly understand the risks involved. For example, a hustler's gambling winnings may be considered asmachta. (2)

So such a deal is void, unless it is originally drawn up in a way which draws attention to the risks involved.

Another type of protection provided by Jewish law is the right of redemption. Even after the property has been repossessed, the borrower has the right to buy it back if he obtains the money. (Such a right exists in many jurisdictions today as well.) The Talmud teaches:

The power of redemption is originally conceived not as a right of the borrower, but rather as an ethical obligation of the repossessor. One result in defining the law this way is that there are certain equitable exceptions to the law. After all, it doesn't make sense to compel the "right and the good" of the borrower at the expense of the right and the good of the lender.

To sum up: I have seen no evidence that sub-prime lenders were in any way scheming to foreclose. However, the whole crisis has brought public attention to the foreclosure process and possible inequities in it. Jewish law includes a number of safeguards against predatory lending practices, including a demand for truly informed consent to lopsided foreclosure conditions, and a right of redemption for someone who has lost his house.

The Jewish Ethicist: How Far is Wall Street from Las Vegas Boulevard?

The Jewish Ethicist: Paying for Bad Service
For Every Individual, A Torah Scroll
Allegiance To The Monarch
Meet the Real You: Yom Kippur
Comments
MOST POPULAR IN Current Issues
Our privacy policy
Aish.com Is Looking for Great Writers