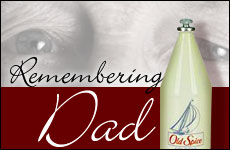 Living with Dad wasn't always easy, but it was easy to forgive him. He faced major professional disappointments and the most painful kind of personal tragedy. How could I judge him?

When I was growing up, my father was always sure to get a gift on Father's
Day. And I do mean "a gift:" Each year, we presented him with a new bottle
of Old Spice aftershave. After all, he already had season tickets to the
UCLA Bruin basketball and football games. He was not on intimate terms
with wrenches, pliers, or other home-repair gadgets. He didn't hunt, fish,
or engage in other, similar guy hobbies. The Old Spice seemed unutterably
unimaginative, year in and year out, but we learned not to tinker with
success.


One year we daringly ventured into uncharted gift territory and gave him a
new fragrance. But Dad, who would have been a terrible poker player, could
only feign pleasure. After spraying a bit on the back of his hand and then
taking a whiff, he wrinkled his nose in a way that spoke volumes. All he
really wanted was another bottle of Old Spice.

Dad's life wasn't easy. Born with a severe hearing deficit, he went
through life struggling to catch the conversations around him. His hearing
aid often whistled inconveniently (such as during movies) and could only
partially compensate for his missing hearing. This handicap greatly
limited his career options and his income. Many people, including,
sometimes, his own family members, lacked the patience to speak slowly so
that Dad could read their lips. It was a frustrating way to live. Yet
sometimes, if we said things in Dad's presence that we were sure he
couldn't hear, he'd whip around and say, "I heard that! I can hear when I
want to!" I suppose we all hear selectively from time to time.

But Dad was blessed in many ways as well. When he was 21, he met my mother
at a summer camp where both were counselors. Dad was a lifeguard, fit,
tanned and handsome. Mom was a gorgeous 16-year-old who looked stunningly
like Elizabeth Taylor. Naturally, Mom's parents insisted that Dad wasn't
good enough for their girl, but two years later, in 1947, they walked Mom
down the aisle. I still have the ceramic bride and groom that sat atop my
parents' wedding cake. These days they make them out of plastic.

Nothing was more important to Dad than my mother and their children.
Nothing shook his adoration or his passion for her, despite many rocky
years during which family illness, financial woes, and even tragedy
struck. After more than 40 years of marriage, Mom, a natural brunette,
lightened her hair to a burnt honey. It was beautiful. But Dad -- the man
who never wanted anything other than Old Spice for Father's Day --
protested this change in Mom's looks.

"When I married you your hair was dark brown!" Dad argued.

"When I married you, you had hair!" retorted Mom, ending the discussion.

Life as we knew it, with its veneer of safety, ended forever that day.

Mom and Dad raised their children during times of enormous cultural
upheaval. Like so many parents who had grown up in simpler times, they
didn't like much of what was happening in society, but were powerless to
stop the unwelcome changes. They also worried terribly that my older
brother would get drafted into the Vietnam War. As a young child, I
listened to discussions around the table when my parents, aunt and
grandparents tried to reassure themselves that Allan's draft number was
low, decreasing his odds of being drafted. In fact, Allan didn't get
called. But while driving to visit our grandmother on her birthday in
March 1970, his car careened off a cliff, and he died. Life as we knew it,
with its veneer of safety, ended forever that day.

Over the next many years, Dad's pain was almost unbearable to watch. Mom's
pain, no less acute, remained in a deeper, closed place. Her job was to
keep the family together, despite her anguish, and that's what she did.
There is no such thing as "normal" life after a tragedy of this magnitude,
but somehow, one puts one foot in front of the other and forges ahead.
Dad's love for Mom, my sister and me continued limitlessly, but something
in him died on the day that he lost his firstborn and only son. His eyes
bore the pain, and even years later, he often looked a little bewildered,
as if he still could not believe that this horrendous tragedy had been
visited upon him.

After my husband and I married, Dad expressed concern about our rapid
family expansion. We had three sons in little more than four years. Didn't
we think that was enough? But when Dad was diagnosed with cancer, he had a
change of heart. One day, while Mom and I sat at his bedside in the
hospital, Dad shocked me by declaring that he had given the matter a lot
of thought and realized how nice it would be if I had a little girl. Not
only that, he already had selected names for us, including his all-time
favorite girl's name, Muriel. Mom and I laughed out loud. There were
precious few Muriels on the playground in the 1990s. The 1890s, probably,
but not the 1990s.

I remained deeply struck by Dad's talk of my having a daughter because it
was so completely out of character. Although I was convinced that Dad was
angry at God and had been for many years, I wondered if the Almighty was
compensating Dad for his weakening physical condition with some kind of
spiritual insight. A few months later, I learned that I was expecting
again. And exactly 48 hours later, on the Friday before Father's Day, Dad
passed away.

Dad's hope came true; we were blessed with a daughter. We did not name her
Muriel. Instead, as is the Jewish custom, we chose to memorialize Dad with
a name that began with the first letter of his Hebrew name. I'm fairly
hopeful that he forgave us.

Raising our children now, my husband and I share our own parents' alarm at
the continued slipping away of certain bedrock values in society. To
borrow a phrase from the 1960s, we feel that these changes are harmful to
children and other living things. If Dad were alive today, he'd be
disgusted that a TV model of fatherhood morphed from Ozzie Nelson to Ozzie
Osbourne. How did this happen?

On Father's Day, after opening his aftershave, Dad loved to read his cards
aloud. He read each card, even the hokey ones, with the fervor and
seriousness of a Shakespearian sonnet. When I was grown, I stopped giving
store-bought cards and wrote my own personal notes to Dad, trying to
convey my appreciation for all his love and support over the years. Living
with Dad wasn't always easy, but it was easy to forgive him for the rough
patches. He faced major professional disappointments and the most painful
kind of personal tragedy. How could I judge him?

Of course, Dad lives on through me and my children. Funny little
characteristics have wended their way through the gene pool: One of my
kids loves to read his birthday cards aloud. Another has Dad's exact
coloring; another his nose. A few, I'm happy to see, share his love of
people and genuine happiness at making new friends. And one of his
grandsons has recently discovered a new favorite fragrance of aftershave.
It's called Old Spice.