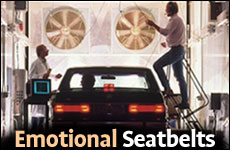 On the road of life, don't become a crash test dummy.

"Please put on your seat belts kids," I said to my five-year-old daughter and her friend. "We have to hurry up and get going." It was a standard directive from an adult to a child and I had every expectation of immediate compliance.

"I don't want to wear a seatbelt," the friend said.

I hadn't eaten anything all day. I hadn't slept more than a few hours the night before, it was boiling hot out and I was running very, very late. I loosened my collar. This was not supposed to be happening now.

"It's very dangerous," I said with as much calm as I could muster. "If we have to stop short, you could God forbid go flying. Now please put on your seat belt."

She looked thoughtful for a moment and then said, "If we stop short, I'll just hold on to the seat."

An ingenious sidestep on her part but I wasn't in the mood for mental jousting. I could hear the clock ticking in my ears.

Why I wasn't listening to the little voice in my head that kept telling me to stop arguing with a five-year-old I'm not sure, but she certainly wasn't about to be the mature one to gracefully bow out of the conflict.

"Well if we're going faster," she said, "I'll just hold on tighter!" Then she stuck her tongue out at me.

I raised my voice to its meanest, most domineering decibel and invoked the "You get your seatbelt on right this instant young lady," clause.

Well that was it. The cool was officially lost. Without any consideration for the long-term consequences of my actions, I raised my voice to its meanest, most domineering decibel and invoked the "You-get-your-seatbelt-on-right-this-instant-young-lady" clause of the adult's unwritten guidebook to demeaning childish behavior.

It worked, sort of. But I knew it was bad. The Torah says we're not supposed to get angry. It's like idol worship. Yet I had completely lost my cool. I felt... well, like a big dummy.

It wasn't until that night while I was mentally reviewing the day's events that I realized how the entire episode provided a wonderful lesson on the subject of anger management.

Like everyone else on earth, this had not been the first time in my life that I had felt or expressed anger. I thought back to the High Holidays. During those solemn moments of introspection, I had felt genuine regret and committed to work harder at controlling my anger. At the time I thought I had done teshuva (repentance) and that the book was officially closed on my past mistakes.

"Think again, buddy," reality had said to me today. And so thinking again is exactly what I did.

Just deciding to try harder to control my anger was exactly like what my daughter's friend had said to me: "If we're going faster, then I'll just hold on tighter!"

When you are going at top speed towards what you desire and reality is standing like a brick wall in your way, it is simply not enough to say, "Well I'll just hold on real tight and I won't fly through the windshield!" Logically we know it doesn't work like that. What this particular situation requires instead is forethought -- the invention of the emotional seatbelt which will help keep us safe on the spiritual highway of life.

With that new awareness in mind, I mentally reviewed the incident. It occurred to me that there had been several factors contributing to my irritation. I had been tired, hungry, hot, in a terrible rush, and caught completely by surprise (recall that I had had "every expectation of immediate compliance"). True these factors are often unavoidable, but not always. I decided that a little thought before what I can reasonably anticipate to be a tense situation might go a long way. It wasn't a foolproof solution, but then the seatbelt is also not foolproof. Still, it has saved countless lives.

Like a warrior girding himself for battle, I geared myself up for the inevitable showdown. I slept eight hours the night before. I ate a full meal and, just in case, put a snack in each pocket. I carried a portable fan with me, rehearsed what might happen in my mind and made sure to leave at least ten minutes early.

"Sure Mr. Magram," the friend said, smiling as she clicked the seatbelt closed. "You see I've been thinking and, well -- I think you're right about this seatbelt stuff."

"Good for you," I said smiling as we pulled away. "Good for us all."

Don't Wait to be a Hero