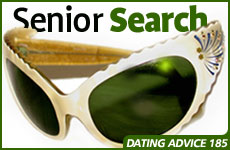 Can an octogenarian find her soul mate?

Your focus is on the younger generation, but there is a huge population of widows, widowers, divorcees, etc. that is considerably older, but living longer and living well. My friend lost two husbands and is really eager to find another partner. She is 80 years old, but you would never know by her appearance and demeanor. She's as sparky as they come, great sense of humor and extremely intelligent.

I am a young 75. I was married at 18, and divorced him 20 years ago after suffering from his dysfunction. After the divorce, everyone was telling their single friends to call me, which they did. I went out with some for lunch, a chat, etc. -- a different date almost every day. The phone kept ringing and I was meeting all of the men you would never find at a singles event.

Yet I never found one of them with whom I could feel an emotional connection -- possibly because of my negative experience with marriage that I feared to repeat. But they liked perusing me and I was very popular. But that got old. When they wanted to get married and I didn't, they got the message.

So I went to work for 20 years and it was the most self-empowering thing I could do -- finding something I knew I was doing with excellence and generating a good income.

Now after Wife and Motherhood, Dating Dolly, and Business Wonder Woman, what's next? I would truly like a marriage companion to share my beach home, travel opportunities, theater, etc. -- but how do I find him? Not online. The older men only want young women. And if the guy is much younger, I often suspect he is interested in the financial benefits of my lifestyle.

I would like to have some one show up who "knocks my socks off," but realistically don't see that in the cards. So please tell us "senior but interesting" ladies what to do. There are thousands of us waiting for advice.

You seem to be a woman with a lot of admirable qualities -- who had the strength to leave a bad marriage with a spouse who would not get the help he needed, and went on to become a successful businesswoman and build a good life for herself. You demonstrated a great deal of flexibility, and now that you are looking for someone to share the rest of your life with, you'll have to re-orient yourself once again. Yet in fact, the process for someone who is in her senior years isn't much different than for a much younger single.

The main difference is the population. There simply are considerably fewer men this time around. Nevertheless, there are some pretty great guys who are also looking for marriage. The secret to finding them is through extensive networking, as well as by getting involved in projects and programs that can enrich your life -- and at the same time either help you meet someone or meet new people who can become part of your network. By the way, that's the same advice we give singles in their late 20s, 30s and 40s -- the only difference is that as you get older, the more networking you may have to do.

We can see that you know how to network -- it was one of the ways you were able to date extensively when you were younger. Some of those friends may no longer be with us now, so you may have to make a bigger effort to meet new people who can be helpful, but that will have an added benefit of bringing some new people into your social circle.

Since you now want more than just "someone with whom to spend a few pleasant hours," we recommend that you pre-screen the people who have been suggested to you. Don't date anyone simply because he's "over age 68 and available." Try to find out if he is looking for someone like you, and if he has similar ideas about the way he would like to spend his life.

If you are worried about meeting an opportunist, it's important to talk to someone who has known him a long time and can vouch for his integrity. Of course, if you are fortunate to meet a man with whom you will share your life, you will nevertheless have to protect your assets. A family lawyer can help you understand how to structure your finances so that each of you retain the assets you acquired earlier in your lives, no matter what happens to the other (or to your relationship), and can insure that your assets will eventually pass to your heirs.

We believe that the greatest difficulty you will face is being able to build a relationship with someone. Your letter is very insightful -- your are probably correct in surmising that the reason you only dated for enjoyment in the years following your divorce was that you were emotionally scarred by your first marriage. Even though you went on to enjoy a full and rewarding life, those scars are probably still present. They definitely blocked you in the past, even though at the time you may not have realized this. It could be you need a short amount of therapy to be able to move past this block.