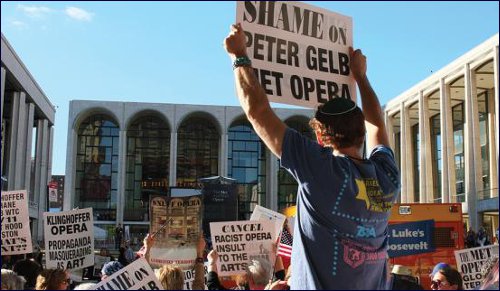 The death of Leon Klinghoffer cannot be explained away.

The Death of Klinghoffer, the controversial, anti-Semitic opera had its opening performance at the Metropolitan Opera of New York yesterday. It sparked large protests, including 100 wheelchairs, objecting to its cynical depiction of the murdered, wheelchair-bound Klinghoffer.

The opera purports to depict the brutal 1985 murder of Leon Klinghoffer, the disabled Jewish American tourist who was shot and dumped into the sea by PLO terrorists who hijacked the cruise ship on which he and his wife were taking a special trip to Israel for their 36th wedding anniversary. But instead of showing the brutal killing of a defenseless old man by terrorists, the opera takes a strange turn, positing both Leon Klinghoffer and his murderers as moral equivalents, each representing an equally valid world view.

It opens with a wholly-invented scene of Jews brutally killing defenseless Palestinian women and children – and then goes downhill from there. Jews are depicted as bloodthirsty and venal, willing to exploit others for their own gain, break the law, and attack other people. An initial “comic” scene in the original opera depicted the Klinghoffer’s friends as thoughtless buffoons, and proved so nauseating to theatre-goers it was quickly scrubbed from all future productions. In contrast, the PLO terrorists who killed Klinghoffer are portrayed as more complex and even noble, singing at one point “we are soldiers fighting a war – we are not criminals, we are not vandals – we are men of ideals.”

The Death of Klinghoffer was written by American composer John Adams, with a libretto by Alice Goodman, and both artists clearly had strong agendas as they worked on the piece.

One of Mr. Adams’ aims in writing the opera was to teach Americans to be more nuanced in their approach to terrorism. He wanted to teach audiences that terrorism could be understood instead of condemned.

While she worked on the opera, Ms. Goodman abandoned Judaism altogether, converting to Christianity; today she is a Church of England vicar.

Given its offensive nature, The Death of Klinghoffer has rarely been performed. After its 1991 debut, opera companies the world over avoided it like the plague. It enjoyed a modest revival in 2001, when it was performed in Finland, and the Boston Symphony Orchestra planned to play extracts later that year. After the terror attacks of September 11, however, that plan was quickly abandoned.

Why would the Met perform this toxic work?

Some critics praise the opera’s music. Many opera fans undoubtedly feel they have a right to listen to its music, even if the opera is in bad taste. But these fans should realize that The Death of Klinghoffer isn’t an abstract piece of theatre: it goes a long way towards excusing the murder of a helpless American Jew, and its performance today runs the very real risk of exacerbating Jew-hatred around the world.

The Met’s Director Peter Gelb has written the opera’s goal is “to understand the hijackers and their motivations, and to look for humanity in the terrorists.” Whereas for most opera-goers that sounds repugnant, for Mr. Gelb and some others, it undoubtedly sounds avant-garde and modern: offering an alternative world-view that is seductive in upsetting conventional mores.

But even he has realized the danger of this opera. Plans to offer live simulcasts of the opera in European venues were scrapped after a sharp rise in anti-Semitism there. The Met admitted there was danger the opera could “stir up anti-Israel sentiments” and be “a vehicle to promote anti-Semitism”: the simulcasts were cancelled

In a poignant statement that the Met agreed to include in the opera’s playbill, Ilsa and Lisa Klinghoffer, Leon Klinghoffer’s daughters, explained the opera’s dangers: “We are strong supporters of the arts, and believe that theatre and music can play a critical role in examining and understanding significant world events” they wrote, but “The Death of Klinghoffer does no such thing…it rationalizes, romanticizes and legitimates the terrorist murder of our father.”

As the Met’s live performances went ahead, outraged New Yorkers protested the work.

Rudolph Giuliani took the lead in leading protests outside Lincoln Center. “If you listen, you will see that the emotional context of the opera truly romanticizes the terrorists,” he said.

As protestors outside sat in wheelchairs holding signs saying “I am Leon Klinghoffer,” inside Lincoln Center, the opera was repeatedly disrupted by outraged ticket holders. “Shame on you!” cried audience members as the conductor took up his baton. After a particularly offensive chorus, many members of the audience booed. At the conclusion of the hijacking scene, one member of the audience declared “The death of Leon Klinghoffer will never be forgiven!” – and was quickly arrested. The opera was delayed and stopped several times; singers and members of the orchestra paused each time until the outraged boos and comments died down.

In 2001, after the Sept. 11 terror attacks, then Mayor Giuliani was offered $10 million in disaster relief from Saudi Prince Alwaleed bin Talal – on condition that he advocate a more “balanced” view of the Palestinian cause. Guiliani’s answer was clear: “There is no moral equivalent for this act. There is no justification for it,” he said, “And one of the reasons I think this happened is because people were engaged in moral equivalency in not understanding the difference between liberal democracies like the United States, like Israel, and terrorist states and those who condone terrorism. So I think not only are those statements wrong, they’re part of the problem.”

Rudolph Giuliani – like many of his fellow New Yorkers and supporters of Israel – realized what those who backed The Death of Klinghoffer didn’t: moral equivalence is dangerous. It erodes our knowledge of what is good and right and enables us to rationalize the unthinkable. Back in 2001, Giuliani turned down the prince’s offer. Today, we can stand similarly firm and say, like the protests at Lincoln Center, no to terror; no to moral equivalence. The death of Leon Klinghoffer cannot be explained away.

In joining protesters of the New York Metropolitan Opera's production of "The Death of Klinghoffer," I echo the silenced voice of our son, Daniel Pearl, and the silenced voices of other victims of terror who were murdered, maimed or left heartbroken by the new menace of our generation, a savagery that the Met has decided to elevate to a normative, two-sided status worthy of artistic expression.

We are told that the composer tried to understand the hijackers, their motivations and their grievances.

I submit that there has never been a crime in human history lacking grievance and motivation. The 9/11 lunatics had profound motivations, and the murderers of our son, Daniel Pearl, had very compelling "grievances."

In the last few weeks we have seen with our own eyes that Hamas and the Islamic State have grievances, too. There is nothing more enticing to a would-be terrorist than the prospect of broadcasting his "grievances" in Lincoln Center, the icon of American culture.

Yet civilized society has learned to protect itself by codifying right from wrong, separating the holy from the profane, distinguishing that which deserves the sound of orchestras from that which commands our unconditional revulsion. The Met has trashed this distinction and thus betrayed its contract with society.

I submit that choreographing a "nuanced" operatic drama around criminal pathology is not an artistic prerogative, but a blatant betrayal of public trust. We do not stage "nuanced" operas for rapists and child molesters, and we do not compose symphonies for penetrating the minds of ISIS executioners.

Some coins do not have two sides. And what was done to Leon Klinghoffer has no other side.

This opera is not about the mentality of deranged terrorists, but about the judgment of our arts directors. The Metropolitan Opera has squandered humanity's greatest treasure: our moral compass, our sense of right and wrong, and, most sadly, our reverence for music as a noble expression of the human spirit.

We might someday be able to forgive the Met for decriminalizing brutality, but we will never forgive it for poisoning our music, for turning our best violins and our iconic concert halls into megaphones for excusing evil.

Escape from My Hamas Captors

The Pro-Palestinian's Real Agenda
What Makes Eli Run?
The Tyranny of Materialism
Science Enters the Mysterious Inner World of Consciousness
Comments
MOST POPULAR IN Israel
Our privacy policy