Truths my Father Taught me 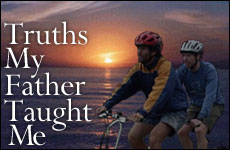 "Look, a two-headed bike!" said a kid passing by. This confirmed for me that Dad and I, on our tandem bicycle, were invincible.

Riding on the two-seated bicycle with Dad, I didn't think about being blind. I did what everybody else did on the back seat of a tandem: no steering, just pedaling.

It was a late spring day in my quiet small hometown of Bradley Beach, New Jersey. For the first time since the previous summer, there was enough light left for a bike trip after supper.

We began our ride by turning east, towards the boardwalk. The sun, seeming to grow more fiery as it set, swung around my cheek. Dad described to me the growing grass. He stopped to show me the lumber used at a construction site. Dad was being more than my eyes -- he shared all his perceptive, inquisitive senses.

As we approached the boardwalk, the ocean just beyond began to speak in many voices. There was, of course, the low rumble you could hear from far away, but now there was the swish of water going in and out, like a great beast inhaling and exhaling. I imagined that each wave traveled its own separate path, all the way from Europe.

Tonight's trip was only a short one. We were already at the little turn by Second Avenue. We would have to go back soon; it was getting dark.

The bike coming towards us was going fast, much faster than we were. For a second, I heard the hum of its tires vibrating on the boardwalk. I felt Dad swerve our bike before he could explain to me why he was doing it.

At first it appeared that the other bike had just grazed our front wheel. But the collision had caused us to start shaking. Although we kept moving forward, we were swaying more and more. Finally, still going forward, we fell.

For the first time, I realized that Dad was not invincible.

Neither of us was hurt and I am sure Dad forgot about it quickly. But there was a lesson here that Dad had not intended to teach me. For the first time, I realized that Dad was not invincible. Vaguely, I sensed that some day he would not be there to guide me.

As if to allay my fears about the future, Dad managed to spend more and more time with us as his men's clothing business became more secure. For three or four days a week during each July and August, we spent long days at the beach together, sometimes returning home at dusk. There were surprise trips to New York. Through Dad, I toured the captain's quarters of a ferryboat, and met real live New York Yankees.

He took us to a play about a pogo stick. When we got home, I heard a loud thumping in the living room. It was Dad, of course, jumping on a pogo stick which he had bought for us.

That energy to spare could almost convince me that somehow he wasn't growing older. If anything, he showed more concern for my coming of age than for his own aging. He taught me the importance of standing up to peer pressure. Before I ever signed a check, Dad had convinced me of the necessity of saving half a year's salary before indulging in any luxury.

As I became more independent, he taught me one of his favorite decision-making criteria: "What difference will it make in ten years?" He used it to show me that it was better to miss school for a day to keep a cold from becoming worse, and okay to "quit" the wrestling team to join the glee club. I hear Dad's question often now, as my own supply of years dwindles.

As a social work student, I saw people the same age as Dad who had decided that they didn't want to leave their homes anymore. Others filled their days with pains, doctors, and medicines.

While some of my clients clamored for care, Dad made it his business to help others out even before he was asked. Thanks to him, the grass on the nearby shul property was cut. He was more than happy to watch a child if a neighbor went on an errand. On my wedding day, when I lifted my foot to break the glass under the chuppah, my hand instinctively reached out and Dad's supporting shoulder was there.

If Dad had health problems, his children only learned about them after the cure. There was the hernia operation in Montreal, and the minor growths on his wrist and nose that the doctors removed, warning him, "Don't stay out in the sun too much." But Dad visited the beach from May to October, pushing the beach chairs in a baby carriage so old that no self-respecting thief would steal it. When he had a melanoma removed in 1988, the main complaint seemed to be that now he really did have to stay in the shade.

Other than check-ups every few months, he continued as usual. There were still lessons: how to organize closets and finances, how to find the best clothing buys, how to look for the easiest way to get something done, and how to keep my job from interfering with family life.

Dad had been nicknamed Foxy, a grandfather to other people's children, ever since the time his own children didn't let him hug them in public anymore. But in May, 1989, he acquired a new name: Zayda. Now the message on his answering machine changed to "I can't talk to you now, because I'm out playing with my new granddaughter, Rachel."

He had six weeks to experience this child of my sister with pure joy. In July, 1989, the doctors found a spot on Dad's lung.

My parents tried to treat this latest health crisis like all the medical problems of the past. This was especially so because my wife, Chavi, and I were expecting our first child.

The bicycle ride of so many years ago came to mind. The collision had happened.

I learned about the spot on his lung only as they were preparing Dad for the operation. The bicycle ride of so many years ago came to mind. The collision had happened.

I visited him on the eve of Yom Kippur. I clung to my Braille book of Psalms as I traveled, thinking about my father and his unborn grandchild, pondering whom God would seal in the Book of Life for the coming year.

On the surface, we talked about recovery. But I got the sense that Dad, too, had realized that the collision had happened.

He was in pain from the operation, but Dad was still continuing to be a teacher. Now Mom was his student, even as she took increasing responsibility for his constant care. He taught her all the details she had never needed to know before. He began organizing all his papers for her, the insurance, the bills, the bank accounts, the monthly and quarterly and yearly obligations of all sorts.

Our daughter Tehilah arrived eight days later, and Dad visited her two weeks after that. When he held her, it was as if he wanted to impart in some magic way all that he had learned, so that the success for which he had struggled would come more easily to her.

He lost weight. A surgeon in Florida told him that the cancer had spread to his stomach and that in all likelihood he had only a few months to live. When I prayed during Grace after Meals, "May the All-Merciful bless my father, my mother, my wife, my child…" I thought about the fragile thread that linked three generations.

I got the feeling that my father had known, even before the surgeon informed him, that he did not have much time to live. If there was anger and grief, we children were shielded from it yet again. He began investigating the hospice movement, considering it as a way that he could die at home, as peacefully as possible.

He put up a front for the scores of people who visited him. The conversation was always about them. He was still Foxy to his honorary grandchildren. Only when they went away did he let my mother know about some of the pain, and succumb to sleep.

When I visited him in December, we shared the home movies that he preserved for us on videotape. It was a way of thanking him for many happy memories, and beginning to say goodbye.

By late January, he had made the final hospice arrangements, increased his intake of morphine, and now only had five minutes or so every few hours during which he could communicate with anybody. He would let my mom know who it was he wanted to speak to. My sister, my brother, and I, visiting at different times, waited to be summoned.

I recited the Vidui, the Final Confession, with him. He had already made his own peace with God, long before the formal prayer. If this is Your will, he seemed to say as it became ever harder for him to maintain himself, I accept it.

My plane was leaving in two hours. I went in to say goodbye. I had dreaded this minute most of all. "Goodbye for now," we said. We were both relieved that we had managed to say something.

I wanted to back out of the room, the way I heard one does from a royal presence. I wanted to make up for all those times I had not respected him. But he wouldn't have understood, so I turned and walked out slowly.

"A little to your right," he said. I was not so familiar with their Florida house and, as always, reflexively, he was teaching me another lesson.

On February 14, 1990, he stopped eating. In the middle of the night, my mother could hear from the monitor that he was no longer breathing.

He started breathing again, and then, as if he were consciously accepting God's decision, he stopped. Those who have learned to keep their balance as they travel through life know how to end the journey with dignity.

My son Aharon, who was born 20 months after my father died, bears his grandfather's name. Someday I hope he will understand one last truth that my father taught me -- one final lesson that lifted me through my grief: Though the teacher must fall, his teachings remain to steer his offspring for many generations to come.

How to Speak to a Pregnant Woman

There Is No Such Thing as Work/Life Balance