The Book of Ira 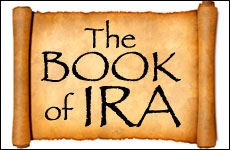 Scholars unearth an ancient work similar to the Book of Jonah. Similar but at the same time, very different.

JEWLARIOUS SATIRE (Remember, it's just satire.... a joke, meant to be funny): The 1947 discovery of the Dead Sea Scrolls at Qumran is perhaps the most significant finding in the history of biblical archaeology, remarkable not only for its religious and historical significance but also for the unprecedented quantity of documents recovered: more than 900. The volume of material was so great, in fact, that to date not all it has been translated, let alone annotated or published.

Recently, Oxford University Press, publishers of the 39-volume set containing translations of most of the Qumran documents, announced the long-anticipated release of one of the heretofore unpublished scrolls, the enigmatic Sefer Eerah, The Book of Ira. Related thematically, if not linguistically, to The Book of Jonah, The Book of Ira likewise recounts the triumphs and tribulations of a complex and inscrutable prophet.

Now, in a special arrangement with Oxford University Press, Jewlarious.com is pleased to present an exclusive excerpt from the upcoming publication of The Book of Ira, including not only a faithful translation but annotations from esteemed commentarians.

The Book of Ira: Chapter 1

The word of the LORD came to Ira Gottlieb, New Jersey orthodontist, saying: Arise, go to Hackensack and cry out against it, for its wickedness has been made known to Me. You'll want to take the Garden State, what with construction on the Parkway. [1]

But Ira rose up to flee unto Secaucus, away from the presence of the LORD, but what, at 51 he's going to start listening all of a sudden? [2]

And the LORD sent a great wind across the earth, and a mighty storm threatened to make traffic even worse, if you can believe this. Ira became exceedingly afraid. He pulled off at the next exit, saw a diner there, and did go down into it.

And Ira made haste as he went into the diner, for the storm grew in fierceness, yet mightier than before. Ira's garments were laden with water, for he had not foreseen the coming of the tempest, but what -- he's a weatherman now?

Now there were three men there at the counter, what with their coffee. Ira, a stranger to the men, sat among them. The men, seeing that the storm grew worse as Ira did enter, said unto him: "Hey, did you bring the storm with you, pal?" But Ira did not hear the men's words, for he was looking at the specials. [3]

Then the power in the diner did go out: the lights, the pie case, the whole thing. The men and the waitress who was there grew exceedingly afraid. They knew that it was Ira who had brought this misfortune upon them.

Now the countenances of the men did grow stern. And they said unto him, "Hey, mister, what's your deal, anyway?" [4] And Ira said unto them, "My name is Ira. I am an orthodontist." And unto the waitress he said, "Miss, do you have fat-free salad dressing?"

And the men knew that Ira was fleeing the word of the LORD, for he told them. And the men looked at him like he was some kind of crazy person. This vexed Ira greatly, what with his stomach.

Then the countenances of the men did change, and they forgot their loathing for Ira. And it stopped with the raining already.

The forthcoming Oxford edition of The Book of Ira contains a foreword by Robert Alter, in which the renowned biblical historian discusses BOI's theological and literary import, as well as a philological analysis of a single passage in BOI's second chapter, in which Ira proclaims, "I cried by reason of mine affliction unto the LORD; out of the belly of Sheol cried I," to which his mother replies, "What -- and they don't have phones in Sheol? Not that I could answer it anyway, what with my bursitis."

[1] Much of the language in The Book of Ira (BOI) is esoteric and without extrabiblical equivalent, thus making translation interpretive at best. Though much of the Hebrew in BOI—or-to-don-teest, for example—bears a striking resemblance to contemporary English, linguistically the connection is impossible.
[2] Scholars question whether "Hackensack," "Secaucus," and other place names in BOI were actual geographical locations or poetic inventions of the author. It is generally accepted that the word "Jersey, " for example, is derived from the Hebrew nazar, meaning "consecrate," likely making "New Jersey" a metaphor for a sacred and pristine land.
[3] "Special" is used here as a device to exemplify Ira's extraordinary circumstance, which finds him not only as a stranger among foreign—and possibly hostile—company, but perhaps as a stranger to himself, a fugitive of his calling.
[4] Though predating existentialism by two millennia, The Book of Ira posits an almost Nietzschean dilemma, defying the reader to ascertain whether Ira's plight was self-induced or predestined.
[5] The Hebrew Bible contains myriad references to sea creatures of abstruse form, from the taninim present at Creation to Job's Leviathan, the ubiquitous biblical monster that came to personify chaos. Scholars disagree as to the nature of this "whitefish salad" beast, though some suggest it was a rare species of porpoise.